Donald Trump
stated on November 16, 2020 in a tweet:
"Big victory moments ago in the State of Nevada. The all Democrat County Commissioner race, on same ballot as President, just thrown out because of large scale voter discrepancy."

President Donald Trump speaks in the Rose Garden of the White House in Washington on Nov. 13, 2020. (AP/Vucci)

President Donald Trump declared a "big victory" in his flailing efforts to overturn the election results in Nevada, falsely claiming that one county’s move to redo a close down-ballot contest would have a "major impact" on the race he lost to President-elect Joe Biden.

"Big victory moments ago in the State of Nevada," Trump wrote Nov. 16 in a retweet of a post by Adam Laxalt, a campaign co-chair in Nevada. "The all Democrat County Commissioner race, on same ballot as President, just thrown out because of large scale voter discrepancy.

Big victory moments ago in the State of Nevada. The all Democrat County Commissioner race, on same ballot as President, just thrown out because of large scale voter discrepancy. Clark County officials do not have confidence in their own election security. Major impact! https://t.co/TLHnFKNN6g

"Clark County officials do not have confidence in their own election security," he added.

Trump’s claim was debunked by local and national news outlets, reporters and fact-checkers, including the Nevada Independent reporter whose coverage of the County Commission’s meeting to certify the results prompted Laxalt’s original tweet.

In reality, the news out of Nevada’s most populous county was not a "big victory" for Trump — nor did it reveal any evidence of widespread voter fraud, as other allies of the president claimed. On the contrary, Trump’s tweet was wrong or misleading in at least three ways:

"This isn't accurate," wrote Erik Pappa, a spokesperson for the county, in a reply to Trump’s tweet. "The @ClarkCountyNV Commission today certified the results in each race except for 1 local race where there was a 10-vote difference & more than 10 discrepancies."

The Trump campaign did not respond to a request for comment.

The episode in Nevada is Trump’s latest attempt to highlight a small irregularity as proof of his false claims that the election was stolen by voter fraud.

But the reality is not nearly the firestorm that Trump made it out to be.

On Nov. 16, the Clark County commissioners voted to certify the results of all the county’s elections except for one. The lone exception was the tightly contested race for the County Commission seat representing District C, an area that includes parts of Las Vegas.

The commission moved to send that race to a special election because the margin of victory was too small to rule out the possibility that it was affected by discrepancies among ballots, which were also limited in number. There were 153,162 ballots cast in District C, and Democrat Ross Miller received just 10 more votes than Republican Stavros Anthony.

Joe Gloria, the Clark County registrar of voters, told the county commission that among those 153,162 ballots, his office identified discrepancies involving 139 of them, or roughly 0.091%.

"That’s the only race in the entire election where we have any concern related to the outcome, and it’s because of the close margin," Gloria, the elections chief, told the county commissioners.

Discrepancies are common, Gloria said. They are not necessarily indicative of fraud. For example, they can occur when people vote more than once, when ballots are inadvertently canceled, when signatures on mail ballots cannot be verified, or when there is a different number of voter check-ins recorded at a voting site than actual ballots cast.

"There is no election that goes without discrepancies that are identified," Gloria said, adding that although the number of discrepancies was relatively low, it could still affect a 10-vote margin. 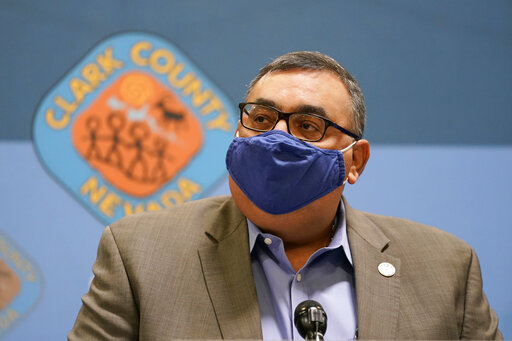 The Nevada Independent reported that the discrepancies cannot be reconciled through a recount because the privacy of ballots prevents canvassers from recording personal information that could help them track down the people who turned in faulty ballots.

Nevada has a history of holding special elections in down-ballot races when the results are too close to certify. They did so in 2018, when Republican primary candidates in the race for public administrator were separated by just four votes, according to the Las Vegas Review-Journal.

"It is important to be transparent with the public," Clark County spokesperson Dan Kulin said in a statement to PolitiFact. "When we find discrepancies, we report them, and when the number of discrepancies is larger than the margin of victory, we hold a runoff election."

In Clark County more broadly, Gloria reported that there were 936 discrepancies identified out of 974,185 ballots cast, meaning there were problems with 0.096% of all ballots in the county.

That’s a far cry from the "large scale discrepancy" Trump tweeted about.

It’s not a "big victory," either, since it didn’t reveal massive fraud or change the fact that Trump lost Nevada. Gloria said six people voted twice, but the county doesn’t know if those incidents were fraud.

The results of every other election in Clark County were certified, including the results of the presidential election. Biden received more than 90,000 more votes than Trump in the county, and he leads Trump by more than 33,000 votes in Nevada.

If the District C race goes to a special election, the race for president will not be on the ballot.

"As the voters can see, this issue did not affect any other outcomes, and to claim otherwise is simply untrue," Kulin told PolitiFact.

Lisa Mayo-DeRiso, the campaign manager for the Republican candidate in the race for the District C County Commission seat, distanced the campaign from Trump’s claims.

Mayo-DeRiso told the Nevada Independent that the campaign "has never subscribed to the conspiracy side of that" with regard to the discrepancies.

Miller, the Democratic candidate, has sued to prevent the race from going to a special election. The Trump campaign has filed a lawsuit asking the court to overturn the results of Nevada’s election in favor of Trump or annul the results entirely, the Nevada Independent reported.

Trump claimed, "Big victory moments ago in the State of Nevada. The all Democrat County Commissioner race, on same ballot as President, just thrown out because of large scale voter discrepancy."

The Clark County Commission declined to certify the results of one local race where there was a 10-vote difference and more than 10 discrepancies with ballots.

The discrepancies were not "large scale." They were limited to less than one-tenth of a percent of ballots. And the news is not a "big victory" for Trump, since it does not change the results of the presidential election in Clark County, which the commission certified.

The race that may go to a special election was not "all Democrat," either.

This fact check is available at IFCN’s 2020 US Elections FactChat #Chatbot on WhatsApp. Click here for more.

The Washington Post, "Trump and allies pitch yet another woeful voter-fraud theory in Nevada," Nov. 17, 2020

The Associated Press, "Election Lawsuits Fly in Nevada Ahead of Vote Certification,' Nov. 17, 2020