Internet users are circulating screen grabs from an old pornographic video and falsely claiming they are newly uncovered images of President Joe Biden naked with a young, bound girl.

The images do not show Biden; they were cribbed from a pornographic video that has been available on pornography websites since at least 2014, reverse image searches show.

But the miscaptioned images spread across the internet after posters on 4chan, a message board notorious for radicalizing mass shooters and giving rise to the QAnon conspiracy theory, claimed to have hacked an iCloud account belonging to Biden’s son, Hunter Biden.

Former President Donald Trump, his allies and social media users who support him have previously fixated on the alleged contents of a laptop tied to the younger Biden.

"Hunter’s laptop. This guy looks familiar. Hmmmm," reads the text under the compilation of images, which was shared across mainstream social media platforms, including Facebook, Instagram and Twitter, as well as on far-right message boards such as patriots.win. 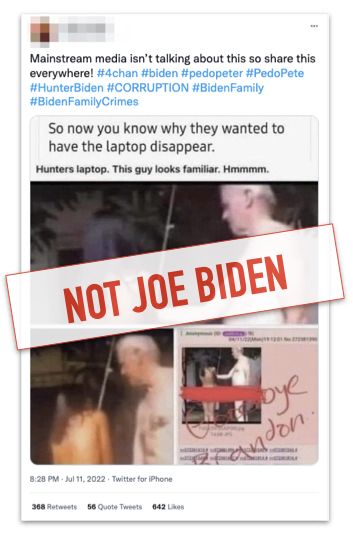 "The President of the United States showered with his daughter and people on this app still blindly follow him," said one July tweet that shared the images.

"Let’s see how long it takes Facebook to remove this photo of their supreme leader on Hunter’s laptop," said a Facebook post sharing the same images the following day.