"Fox offers Chris Wallace's Sunday Spot to Candace Owens," said the July 2 Facebook post, which was shared hundreds of times and flagged as part of Facebook’s efforts to combat false news and misinformation on its News Feed. (Read more about our partnership with Facebook.) 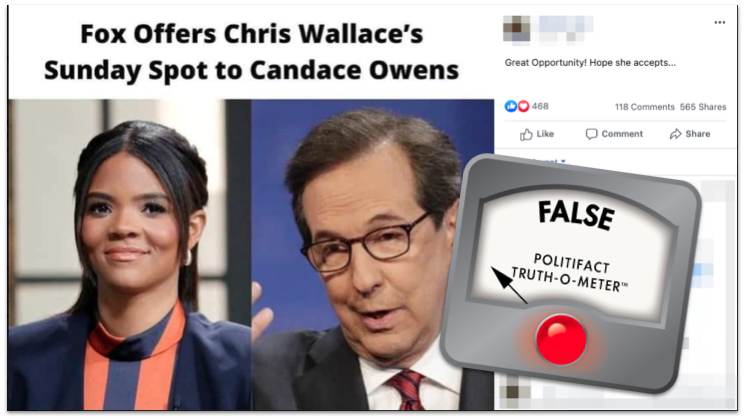 Owens, who did not respond to a request for comment, hosts a show for The Daily Wire. She previously worked for Turning Point USA and founded an effort to get Black voters to leave the Democratic Party. She has not tweeted anything about joining Fox News.

Wallace, the host of "Fox News Sunday," left the network in December 2021 for a role with CNN+, the CNN streaming service that launched in April only to shut down weeks later.

He told The New York Times that he "no longer felt comfortable with the programming at Fox." He said he felt the falsehoods spread by the network’s talk show hosts about the 2020 election and the Jan. 6, 2021, insurrection at the U.S. Capitol were "unsustainable."

In his stead, Fox News handed the "Fox News Sunday" airwaves over to a rotating cast of its other anchors, including Martha MacCallum, Brett Baier and John Roberts. The network has not yet named a permanent host for the show.

Fox News confirmed to PolitiFact that the claim about Owens is fake.

The rumor appears to have originated with "America’s Last Line of Defense," a network of parody websites whose bogus stories have fooled people online for years. In 2017, PolitiFact reported that a man from Maine was operating the sites, writing under a series of pseudonyms.

A headline on one of the "America’s Last Line of Defense" websites matches the text of the widespread Facebook post verbatim — except that it misspelled Owens’ last name.

Poynter, "Chris Wallace talks about leaving Fox News: ‘I just no longer felt comfortable with the programming at Fox,'" March 28, 2022