TikTok posts
stated on July 19, 2022 in a TikTok post:
An image shows Rep. Marjorie Taylor Greene in front of a cross with a figurine of former President Donald Trump on it.

A viral TikTok video purports to show an image of U.S. Rep. Marjorie Taylor Greene, R-Ga., reading the Bible in front of a cross with a giant figurine of former President Donald Trump on it.

"What is hanging in MTG’s office?" reads the text over the TikTok video, which was posted July 19 and accumulated more than 800,000 views and 90,000 likes in approximately two days.

The speaker in the video references a July 19 tweet sharing the same image. Behind Greene, the image shows a large white figurine depicting a mostly naked Trump, with a red hat and his arms and legs pinned to the cross in what resembles a crucifix.

"I found this tweet of Marjorie Taylor Greene reading, and it asks, ‘What’s Marge reading?" the speaker in the TikTok video says, before circling and zooming in on the model of Trump in the tweeted image. "Why is this not satire? Why is this hanging in her room?"

The image in the tweet and TikTok video is digitally altered, however; reverse image searches show that in the original photo, Greene was captured reading in front of a bare cross. 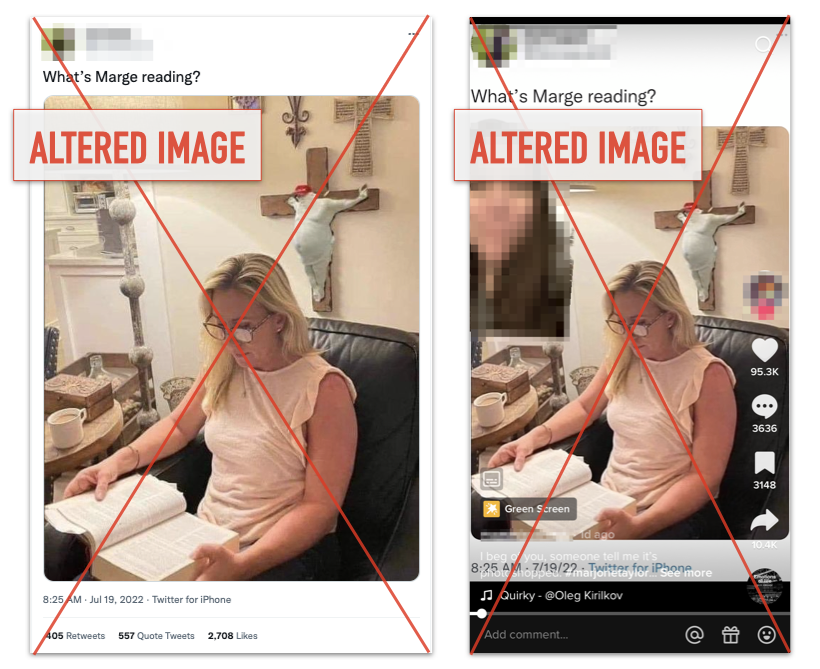 "Totally fake," Greene spokesperson Nick Dyer said of the image in an email to PolitiFact. "And a disgusting attack on her Christian faith."

Greene tweeted the original photo — which showed a cross without the representation of Trump attached to it — from her personal Twitter account in November 2021. That account was later permanently suspended for violating the platform’s policies against spreading COVID-19 misinformation.

"My daily bread," Greene wrote in the original tweet. "It took years for me to read this book, but that time was the greatest investment I’ve ever made. It led me to Him." 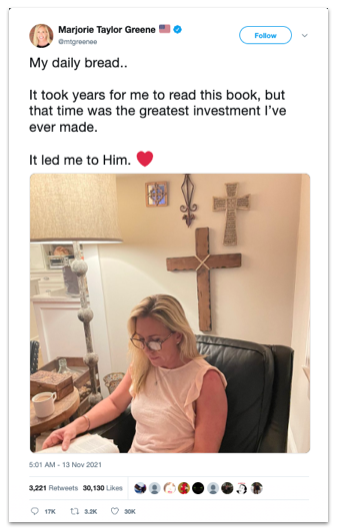 Greene’s office did not immediately respond to a request for comment.