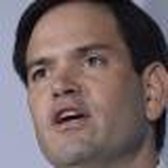 Marco Rubio, a U.S. senator from Florida, was a candidate for president of the United States in 2016 and then dropped out and won re-election to the Senate. He was first elected to the Senate in 2010 and took office Jan. 5, 2011. Rubio served in the Florida House of Representatives from 2000 to 2008 and is a former Speaker of the Florida House. He served on the West Miami City Commission from 1998 to 2000. He is from Miami and holds a law degree from the University of Miami.