Viral image
stated on July 12, 2022 in a viral image:
An image shows an “all aboard the Trump train” truck crashed into a bridge.

An image going viral online purports to show a truck with a pro-Trump message on its trailer crashed into an overpass.

But the image, which spread across Facebook and Twitter in July 2022, was digitally altered to add the words "all aboard the Trump train" to a real photo of a truck accident. 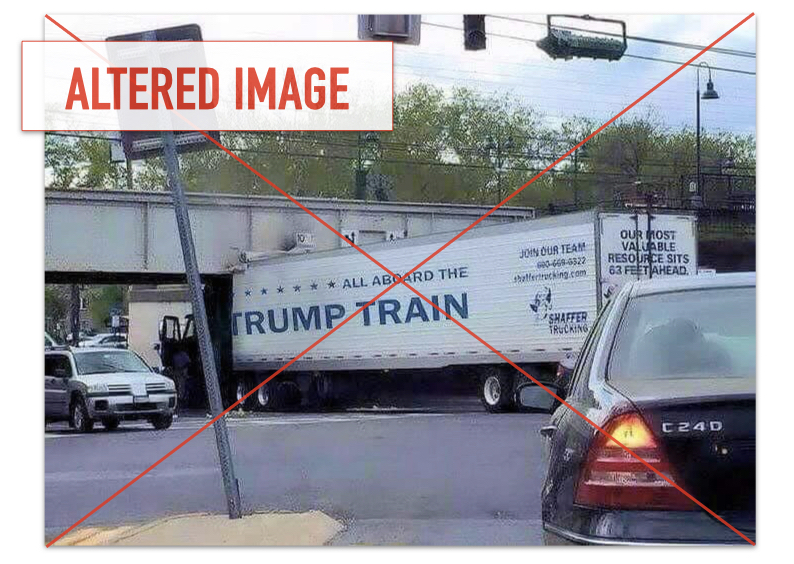 A recent Facebook post sharing the image was flagged as part of Facebook’s efforts to combat false news and misinformation on its News Feed. (Read more about our partnership with Facebook.)

The original photo of the wrecked truck, which has been circulating since May 2015, shows the message on the side of its trailer actually read, "On the road to success, there are no shortcuts."

A local news website in May 2015 published additional photos of the accident that showed the damage to the truck — which could be seen bearing the words "On the road to success, there are no shortcuts" — from other angles. Using those photos, PolitiFact geolocated the crash to a bridge at the intersection of Mamaroneck and Halstead avenues in Mamaroneck, New York.

The edited version of the image, purporting to show "all aboard the Trump train" written on the truck’s trailer, first surfaced in 2018, according to reverse image searches. It circulated again in 2020 as social media users mocked former President Donald Trump, Snopes reported.

We rate this viral image False.

The Loop, "No Shortcuts Around Mamaroneck Avenue Underpass," May 20, 2015