Instagram posts
stated on October 19, 2022 in social media posts:
A House Republican plan says that if the GOP wins the majority, “Retirees who have a pension, IRAs, 401k, disabled veteran benefits will be ineligible for Social Security benefits.”

• The screenshot is fake and does not align with language in the actual House Republican plan as published online.

A phony outline of a House Republican policy plan is making the rounds on social media in the midterm election season’s closing weeks.

At the top, the image includes the logo of the House Republicans’ Commitment to America, a policy manifesto for the 2022 midterm elections.

The text is as follows:

"Entitlements are bankrupting our country and the future of our children. Republicans are the only Party with a plan to address our fiscal crisis and commit to the following if you give us the majority in November.

"Raise the age for Medicare eligibility to 75 and eligibility ends for anyone over the age of 90.

"These simple steps will put our country back on the path of prosperity and ensure a bright future for our children and grandchildren." 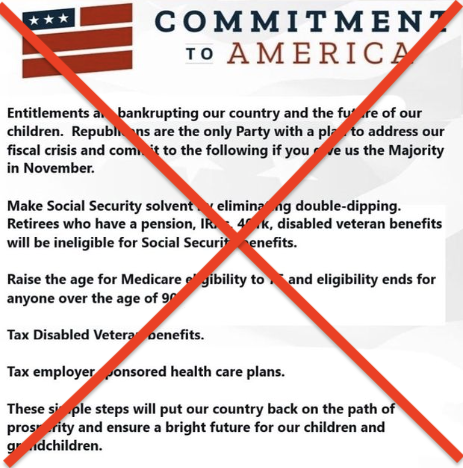 Occupy Democrats
stated on January 12, 2023 in a Facebook post
"Social Security has nothing to do with the deficit or the national debt."

We found several versions of this post on Instagram. One version on TikTok shares the screenshot along with video of the poster expressing uncertainty about whether it’s from a genuine document.

These policies are not commonly offered by the major political parties, which historically treat Social Security and Medicare as the "third rail" of politics — touch it and you die.

The Republican Party under President George W. Bush looked into privatizing Social Security by making the program more like a 401(k), with a portion invested in stocks and other financial vehicles and with decisions controlled by the recipient. Since the program’s founding, the federal government has paid Social Security from a government-held trust fund.

The backlash, especially among older Americans, was swift, and Bush-era Republicans backed off. But even that proposal didn’t go as far as the one in the screenshot would.

Even a Bush-style privatized program would not have eliminated Social Security for people who had 401(k) plans, pensions, or disability benefits, as the screenshot suggests that House Republicans would do. Nor would it have raised the Medicare age to 75 and ended the program for everyone older than 90. Both proposals would affect many millions of retired Americans.

House Republicans did produce a policy agenda called the Commitment to America, but it does not go nearly as far as the language in the screenshot.

Google searches of the text of the individual elements of the "plan" did not produce anything from House Republicans, either. The office of House Minority Leader Kevin McCarthy, R-Calif., did not respond to an inquiry for this article.

Instagram posts shared a screenshot showing a purported House Republican plan that says that if the GOP wins the majority, "Retirees who have a pension, IRAs, 401k, disabled veteran benefits will be ineligible for Social Security benefits."

The screenshot is fake and does not align with language in the actual House Republican plan.

We rate the posts Pants on Fire!