One day after a shooter opened fire on a Tops supermarket in Buffalo, New York, a local news station based in Orlando ran a report from the scene of the massacre.

The segment that WKMG ran was a package shared from a partner affiliate in Houston, KPRC, featuring a report that KPRC reporter Brandon Walker filmed from Buffalo.

"Good evening to you from Buffalo, the northeast side of town," Walker said in the May 15 report as he stood outside the supermarket, yellow police tape still stretched behind him.

"Tonight, as FBI investigators continue to process the scene inside Tops Friendly Market, community members reflect on how they feel," Walker said. "There's a lot of sadness, a lot of anger, too, over the racism they say fueled 18-year-old Payton Gendron’s actions."

The problem: Walker was wrongly introduced by WKMG anchor Erik von Ancken as "Walker Graham," and the chyron at the bottom of the screen identified him the same way.

In a statement to PolitiFact, WKMG’s assignment desk said the script the station received from KPRC listed Walker’s name as "Walker Graham," and the error was carried over onto the air. At the end of his report, Walker signed off by saying, "I’m Brandon Walker."

But across social media, the mixup was a sign of something more nefarious, a conspiracy in which Walker was playing the role of a reporter as a "crisis actor" on the set of a staged attack.

The "crisis actor" claims started with a tweet that put a photo of Walker’s report for WKMG, in which he’s listed as "Walker Graham," next to a report he did for KPRC under the correct name.

"So he just got two different names depending on the news station?" said the May 16 tweet. "One day people, one day you’ll realize why people like me question EVERYTHING."

Screenshots of the tweet quickly spread to Instagram and Facebook, where they were flagged as part of Facebook’s efforts to combat false news and misinformation on its News Feed. (Read more about our partnership with Facebook.)

Among the people pushing the false "crisis actor" claim was Lauren Witzke, the far-right GOP nominee for a 2020 U.S. Senate seat from Delaware, who has promoted the QAnon conspiracy theory. "New Buffalo crisis actor just dropped," Witzke said in posts on Telegram and Instagram. 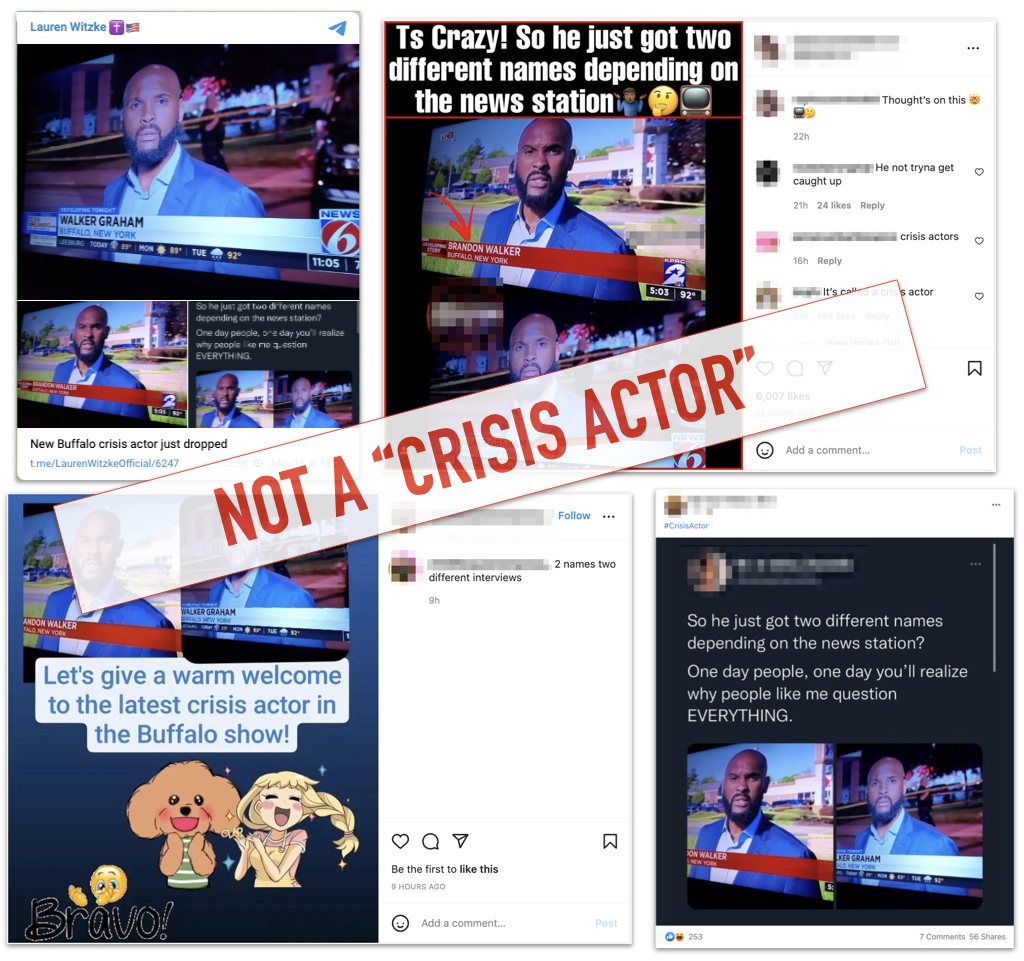 PolitiFact previously debunked a Pants on Fire claim that Gendron, who was charged for the shooting, was a "crisis actor." There is no evidence that the attack was staged or a "false flag." There were multiple witnesses, and the shooter live streamed the assault.

This claim about Walker is also baseless.

"This is a real reporter," WKMG’s assignment desk said in its statement to PolitiFact. Walker has worked for KPRC since 2015, according to his bio on the KPRC website.

In a reply to the original tweet that set off the "crisis actor" conspiracy theory, Walker wrote: "Seems my colleagues at a sister station don’t know my name. Brandon Walker, it is. I work for a station in Houston, KPRC2; however, I’ve filed reports for our sister stations in other cities."

Walker and KPRC did not immediately respond to emailed requests for comment.

Another Houston-area journalist tweeted that KPRC and WKMG both are owned by Graham Media Group, a broadcasting company, which might have prompted the "Walker Graham" error.

We rate these "crisis actor" claims Pants on Fire!

CNN, "The congressional candidates who have engaged with the QAnon conspiracy theory," Oct. 30, 2020