Thomas Massie
stated on January 30, 2022 in a tweet:
Says Voltaire said, “To learn who rules over you, simply find out who you are not allowed to criticize.”

Rep. Thomas Massie, R-Ky., attempted to take a swipe at Dr. Anthony Fauci, the White House’s chief medical adviser, with a quote appearing to come from a deep thinker.

"To learn who rules over you, simply find out who you are not allowed to criticize," said the quote, which was credited to Voltaire, the French writer and philosopher, in the image Massie shared.

"You mustn’t question Fauci, for he is science," Massie wrote above the quote.

The same quote and citation are also circulating on Facebook. But Voltaire didn’t say this.

The original speaker is Kevin Alfred Strom, a white nationalist and Holocaust denier who founded the neo-Nazi group National Vanguard in 2005, according to the Southern Poverty Law Center. He pleaded guilty in 2008 to possession of child pornography and was sentenced to 23 months in prison. 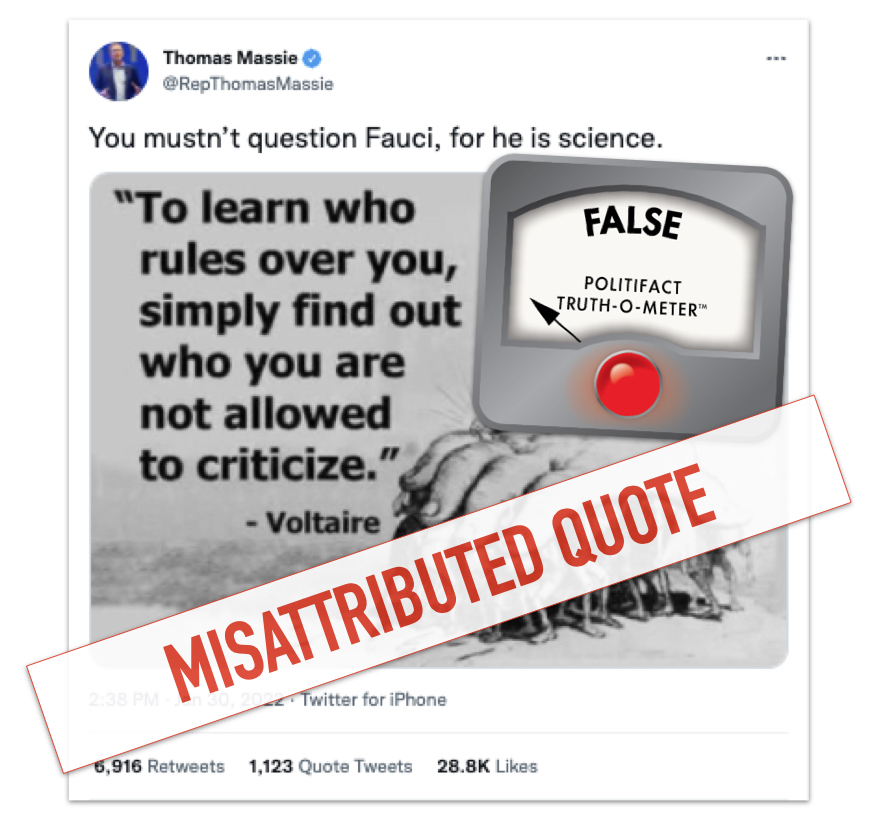 The quote does not appear in Voltaire’s writings or correspondence, but it is widely passed off as something he said. An Australian politician misattributed the line to the Enlightenment-era thinker in 2015. Actor John Cusack made the same error four years later.

Strom’s original quote was worded slightly differently. He was specifically talking about Jewish people when he said it during a 1993 broadcast on an alt-right radio program.

"To determine the true rulers of any society, all you must do is ask yourself this question: Who is it that I am not permitted to criticize?" Strom said.

Etymologist Barry Popik noticed the misattribution to Voltaire happening in 2012 and traced the quote back to Strom. Strom lamented in a 2009 blog post that what he said was commonly misquoted. Strom claimed credit for the quote in 2017, noting that the one-liner was "almost always attributed" to Voltaire but was actually his.

Strom said he found it "kind of flattering" for his thoughts to be attached to Voltaire’s name.

Massie’s tweet was shared thousands of times, including by Fox News contributor Sara A. Carter. The post was panned by many others, who pointed out the quote’s origin.

"This quote is from neo-Nazi, Holocaust-denier, and convicted pedophile Kevin Alfred Strom, not Voltaire," tweeted the American Jewish Committee, a Jewish advocacy group. "We expect better of our representatives in Congress."

The University of Western Australia's Paul Gibbard, a leading expert on Voltaire, told the Guardian in 2015 that the quote from Strom was "not un-Voltarian" in its "spirit" because it captured his resistance to authority. But Gibbard added: "There are lots of quotations that are attributed to Voltaire that aren’t actually by him, and that’s one of them."

The University of Oxford’s Voltaire Foundation has said the same. Still, the misattributed quote has required debunking by various fact-checkers, again and again.

Massie’s office did not respond to a request for comment.

Check Your Fact, "Fact Check: Did Voltaire Say, ‘To Learn Who Rules Over You, Simply Find Out Who You Are Not Allowed to Criticize," Oct. 2, 2019