Shortly after Tesla CEO Elon Musk reached a deal to purchase Twitter, a viral social media rumor took off that falsely claimed Musk, the world’s richest man, had immediately banned from the platform another man who once held that title: Bill Gates.

The same image also appeared in posts on Facebook and Instagram, which were flagged as part of Facebook’s efforts to combat false news and misinformation on its News Feed. (Read more about our partnership with Facebook.) Some posts were labeled as jokes. Others were not.

A Twitter spokesperson confirmed to PolitiFact that the company has not taken enforcement action against the Microsoft founder’s account. The @BillGates account remains active on the site. Gates has tweeted three times since the Musk deal was announced.

A spokesperson for Gates also confirmed that the rumors of his suspension were false. 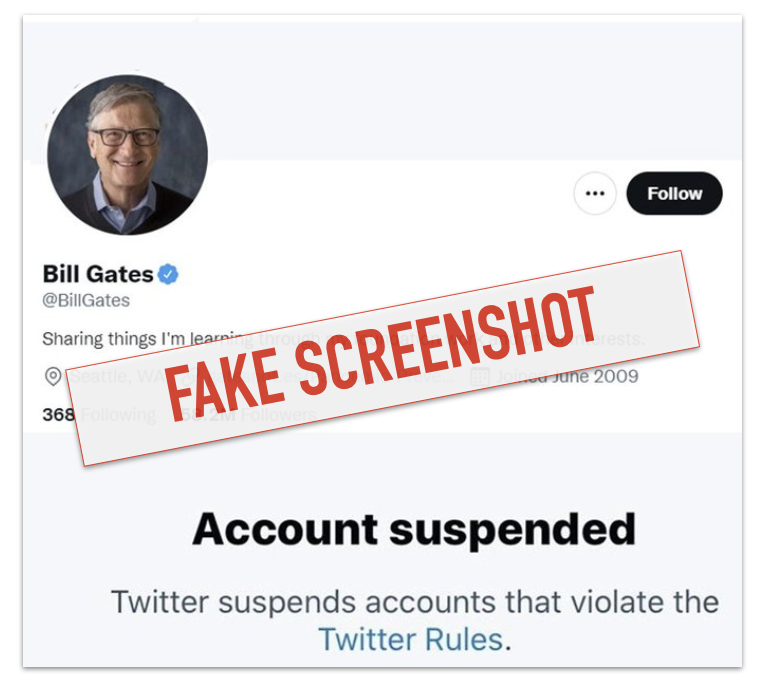 There were other telltale signs that the image was fake.

It showed Gates’ profile image, written bio, follower count and other account details still on his page. But these details are typically removed or grayed out on suspended Twitter accounts, as they were on the @realDonaldTrump account belonging to former President Donald Trump and the @mtgreenee account belonging to Rep. Marjorie Taylor Greene, R-Ga.

Plus, the deal with Musk is expected to officially close later in the year, according to reports. The New York Times reported that Twitter’s CEO estimated it could take three to six months.

Musk has tweeted criticism of Gates in recent days, but he has not signaled his intention to suspend Gates from the platform he’s set to acquire. Musk said he hopes "even my worst critics remain on Twitter, because that is what free speech means."