"The US Presidential Administration dedicated two commemorative coins in the ‘Historical Moments’ series to Ukraine and its President Volodymyr Zelenskyy," said another post on Twitter sharing the same images.

The posts and others like them were flagged as part of Facebook’s efforts to combat false news and misinformation on its News Feed. (Read more about our partnership with Facebook.) 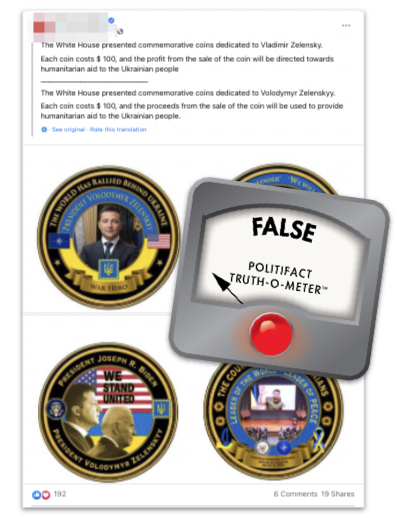 Despite what the posts suggest, the commemorative coins were created by a private company, not President Joe Biden’s White House.

But there is a reason for the confusion: the private store responsible for the coins is called the White House Gift Shop. PolitiFact previously fact-checked false internet rumors that former President Donald Trump was selling coronavirus-themed coins for profit when, in reality, the coins had been created by the same private gift shop.

Reverse image searches revealed that the two Zelenskyy coins were selling for $100 each on the White House Gift Shop’s website, and were advertised several times on Twitter. One of the coins is marketed as honoring Zelenskyy. The other recognizes an address he gave Congress.

The online store says on its "about us" page that it was connected to the White House decades ago, when it would provide flowers to the family of fallen White House police officers and gifts to retiring officers. But Anthony Giannini, the shop’s CEO who took over the shop years ago during the Obama administration, said that the store is now fully privatized.

In a statement to PolitiFact, Giannini refuted the "propaganda that President Biden is behind the Ukraine Heroes coin that I designed, which, of course, is not the case."

The Associated Press reported that the shop used to have a physical location in Washington but now runs its business online with a distribution center in Rochester, Michigan.

The nonprofit White House Historical Association — which runs two retail shops located near the White House in Washington, including one at the White House Visitor Center — confirmed to PolitiFact that its stores are not selling the commemorative Zelenskyy coins. There is no mention of the coins on the White House’s official government website, either.