Social media posts falsely claim ballots from Maricopa County in Arizona were shredded and burned in a chicken farm fire. We rate that Pants on Fire! (Shutterstock image)

The partisan, Republican-led audit of state-certified election results in Arizona’s Maricopa County is fueling yet another baseless rumor online, as some social media users suggest that a county official intentionally destroyed ballots in a fire at his family’s chicken farm.

"A friend called me when they found out ballots were shredded at the farm," said one such post uploaded to Instagram on May 20. "An hour later it was on fire. The fire burned two huge barns. It killed 162,000 egg laying hens. (Clint) Hickman is the Chairman of the Maricopa County Board of Supervisors. He owns Hickman Egg Farms. This was no coincidence."

There’s no evidence that Maricopa County ballots were destroyed in a fire at a chicken farm. Maricopa County Recorder Stephen Richer, a Republican, said May 18 that the chicken-farm rumor is the "the craziest conspiracy theory by far" to come out of the state GOP’s audit.

"The craziest conspiracy theory by far is that one of the board of supervisors, who happens to own a very large chicken farm, took ballots from the 2020 election, fed them to 165,000 chickens and then had them incinerated," Richer told CNN’s Don Lemon. "Now, what actually happened is that this poor man had a serious fire at one of his barns, and 165,000 chickens did die. But the idea that they had ballots inside of them … that's facially laughable." 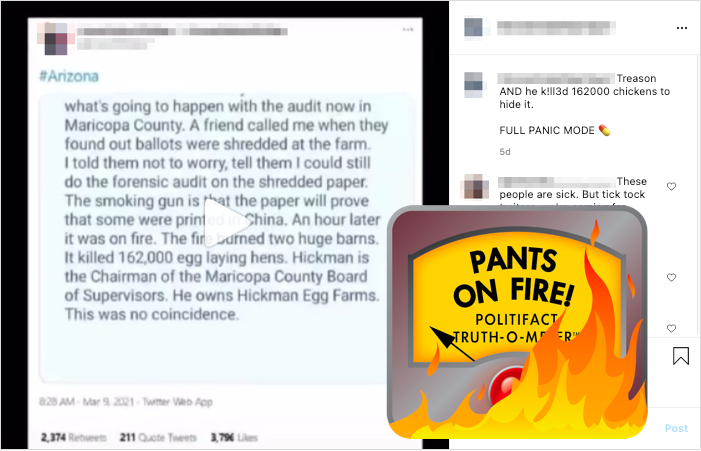 A screenshot of a May 20, 2021, Instagram post falsely suggesting 2020 general election ballots from Maricopa County, Arizona, were burned in a chicken farm fire.

Hickman — who is not the chairman, but is a one of five elected district supervisors in Maricopa County — is also the vice president of sales and marketing at Hickman’s Family Farms, which lost two barns and over 165,000 chickens to a fire in March, according to the Arizona Republic. The fire took place at a location in Arlington, Arizona, about an hour west of Phoenix.

The Maricopa County Sheriff’s Office, which investigated the cause of the fire at the farm, said in a statement that the investigation "revealed there was no evidence of a crime."

"The cause of the fire was listed as unknown," the statement said. "The arson investigation revealed no election ballots."

The Buckeye Valley Fire District, whose firefighters responded to the scene, also told Snopes there was no evidence of wrongdoing and no evidence that ballots were destroyed at the site.

Blake Masters
stated on May 14, 2022 in a tweet
“Democrats want open borders so they can bring in and amnesty tens of millions of illegal aliens — that’s their electoral strategy.”

The Gateway Pundit published two articles on March 6 about ballots in Maricopa County. The first alleged that "dumpsters full of shredded ballots" had been found in the county. The second was headlined: "After Finding Shredded Ballots in the Dumpster Earlier Today — A Mysterious Fire Breaks Out at Maricopa County Official’s Farm."

PolitiFact fact-checked the first of those two articles and rated the Gateway Pundit’s claim about shredded ballots in a dumpster False. Gilbertson told us then that all ballots for the 2020 general election were in a vault and under surveillance.

State law requires counties to keep ballots for 24 months after an election is canvassed.

"No ballots from the 2020 General Election were ever removed from the vault at the Elections Department until we had to prepare them for transport to the Arizona Senate," Gilbertson said in reference to the new chicken-farm claims, which she called "false accusations."

The county’s ballots were transported on April 22 to the Arizona Veterans Memorial Coliseum in Phoenix for the partisan-driven audit.

Hickman and Hickman’s Family Farms did not respond to requests for comment. The Arizona state Republicans’ liaison for the audit declined to comment.

There were nearly 2.1 million ballots cast in Maricopa County in the 2020 general election, which saw Arizona vote for President Joe Biden. Maricopa County conducted a hand count audit of a sample of ballots, as is required by state law, and it hired independent firms to conduct a forensic audit of tabulation equipment. The county found no abnormalities.

National, state and local officials affirmed that Biden won a free and fair election, as judges across the country rejected lawsuits aimed at overturning the election in favor of former President Donald Trump. There remains no evidence of widespread voter fraud.

An Instagram post claimed that Arizona ballots were shredded and burned in a fire at a Maricopa County official's family chicken farm.

A fire did break out in March at a family chicken farm connected to an elected official on the Maricopa County Board of Supervisors. But an investigation by the Maricopa County Sheriff’s Office found no evidence of a crime — and no election ballots.

Maricopa County stored all ballots for the 2020 general election securely in a vault until they were transported on April 22 — more than a month after the fire — for the audit led by state Senate Republicans, an elections department spokesperson said. Richer, the county recorder, called the chicken-farm rumor "the craziest conspiracy theory by far" related to the audit.

We rate this statement Pants on Fire!

Snopes, "No, Maricopa County Ballots Weren’t Destroyed in a Chicken Farm Fire," May 19, 2021

The Gateway Pundit, "After Finding Shredded Ballots in the Dumpster Earlier Today – A Mysterious Fire Breaks Out at Maricopa County Official’s Farm," March 6, 2021

PolitiFact, "No proof for pro-Trump conspiracy theory of secret watermarks on Ariz. ballots," May 4, 2021