Jeanine Pirro
stated on March 20, 2021 in a TV segment:
The southern U.S. border “is now open to anyone from anywhere in the world who wishes to enter our country.”

A U.S. Customs and Border Protection agent looks on near a gate on the U.S.-Mexico border wall as agents take migrants into custody, Sunday, March 21, 2021, in Abram-Perezville, Texas. (AP/Cortez)

Fox News host Jeanine Pirro accused President Joe Biden of having "surrendered our southern border," falsely claiming the new administration is allowing anyone to cross freely into the U.S.

"It is now open to anyone from anywhere in the world who wishes to enter our country, leaving one to wonder whether America is a sovereign nation anymore or a simple globalist landing spot," Pirro said in a March 20 TV segment, which circulated widely on Facebook.

The clip was flagged as part of Facebook’s efforts to combat false news and misinformation on its News Feed. (Read more about our partnership with Facebook.)

The number of migrants at the U.S. border with Mexico has swelled in recent months. But the border is not open for anyone to cross, immigration experts said, despite Pirro’s claim, which suggested that there is no legitimate enforcement at the border.

"That claim is patently absurd," said Nicole Hallett, an associate clinical professor of law and the director of the Immigrants’ Rights Clinic at the University of Chicago. "The border has never been ‘open to anyone from anywhere in the world who now wishes to enter our country.’"

U.S. Customs and Border Protection data shows that most migrants they encounter arriving at the southern border are still being immediately expelled under a section of federal law former President Donald Trump invoked in March 2020 to curb the spread of COVID-19. In February, about 72% of the encounters CBP recorded at the border resulted in such expulsions.

"The border is not open, and the vast majority of people are being returned under Title 42," CBP said in a statement, referencing the name of that section of law. The Department of Homeland Security said Pirro’s claim was false.

"There are few exceptions to this closure," including unaccompanied minors, added Erin Barbato, director of the Immigrant Justice Clinic at the University of Wisconsin Law School. "Jeanine Pirro’s claim that the border is open to anyone is absurd and reckless."

Asked for evidence, a Fox News spokesperson pointed to Pirro’s own comments March 22 on the program "The Five," when she said she had spoken to sheriffs from locations near the border. "I’m telling you for a fact, the border is open," Pirro said. "I stood there with a sheriff who showed me where they stopped the wall."

Pirro did not provide evidence for her original claim on that show either. She instead argued that due to Biden, "there is no border, there is no wall." However, Biden’s move to stop construction of Trump’s border wall did not include dismantling what was already built.

The border is not open to anyone from anywhere 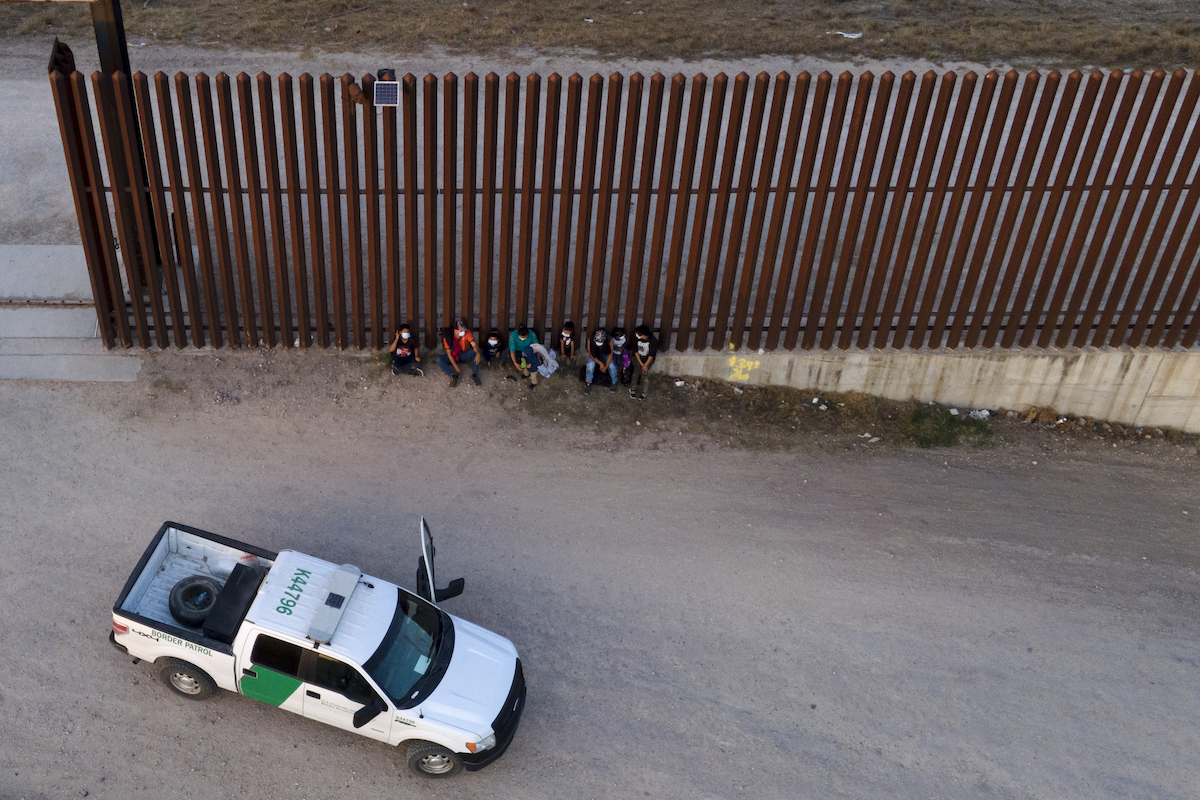 A U.S. Customs and Border Protection vehicle is seen next to migrants after they were detained and taken into custody, Sunday, March 21, 2021, in Abram-Perezville, Texas. (AP/Cortez)

The Biden administration is expelling most families and single adults encountered at the border using the same public health rule that Trump invoked during the pandemic, Homeland Security Secretary Alejandro Mayorkas said in a March 16 statement.

Viral image
stated on July 12, 2022 in a Facebook post
Photo shows a woman who is wanted for impersonating a nurse and kidnapping an infant from a local U.S. hospital.

Roughly 90% of single adult encounters that the Border Patrol recorded between ports of entry resulted in such expulsions, for example, according to CBP data.

However, the administration is not expelling unaccompanied children, who were previously being expelled under the Trump administration until a federal judge halted the practice in November. An appeals court in January said that the government could resume the practice, but the Biden administration has not. Their arrivals have contributed to the current influx at the border. Unaccompanied minors are allowed to request asylum under U.S. law, Barbato noted.

In cases where Mexico cannot receive migrant families sent immediately back from the U.S., border officials are sending those families into immigration proceedings, putting a strain on some regions of the U.S., Mayorkas said in his March 16 statement.

But Mayorkas has repeatedly said — including during a March 17 congressional hearing and a March 21 interview with ABC News — that the border is not open.

Before the pandemic, many migrants who arrived without a visa were swiftly deported in what are known as expedited removal proceedings, Hallett said. Only those who credibly claimed fear of persecution were cleared to stay in the U.S. while they pursued their asylum claims.

"Now, even fewer people are being allowed to enter the U.S. because Border Patrol is using a CDC regulation to expel almost everyone, even people who claim fear," Hallett said of the use of the public health-related authority. "Pirro’s statement has no basis in fact."

The Biden administration has started gradually letting in asylum seekers who were waiting out their cases from Mexico under Trump’s Remain in Mexico program, but the Border Patrol has continued apprehending some migrants caught trying to enter the U.S. unlawfully between ports of entry. CBP recorded 26,791 apprehensions in February.

Migrants apprehended at the border are screened for health and security issues, PolitiFact has reported. Mayorkas told Congress March 17 that known and suspected terrorists, for example, are denied entry based on intelligence and vetting procedures.

"Individuals who pose a public safety threat will not remain in the United States," he added.

There were also 1,537 cases in February in which migrants sought to enter the U.S. through legal ports of entry but were deemed inadmissible, according to CBP data.

There are many reasons why people seeking legal entry may be declared inadmissible, Hallett said. They could, for example, have criminal histories or suspected ties to terrorism, certain infectious diseases, or a previous deportation on record.

"These grounds of inadmissibility were in effect before the pandemic," Hallet said. "Now, it is even more difficult to gain admission to the U.S. because of the public health-related restrictions. The idea that the U.S. is letting in criminals and terrorists at the border is just false."

Pirro said the southern U.S. border "is now open to anyone from anywhere in the world who wishes to enter our country."

That’s wrong. Large numbers of migrants are attempting to cross the border, but it is not open to anyone who wants to enter the U.S., regardless of their background. Most of the encounters that CBP recorded at the border in February resulted in quick expulsions under the same public health-related authority that was invoked under the Trump administration.

PolitiFact, "Did the increase of children arriving at the border start under Trump or Biden?" March 17, 2021

Statement from the U.S. Department of Homeland Security, March 22, 2021

Email interview with Nicole Hallett, associate clinical professor of law and director of the immigrants’ rights clinic at the University of Chicago Law School, March 22, 2021

Email interview with Erin Barbato, director of the Immigrant Justice Clinic at the University of Wisconsin Law School, March 23, 2021