Instagram posts
stated on July 28, 2021 in Instagram and Facebook posts:
Says D.C. police officer Michael Fanone is the same person who was arrested after carrying a Confederate flag through the U.S. Capitol on Jan. 6.

As he defended the U.S. Capitol on Jan. 6, D.C. Metropolitan Police Officer Michael Fanone was beaten and tased, he testified before a House select committee.

Fanone, 40, described being dragged into the crowd, stripped of his badge, and threatened with chants to "kill him with his own gun." He said he fell unconscious, suffered a heart attack, and was later diagnosed with a concussion, a brain injury and post-traumatic stress disorder.

Now, some social media users are falsely claiming that Fanone played a much different role during the insurrection — not as an officer guarding the Capitol, but as a rioter who stormed it.

Their posts on various platforms were flagged as part of Facebook’s efforts to combat false news and misinformation on its News Feed. (Read more about our partnership with Facebook.)

The posts shared July 28 on Facebook and Instagram place two photographs side by side, with text overlaid above them suggesting that they’re the same person. 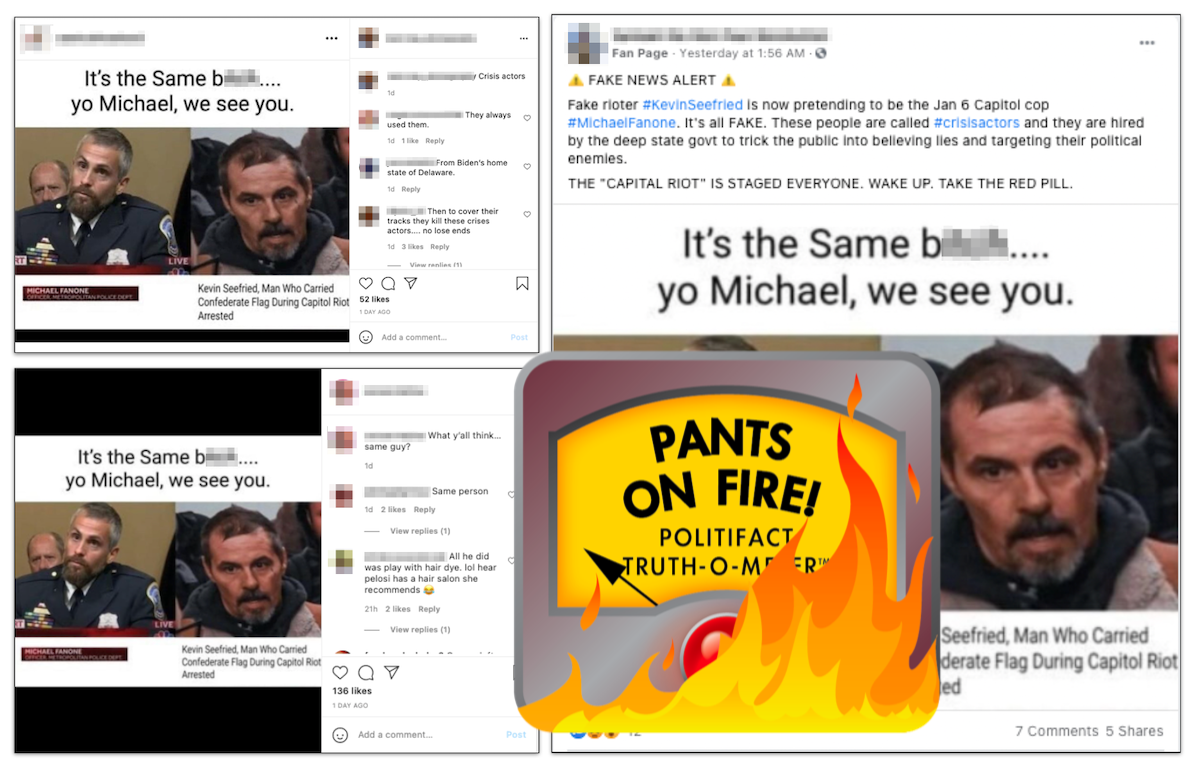 The captions published alongside the posts make similarly false claims, or suggest that one person is a "crisis actor" who was pretending to be the other as part of a "deep state" scheme.

But the two men in the photographs are not the same person, and one wasn’t pretending to be the other.

One photograph in the posts shows Fanone, the D.C. police officer, during his July 27 testimony before Congress. The other shows Kevin Seefried of Delaware, who was indicted on five charges after entering the Capitol with his son, Hunter Seefried, who was also indicted.

"That is not Officer Fanone," said Sean Hickman, spokesperson for the Metropolitan Police Department in Washington, D.C., when asked about the second photograph showing Seefried.

Further proof that they are not the same includes their actions and outfits on Jan. 6.

Fanone was dragged into the crowd by rioters on the Capitol grounds that afternoon, the video footage from his body camera shows. The House select committee investigating the insurrection played the footage during his testimony, as Fanone talked about it. Fanone described to lawmakers his whereabouts throughout the day. He said he arrived at the Capitol around 3 p.m.

But around the same time on Jan. 6, Seefried was inside the Capitol. According to court filings, Seefried confirmed in a voluntary interview with the FBI that he had entered the Senate building through a broken window at approximately 2:13 p.m., and that he had brought a Confederate flag to Washington from his home in Delaware, where he usually displays it outside.

And while the photograph of Seefried in the social media posts shows him wearing a sweatshirt and a coat, Fanone was in "full uniform" at the Capitol, he testified. Court documents in the case against another man who allegedly assaulted Fanone confirm that he was dressed that way.

We rate the posts Pants on Fire!