Tucker Carlson
stated on July 14, 2021 in a TV segment:
“It now appears there actually was meaningful voter fraud in Fulton County, Georgia, last November. That is not a conspiracy theory. It's true.”

A worker at the Fulton County Board of Registration and Elections works to process absentee ballots at the State Farm Arena, Nov. 2, 2020, in Atlanta. (AP)

Fox News host Tucker Carlson promoted a number of false, misleading and unsubstantiated claims about election fraud in Georgia in a recent segment on his cable news program.

"It now appears there actually was meaningful voter fraud in Fulton County, Georgia, last November," Carlson said July 14. "That is not a conspiracy theory. It's true."

Carlson told his viewers he was giving them the "fact-based," "official version" of what happened in Georgia, where Joe Biden defeated Donald Trump by more than 11,000 votes in a contest the state’s Republican election officials affirmed was free and fair.

But Carlson’s account of what happened in Fulton County — a Democratic stronghold that includes Atlanta — was neither official nor true. State and local officials and election experts said his claim of fraud reflected a misunderstanding of election procedures.

"Nothing that he brought up points to any voter fraud," Richard Barron, Fulton County’s elections director, told PolitiFact.

Viral clips from the segment online were flagged as part of Facebook’s efforts to combat false news and misinformation on its News Feed. (Read more about our partnership with Facebook.)

In the past, Fox News has argued in court that Carlson’s show should not always be viewed as strictly factual, and that his viewers expect him to stray from the truth. Asked about the July 14 segment, a Fox News spokesperson pointed as evidence not to any official record or finding, but to a July 13 press release from VoterGA, a group Carlson cited during his segment.

The group, led by Garland Favorito, is leading a search for evidence of fraud with a lawsuit seeking access to Fulton County’s absentee ballots. A critic of Georgia’s elections, Favorito has promoted conspiracy theories about 9/11, John F. Kennedy and other topics. 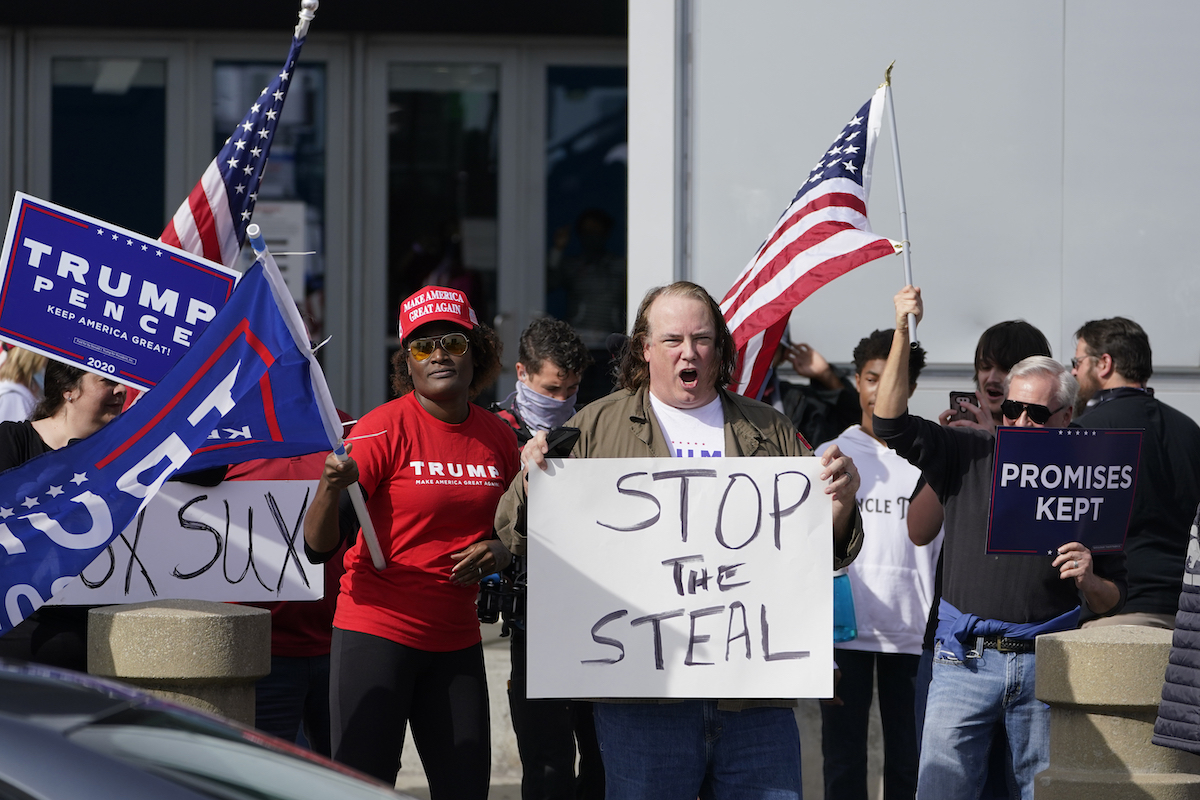 Here’s the truth behind the main claims Carlson made on air.

Carlson opened his segment with a dramatic — and misleading — story about an alarm that went off at a warehouse housing ballots in Fulton County this year:

"On a Saturday night in late May of this year, an alarm sounded in a big, nondescript warehouse in Fulton County, Georgia. The warehouse was an unlikely place for a burglary … But someone tried to do it anyway, and at just the perfect moment, 20 minutes after deputies in charge of guarding the warehouse left their post. By the time those deputies returned to check out the alarm, someone had opened the hundred-pound door to the warehouse. So what happened that night? And why? We still don’t know."

We do know. In fact, a photograph Carlson aired on screen came from a Georgia Public Broadcasting report that explained what happened. 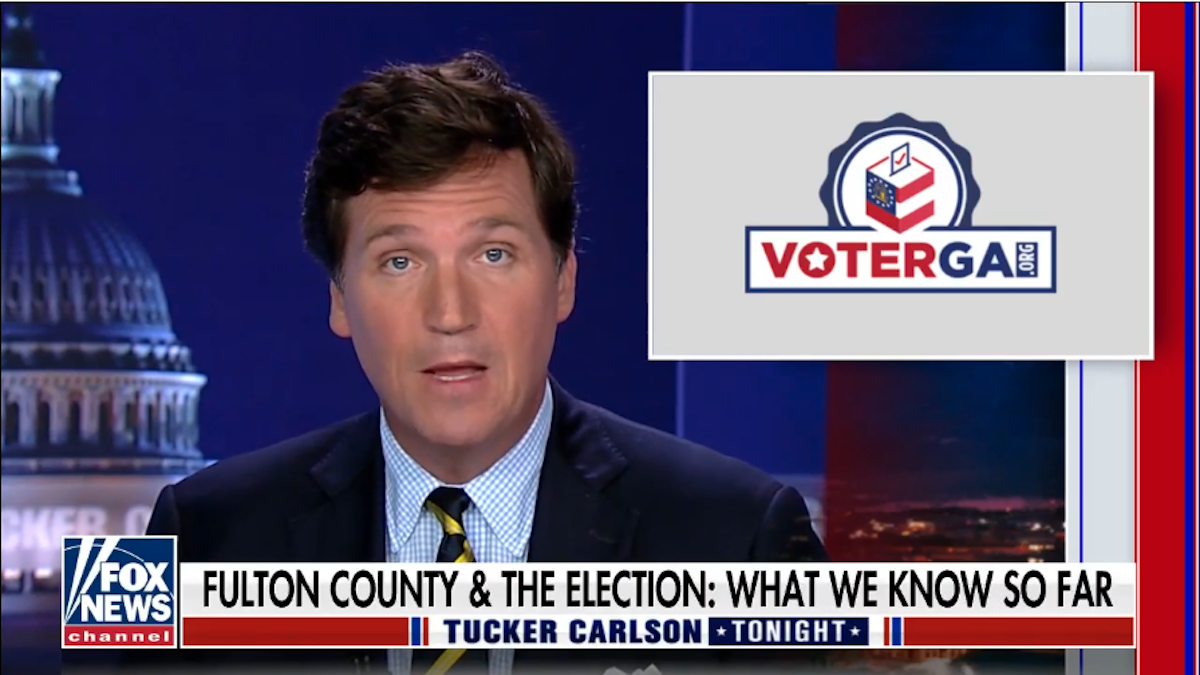 A screenshot of a "Tucker Carlson Tonight" segment about alleged voter fraud in Fulton County, Georgia, as seen on July 14, 2021.

The alarm that rang did not come from the part of the building housing ballots, reporter Stephen Fowler wrote in June. And the door was opened by off-duty police officers.

The kicker: The officers who opened it had been hired as private security by an attorney representing several plaintiffs in the lawsuit seeking access to Fulton County’s ballots — the very people seeking to prove Georgia’s election was marred by fraud.

Barron, the elections director, said the alarm was tied to a motion detector in an office belonging to the clerk of the superior court, likely triggered by a rodent.

When it sounded, the Fulton County Sheriff’s deputies watching the building were changing shifts, he said. That left an opening for the litigants’ hired security to approach the building.

Barron said that the county clerk had accidentally left a door unlocked, and that those officers had "illegally trespassed" when they opened it and entered. He said they "staged photos to make it look as though the door was wide open."

The ballots inside remained secured.

Carlson’s second allegation: that Fulton County counted thousands of ballots more than once.

Carlson said VoterGA identified more than 4,000 votes that were duplicates in Fulton County. He also cited an Atlanta Journal-Constitution report about potential double-scanned ballots in the initial count.

"The final tally from the double counts we know about amounts to more than 3,300 votes for Joe Biden and 865 votes for Donald Trump," Carlson said. He added: "We're talking about a lot of ballots, at least hundreds of ballots involved, enough potentially to affect the outcome of the election."

Election workers do sometimes make errors, and Fulton County has had a history of messy elections, said Charles S. Bullock III, a professor of political science at the University of Georgia. But a similar claim that over 4,000 of the county’s ballots were scanned multiple times was rated False by PolitiFact.

"There is no evidence that thousands of ballots were counted twice," said Amber McReynolds, chief executive officer of the National Vote at Home Institute.

The Atlanta Journal-Constitution reported that the county may have scanned nearly 200 ballots twice before the state’s recounts. But the newspaper added that "there’s no indication any vote for president was counted more than once in official results."

"The chance that you are going to double scan the same batch again is, like you might as well win the lottery," Barron said. "I think the odds are worse." 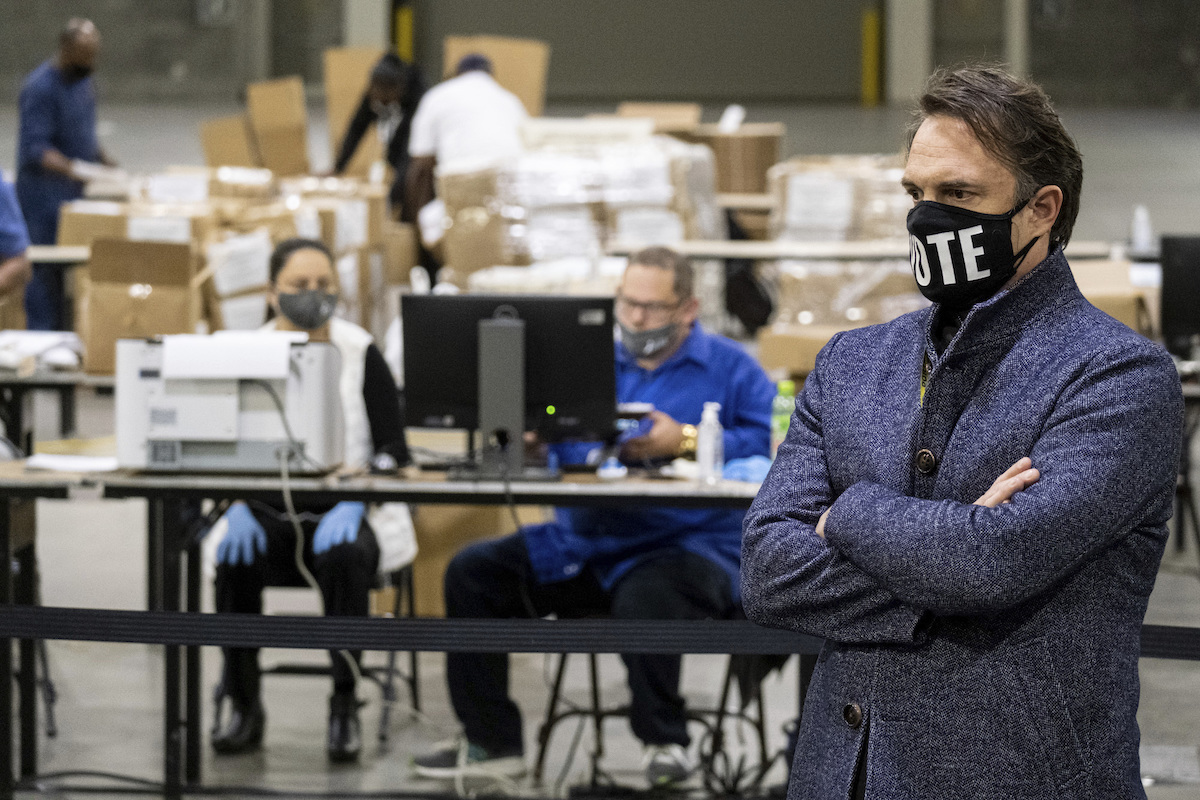 On screen, Carlson showed a video of an election worker feeding ballots through a machine and said it "appears to show large numbers of ballots being scanned multiple times."

But it’s typical for election workers to have to cancel and rescan some batches of ballots, experts said. The practice is not fraudulent double-counting. It’s what election workers in Fulton County and elsewhere are instructed to do when machines jam up or fail to scan a ballot.

Investigators looked into allegations of fraud in Fulton County and found nothing, the Georgia secretary of state’s office told PolitiFact. The recounts corrected some mistakes that had no bearing on the outcome, including in two counties that went for Trump.

"There’s never been an election held in Georgia which has been checked so many different ways," said Bullock.

Carlson claimed that VoterGA had found "falsified" audit tally sheets with "fabricated vote totals," including sheets that logged hundreds of votes for Biden and zero for other candidates.

"It certainly sounds like flat-out criminal fraud," he said.

The source for the claim, again, was VoterGA’s July 13 press release. PolitiFact reached out to the group for more details and did not hear back in time for publication.

But the hand audit in which these tally sheets were used did not produce Georgia’s final, certified results, Barron said. The state’s machine recount did, and it confirmed Biden’s victory.

As for the sheets VoterGA said only tallied votes for Biden, Barron said they were likely the result of election workers sorting ballots by candidate during the audit.

"They would put these into piles, and then on the tally sheet, they would mark the number of votes cast according to the count of each of those piles," Barron said.

A photo from the audit shows an election worker doing just that, as USA Today reported. The outlet also reported that there were similar batches from the audit with all votes tallied for Trump. "Since they did use the sorting method during the recount, it is possible for a batch to look like that," McReynolds told PolitiFact. 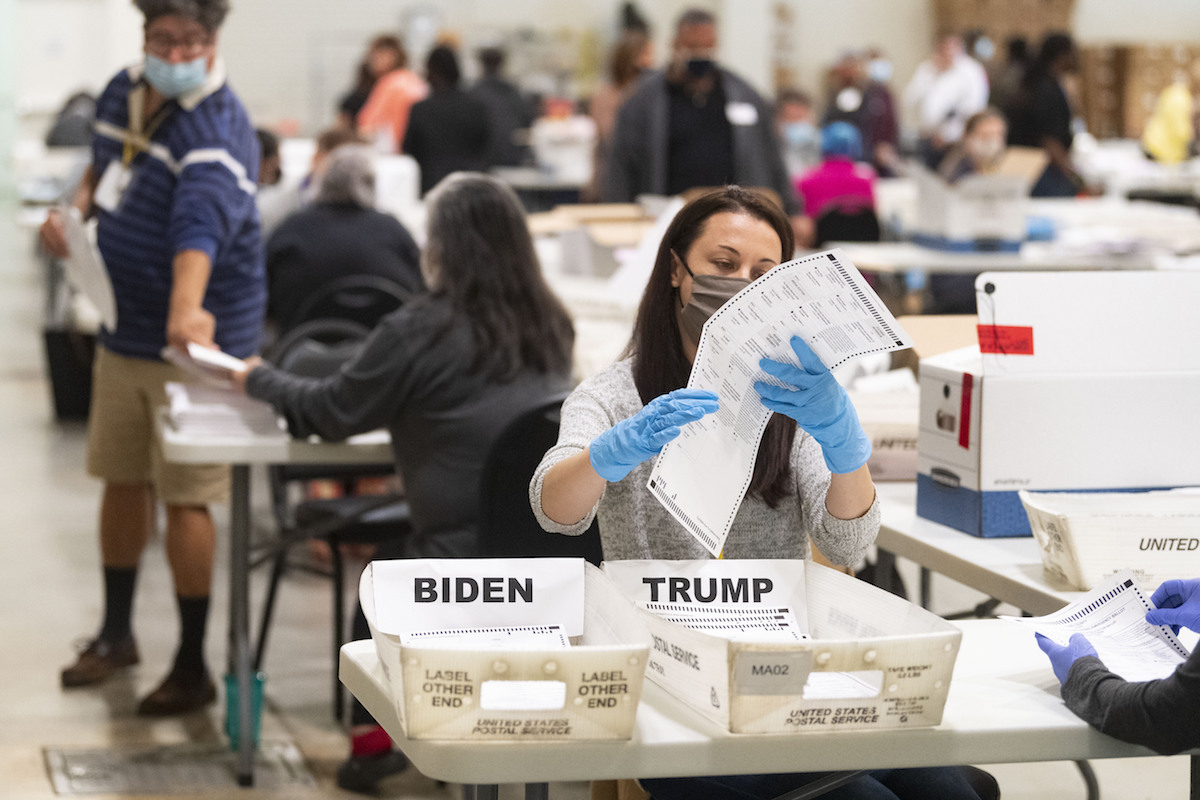 An election worker looks at a ballot during Georgia's hand recount of presidential votes on Nov. 15, 2020, in Marietta, Ga. (AP)

Carlson said a "whistleblower" had captured photos of mail-in ballots without creases.

"That's strange because of course mail-in ballots need to be bent in order to be mailed in," he said as the images ran on screen. "These ballots clearly had never been inside an envelope."

But many military and overseas voters receive electronic ballots that they print, fill out and return by mail, Gabriel Sterling, Georgia’s voting system implementation manager, told the New York Times in January. These ballots are not the right size for scanners, so election workers under supervision transfer those votes onto normal ballots so the scanners can read them.

The same process occurs for ballots that get torn in the scanner, sliced when opening the envelope, or too wrinkled and bent in the mail. During the 2020 election, the process was also standard procedure in Georgia’s Republican counties, CNN’s Daniel Dale reported.

"It is absolutely not proof of fraud," McReynolds said. 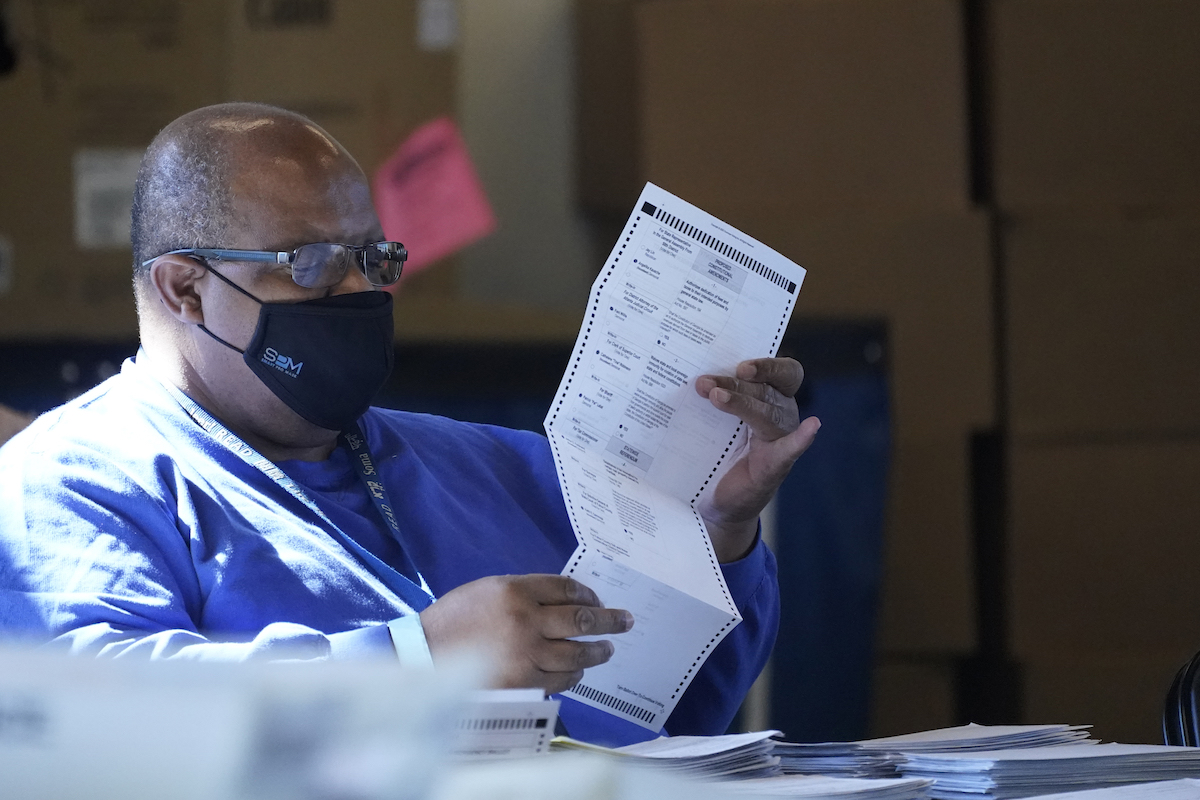 "Nearly 35,000 Georgia voters moved out of their county of residence more than a month prior to Election Day," Carlson said. "They were ineligible to vote. And yet they did."

The source for Carlson’s claim was an article from the Federalist, a conservative website. The article said the figure came from an expert who compared the U.S. Postal Service’s national change-of-address database with data from Georgia’s secretary of state.

The secretary of state’s office told PolitiFact it disputed the claim. And an address change for the purpose of receiving mail is not itself proof of a change in residency that would affect voting.

Some college students might continue to vote from their home address while they go to school, Bullock said. Military members stationed at one of Georgia’s many bases could do the same.

The Federalist’s article acknowledged what Carlson did not — that those people "may have been students, members of the military, or may have only relocated temporarily."

Carlson said, "It now appears there actually was meaningful voter fraud in Fulton County, Georgia last November. That is not a conspiracy theory. It's true."

To back his claim, the Fox News host rattled off several claims purporting to show signs of fraud. Each was inaccurate, misleading or unsubstantiated, PolitiFact found.

Biden’s victory in Georgia was confirmed by two recounts.

The Washington Post, "Here is the latest baseless voter fraud allegation, brought to you by Trump and Tucker Carlson," July 15, 2021

The Atlanta Journal-Constitution, "Some ballots initially double-counted in Fulton before recount," July 13, 2021