Kevin McCarthy
stated on February 9, 2021 in a press release:
Raising the national minimum wage to $15 per hour “would destroy up to 3.7 million jobs.”

Would raising the federal minimum wage to $15 per hour "destroy up to 3.7 million jobs" in the United States?

That’s what GOP House Minority Leader and California Rep. Kevin McCarthy claimed in the headline of a press release on Tuesday as Democrats in Congress began debating the move. On Twitter the same day, McCarthy wrote the wage hike "could put nearly 4 million Americans out of work." 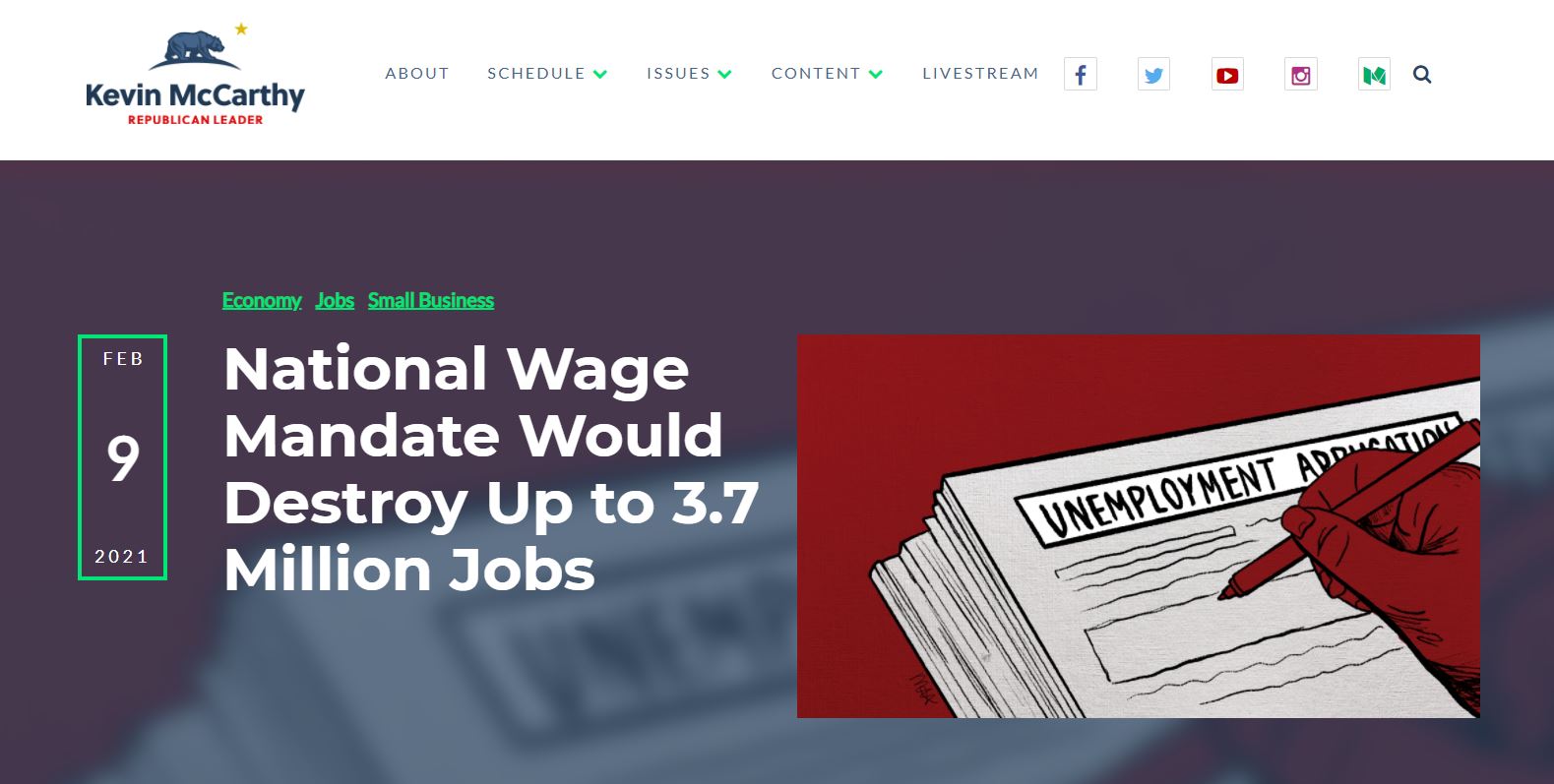 This is a screen shot of the headline from McCarthy’s press release.

The Biden Administration last month proposed raising the federal minimum hourly pay from $7.25 to $15, with increases of about $1.50 every year for five years.

To make that happen, Congressional Democrats introduced the Raise the Wage Act of 2021 last month and began considering the legislation in the House Committee on Education and Labor this week.

Here’s what McCarthy said in the body of the press release:

"At this critical point, the Democrats’ big, creative response is to raise the federal national wage to $15 an hour — a move the nonpartisan Congressional Budget Office previously found could cost nearly 4 million workers their jobs."

President Joe Biden initially included the proposal to raise the minimum wage to $15 per hour in his $1.9 trillion COVID-19 relief bill. But he predicted last week it would be left out due to opposition from Republicans and centrist Democrats.

Given the debate over raising the wage and its impact on jobs, we decided to take a closer look at McCarthy’s claim in this fact check.

In his press release and tweet, McCarthy linked to an analysis of the wage proposal by the Congressional Budget Office published on Monday.

The CBO, a nonpartisan research service, predicted the wage hike would eliminate jobs, but would also raise wages for an estimated 17 million people and lift 900,000 people out of poverty. It doesn’t say anything about destroying an estimated "3.7 million" positions as McCarthy claimed. Instead, the CBO said "the average estimate is that employment would be reduced by 1.4 million workers."

The report goes on to say there’s a "one-third chance" the loss will be between 1 million and 2.7 million workers, still far less than McCarthy’s number.

"Young, less educated people would account for a disproportionate share of those reductions in employment," the report adds.

A spokesperson for McCarthy did not respond to questions.

Deborah Kilroe, a spokesperson for the CBO, said McCarthy likely got his figure from a July 2019 CBO report that also examined raising the minimum wage to $15 per hour.

That older analysis predicted the "median estimate" for job losses would be 1.3 million. Meanwhile, it said "there is a two thirds chance that the change in employment would be between about zero and a decrease of 3.7 million workers."

That last figure lines up with McCarthy’s statement of "nearly 4 million workers," but it comes from the high-end of an old report and ignores what the CBO published this week.

Last month, FactCheck.org found Kentucky Republican Sen. Rand Paul also distorted the facts on this topic. The senator told Fox News that "the government estimates are close to 4 million people will lose their jobs," if the minimum wage hike goes through.

FactCheck.org examined the July 2019 CBO report [the current report had yet to be published] and found Paul cherry-picked the high-end of that report.

McCarthy appears to be citing a Congressional Budget Office analysis from 2019 that said, at the high-end, 3.7 million jobs could be lost from the wage hike.

But in his statement, he linked to the CBO’s new analysis published this week which found an average estimate of 1.4 million jobs would be lost, a figure he omitted.

The new CBO report added there’s a "one-third chance" the loss will be between 1 million and 2.7 million workers, still far less than McCarthy’s claim.

In the end, we found McCarthy cherry-picked a figure from an old report while ignoring current data on the topic that tells a different story.

We rated his claim False.

Congressional Budget Office, The Budgetary Effects of the Raise the Wage Act of 2021, February 2021.