The clip shows Los Angeles County election workers legally collecting ballots from an authorized drop box on Nov. 4, the day after Election Day, which county election officials said was standard procedure. They noted all drop boxes were closed and locked at 8 p.m. on Election night.

PolitiFact last week debunked a headline attached to the same video, which went viral on TikTok. The headline said the clip showed evidence of election "cheating," in California.

When Trump shared the video today, he suggested there was wrongdoing by adding: "You are looking at BALLOTS! Is this what our Country has come to?" 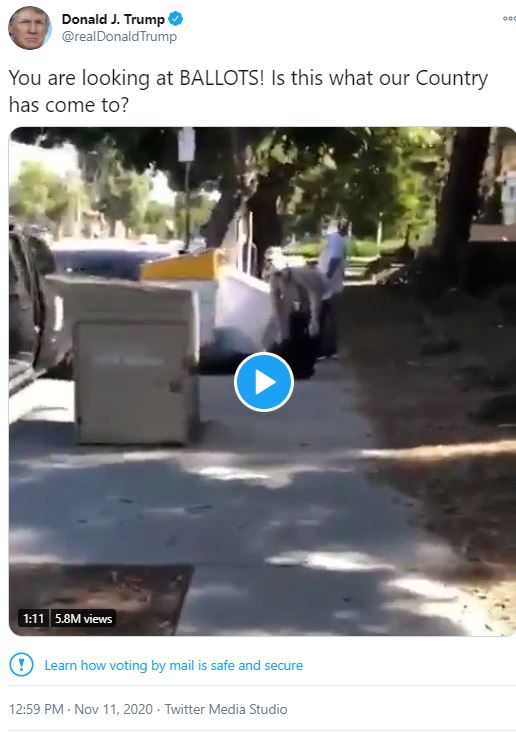 Here’s PolitiFact’s analysis from its recent fact check. We’ll offer a rating on Trump’s sharing of the video at the end.

A TikTok video on Nov. 4, the day after Election Day, suggested there was "cheating" for Joe Biden in California because some ballots weren’t collected until he had already been declared the winner in that state over President Donald Trump on Election Night.

The viral video was headlined: "This video was just taken (11/04) by a friend in California. The cheating is unreal!!!"

California did collect ballots on Nov. 4. But it was standard procedure, not any sign of cheating, to collect and then process ballots from drop boxes on that day.

Notably, California accepts mail-in ballots up to 17 days after Election Day, as long as they are postmarked by Nov. 3.

As shared on TikTok, the minute-long video shows two men loading hundreds of paper items from a box into satchels. The box is on a sidewalk on what appears to be a residential street. It’s not apparent where or when the video was recorded.

Viral image
stated on November 13, 2022 in an Instagram post
Ballots recovered from a Santa Clara County, California, ravine are evidence of “how the left cheats to win.”

The woman then asks the men if they are "official election guys," and one of them shows her a badge clipped to his shirt. What’s on the badge is not visible. There’s a sign on the box they’re collecting from, but what it says is not visible, either.

The day after the posting, the office of the Los Angeles County Registrar-Recorder/County Clerk responded to a posting of the video on Twitter, saying:

"All Drop Boxes were closed and locked at 8 p.m. on Election Night and ballots were collected the following day. These are valid ballots that will be processed and counted during the post-election canvass — like all outstanding vote-by-mail ballots."

A spokeswoman for the California Secretary of State told PolitiFact the video showed ballot collection in Reseda.

The Associated Press and other media called California for Biden just after California polls closed Nov. 3. The AP said it declared Biden the winner of California as soon as polls closed in the state "after results from AP VoteCast and an analysis of early voting statistics confirmed expectations that the state’s longstanding political trend in favor of Democratic presidential candidates will hold."

A poster on TikTok claiming, "The cheating is unreal," shared a video widely circulated on social media that appeared to show California ballots being collected the day after the election, after the state was called for Biden.

In fact, it’s standard procedure in California to collect and process ballots from drop boxes after Election Day. A county official said the boxes were locked at 8 p.m. on election night. The video did not depict any cheating.

President Trump shared the same debunked video this week, suggesting it was evidence of election fraud in California.

We rated that claim False.