Tweets
stated on December 16, 2021 in a tweet:
“Boy passes Joe Biden a vial of fresh blood to drink on his way back to the White House”

President Joe Biden is greeted by Kentucky Gov. Andy Beshear, his wife Britainy Beshear, and their children Lila and Will Beshear, as he arrives at Cincinnati/Northern Kentucky International Airport in Hebron, Ky., on July 21, 2021. (AP)

Social media users circulated a fake, doctored video that purported to show a child discreetly handing a vial of blood off to President Joe Biden.

"Boy passes Joe Biden a vial of fresh blood to drink on his way back to the White House," said a Dec. 16 tweet from a Twitter account that has since been suspended.

The Biden-drinks-blood claim was repeated — and the video reposted — on Instagram. There, it collected thousands of views, and it was flagged as part of Facebook’s efforts to combat false news and misinformation on its News Feed. (Read more about our partnership with Facebook.)

But the claim is false, and the video it’s based on is edited to include the vial of blood. 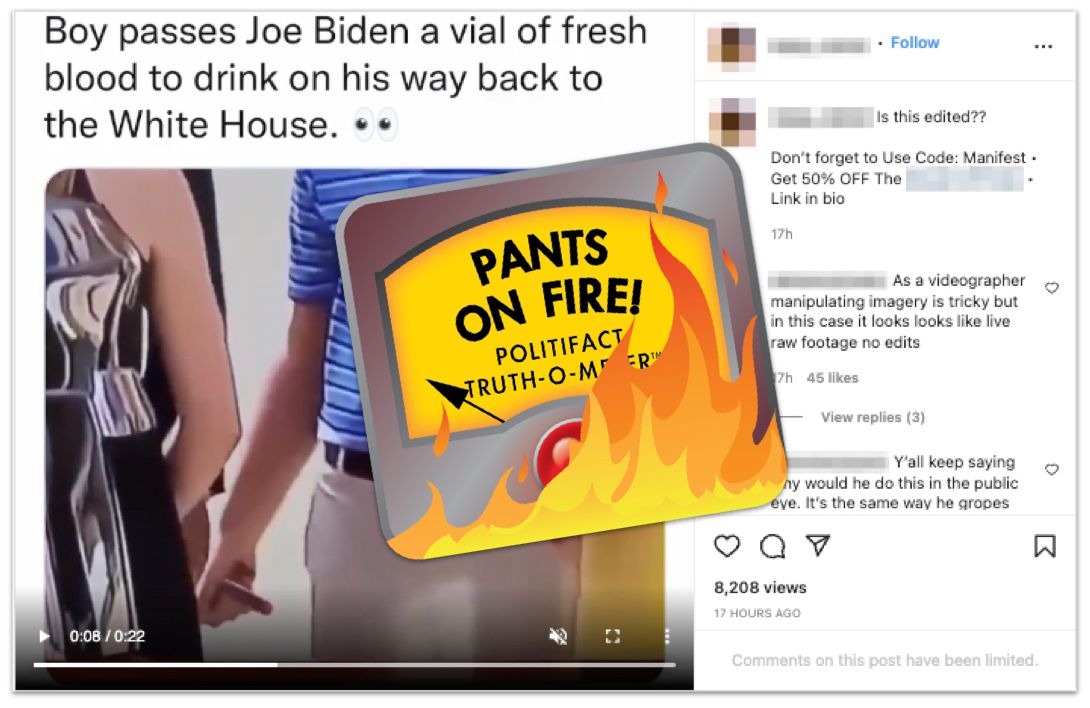 Viral image
stated on April 25, 2022 in a Facebook post
“The same system that kept you in the dark about Ghislaine Maxwell…doesn’t mind live-streaming Johnny Depp’s trial.”

The original video, unedited and without the ominous soundtrack featured in the social media version, was captured live on July 21 by a local Fox-affiliate TV station serving the Cincinnati area, Snopes reported. The video shows Biden meeting with Kentucky Gov. Andy Beshear and his family after landing at an airport near the Kentucky-Ohio border.

Around the 12:30 mark, the Fox19 video shows Biden slipping an unknown object to the young boy standing beside him, Beshear’s son Will, who then placed the object in his pocket. It doesn’t show a vial of blood, nor does it show Biden receiving anything from Beshear’s son in return.

The claim about Biden harvesting blood to drink plays into a segment of the QAnon conspiracy theory, which holds that the world is run by a cabal of Satan-worshipping pedophiles, including many high-profile Democrats. Some QAnon adherents believe members of this ring molest, kill and eat children to ingest a life-extending chemical in human blood, PolitiFact reported.

Those beliefs are without evidence, and so is this claim.

We rate it Pants on Fire!

WLKY, "What did President Biden and Gov. Beshear talk about at the airport in Northern Kentucky?" July 23, 2021

PolitiFact, "What is QAnon, the baseless conspiracy spilling into US politics?" Aug. 17, 2020