Facebook posts
stated on April 24, 2021 in a Facebook post:
“Anyone remember Kamala telling Joe during the debate: ‘You will do whatever the Chinese tell you! They gave your son over a billion dollars.’”

More than a year before Joe Biden selected Kamala Harris to be his running mate, the future president and vice president sparred on the debate stage in Miami.

In a tense exchange, Harris attacked Biden over his record on busing to desegregate schools in the 1970s. "There was a little girl in California who was part of the second class to integrate her public schools, and she was bused to school every day," she said. "And that little girl was me."

Now, months into Biden’s term as president with Harris by his side, social media users have recast the exchange as a confrontation over Biden’s relationship with China.

"Anyone remember Kamala telling Joe during the debate: ‘You will do whatever the Chinese tell you! They gave your son over a billion dollars,’" says an April 24 Facebook post. The post shows images of both Harris and Biden from the June 27, 2019, primary debate in Miami. 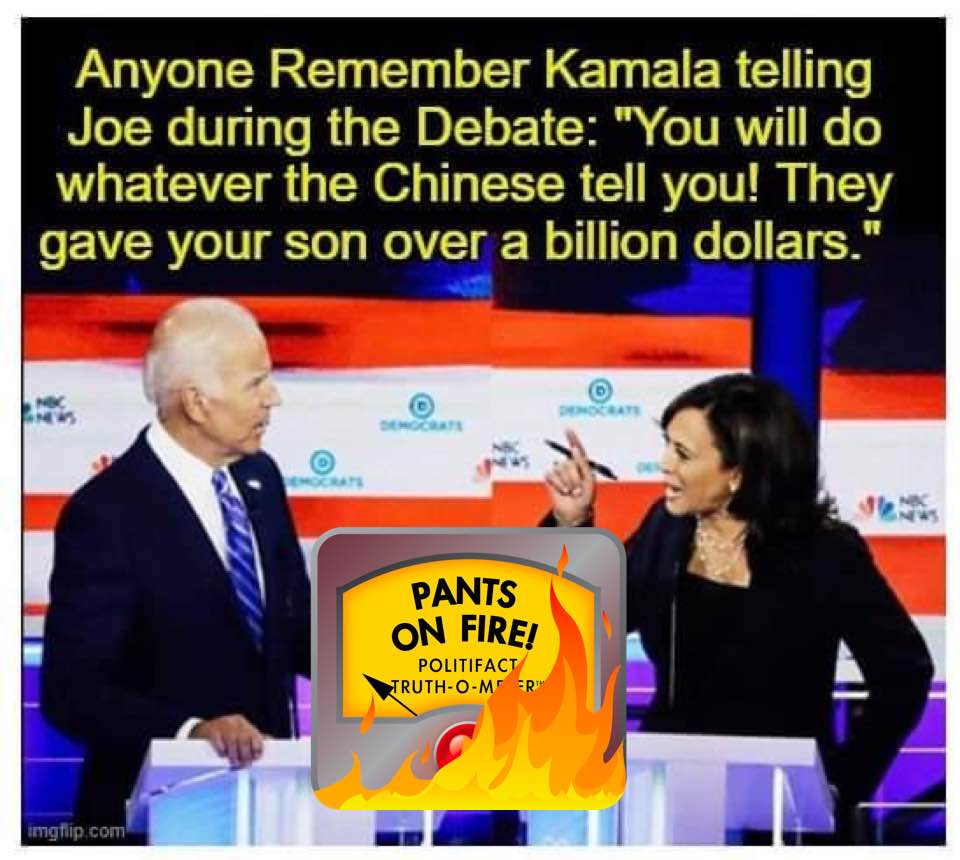 A screenshot of an April 24 Facebook post falsely claiming Kamala Harris attacked Joe Biden on China during a debate.

Harris called off her campaign for president on Dec. 3, 2019. Before that, she participated in five Democratic primary debates, including the first in Miami. But transcripts of each debate from the Washington Post do not show Harris attacking Biden about China.

Harris did mention China during a September debate in Houston, but the comment did not pertain to Biden or Biden’s son, Hunter Biden.

Hunter Biden became a target of attacks from former President Donald Trump and his allies as Trump and Biden squared off on the campaign trail. Trump’s efforts to pressure Ukraine to announce investigations into the Bidens led to the first of his two impeachments.

In December, Hunter Biden confirmed his finances were the subject of a Justice Department probe. He has been involved in business dealings involving Chinese companies. But claims alleging wrongdoing by the elder Biden have generally remained unsubstantiated.

A Facebook post said, "Anyone Remember Kamala telling Joe during the Debate: ‘You will do whatever the Chinese tell you! They gave your son over a billion dollars.’"

Harris never said that during the Miami primary debate highlighted by the Facebook post, or in any of the other four primary debates she participated in, transcripts show.

RELATED: Harris did not call Biden a racist during her busing attack

USA Today, "Fact check: Kamala Harris didn't say Joe Biden would 'do whatever the Chinese tell you' at debate," April 29, 2021

Lead Stories, "Fact Check: Kamala Harris Did NOT Say, 'You Will Do Whatever The Chinese Tell You' To Joe Biden During Debate," April 29, 2021

Snopes, "Did Kamala Harris Tell Biden ‘You Will Do Whatever the Chinese Tell You’ During Dem Debate?" April 29, 2021

PolitiFact, "Hunter Biden and China: Sorting through a murky business deal," May 22, 2020

PolitiFact, "Donald Trump's accusations about Hunter Biden and a payout from China: A closer look," Oct. 2, 2019

PolitiFact, "Fact-checking the 2nd night of the Democratic debate in Miami," June 27, 2019