Facebook posts
stated on January 8, 2020 in a Facebook post:
"The missiles that were launched at American forces in Iraq from Iran, were funded by Barack Obama, with American tax dollars."

The Iranian missile strikes launched against U.S. forces in Iraq inspired the spread of false and inaccurate claims on Facebook, with one post taking aim at former President Barack Obama.

"The missiles that were launched at American forces in Iraq from Iran, were funded by Barack Obama, with American tax dollars. Let that sink in," said a Jan. 8 Facebook post from a page that calls itself "Conservative Headquarters." 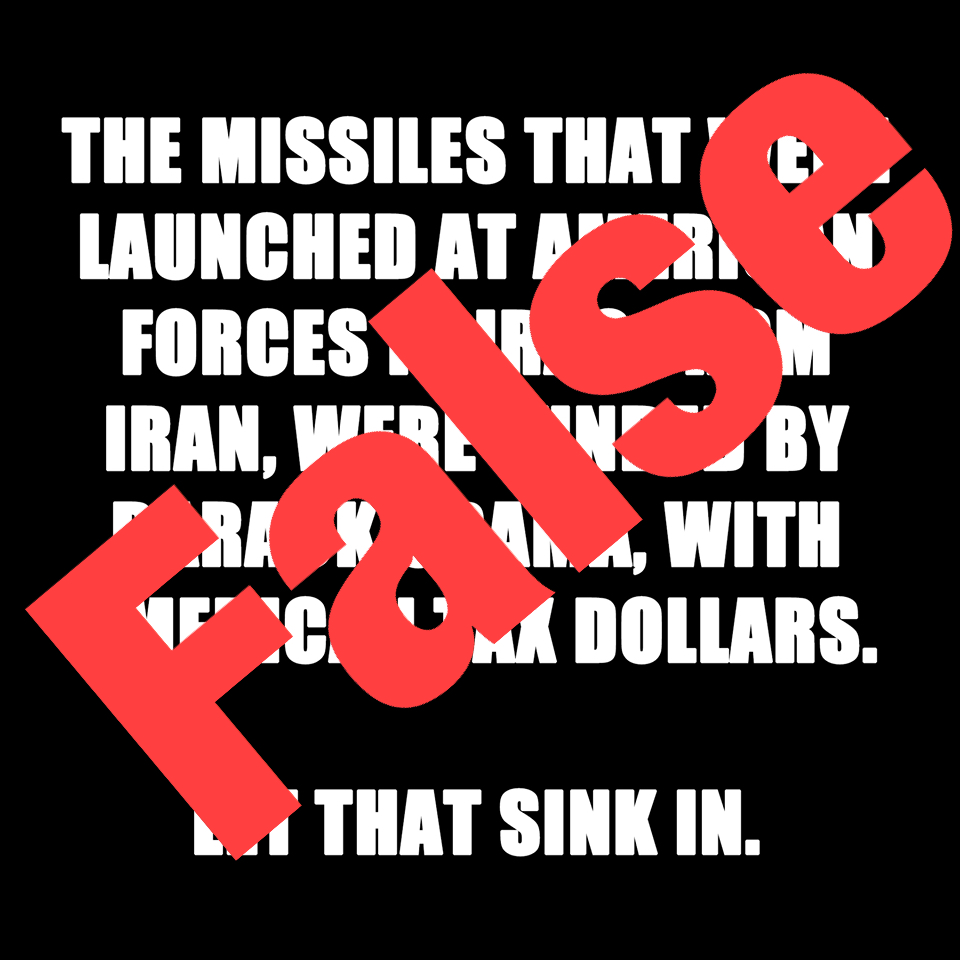 A text image posted to Facebook on Jan. 8, 2020 contains a claim that we rate False.

The post, with over 19,000 shares, was flagged as part of Facebook’s efforts to combat false news and misinformation on its News Feed. (Read more about our partnership with Facebook.)

It cites a 2016 article from the Washington Free Beacon, a conservative website. But the Free Beacon post – from nearly four years ago – doesn't allege what the Facebook image did. There is no evidence that the Iranian missiles were paid for by U.S. taxpayers.

The deal with Iran was promoted by Obama, but it was also signed by China, Russia, France, Germany, and the United Kingdom, with assistance from the European Union.

The deal allowed Iran to regain access to some of its own assets, which had been frozen as an economic sanction levied in retaliation for the country’s pursuit of a nuclear weapon. The United States and other countries lifted the sanctions and freeze on funds after international inspectors verified in 2016 that Iran was doing enough to curb its nuclear program.

So the money was Iran’s. It wasn’t handed to Iran by the United States or Obama, nor was it funded by U.S. taxpayers.

It’s not clear what ultimately happened to the funds. In January 2016, then-Secretary of State John Kerry said he expected that some of the money would end up with organizations involved in terrorism. But there’s no evidence that the money was behind the strike in Iraq.

On Jan. 5, after a U.S. airstrike killed top Iranian military leader Gen. Qassem Soleimani, Iran said it would no longer comply with the limits the deal placed on its ability to enrich uranium.

In addition to the unfreezing of assets, the United States did provide Iran $1.7 billion as part of a settlement ending a legal dispute.

That money was part of a cash transfer that the Congressional Research Service reviewed. It resolved an arms contract between the United States and Iran that predated the Iranian revolution in 1979. Iran had paid for military equipment, but it was never delivered.

As we’ve noted before, there was $400 million in that account as of 1990, and negotiators agreed that accrued interest would add $1.3 billion to the amount. The United States sent the money to Iran in euros, Swiss francs and other currencies.

But this was a repayment, meaning the United States was giving Iran its money back with interest. And while the interest came from a government fund maintained by taxpayer dollars, the money being reimbursed originated with Iran, not the U.S. taxpayer.

And again, there’s no evidence that this money ultimately went toward the recent missile strikes.

A Facebook post said, "The missiles that were launched at American forces in Iraq from Iran, were funded by Barack Obama, with American tax dollars."

The 2015 Iran nuclear deal was signed by multiple nations, and it did not involve the United States or Obama cutting a check to Iran. The funds Iran received were its own frozen assets. American tax dollars were never part of the deal.

A separate payment that went to Iran under Obama was to settle a decades-old dispute over U.S. military equipment that Iran paid for but never received.

Clarification and update, Jan. 10, 2020: The Washington Free Beacon story cited by the author of the viral image never alleged that taxpayer dollars were used to fund the missiles launched at American forces in Iraq. An original version of this story may have been unclear on this point.

PolitiFact, "Donald Trump miscasts the money and the terms in the Iran nuclear deal," Aug. 27, 2019