Donald Trump
stated on June 23, 2019 in an interview on "Meet the Press":
California "admitted" there were "a million" illegal votes in the 2016 presidential election.

In his recent interview on "Meet the Press", President Donald Trump claimed there’s proof to support his repeatedly debunked claim that "serious voter fraud" took place in California during the 2016 presidential election.

Trump alleged California "admitted" there were "a million" illegal votes in the 2016 presidential election.

Election officials and fact checkers have previously called out Trump’s baseless claims on the subject. In November 2016, PolitiFact National rated Pants on Fire his contention that he lost the popular vote because "millions of people voted illegally." PolitiFact California handed out the same rating for his claim of "serious voter fraud" in California.

Hillary Clinton won the state by more than 4 million votes and she won the national popular vote by about 2.8 million. Trump won the decisive Electoral College tally.

We wanted to know the veracity of Trump’s new claim. So, we examined the settlement that he said is evidence of massive voter fraud in California.

Here’s the exchange between Trump and Chuck Todd:

Todd: "You didn't like the fact that you lost the popular vote. That bothered you, didn't it?"

Trump: "Well, I think it was a -- I mean, I'll say something that, again, is controversial. There were a lot of votes cast that I don't believe. I look at California."

Todd: "A million votes of what?"

Trump: "Take a look at Judicial …

Todd: "What are you talking about?"

Trump: "Judicial Watch made a settlement. There was …"

Trump: "There was much illegal voting." 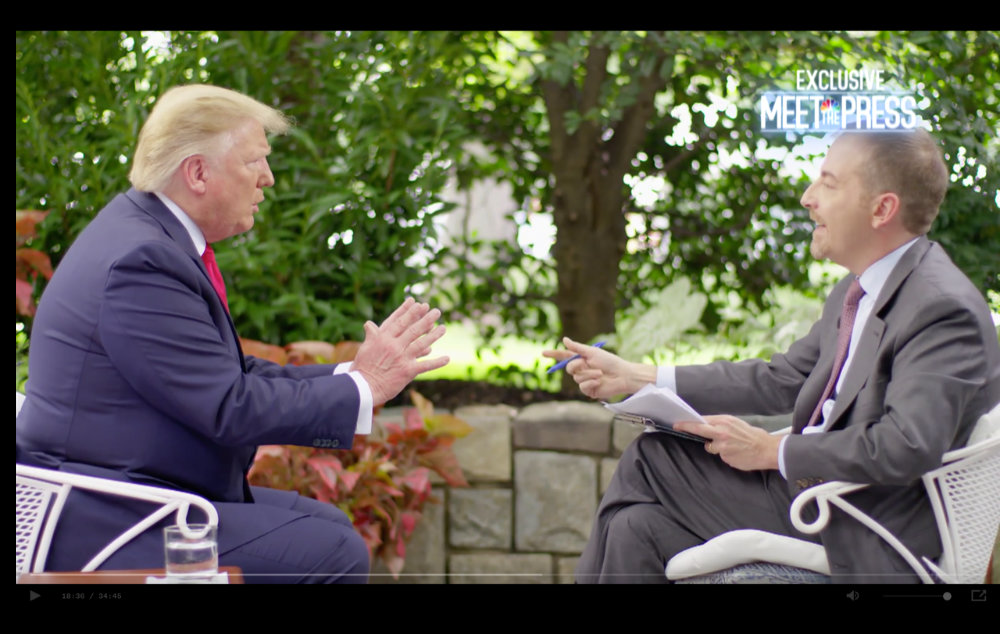 The 20-page settlement document, however, notes all parties agreed there was no admission of liability or wrongdoing by the state or county. It makes no mention of voter fraud or illegal voting.

In a written statement, California Secretary of State Alex Padilla blasted Trump’s new allegation. Padilla, a Democrat, has also been critical of the president’s past statements on voter fraud.

"No matter how much he repeats them, Trump's lies about voter fraud are patently untrue. Specifically, the settlement with Judicial Watch, Los Angeles County, and the Secretary of State contains absolutely no admission to or evidence of "illegal votes." The President’s claims are untrue and yet another distortion aimed at undermining confidence in our elections.

The settlement was clear and simple, California will continue its work to adhere to modern list maintenance procedures under the National Voter Registration Act.  California elections officials have and will continue to work to meet the goals of the National Voter Registration Act (NVRA): maintaining the accuracy of the voter rolls and increasing the number of eligible citizens who register and vote."

Dean Logan, Los Angeles County’s top elections official, added in an email: "The agreement is about voter registration record keeping and interpretation of federal law, not about votes cast in any election."

In a press release last week, Judicial Watch said Los Angeles County had "sent notices to as many as 1.59 million inactive voters on its voter rolls – a step toward removing the names of voters who have moved, died, or are otherwise ineligible to vote." Logan, the county elections official, confirmed the notices had been sent.

The Associated Press reported on the agreement in January, describing it as a settlement on "old voter records," not on illegal voting. In the article, Paul Mitchell of the nonpartisan research firm Political Data Inc. called the case insignificant because it involves inactive voters who "are not getting voting materials, they are not casting ballots, they are not showing up in precincts."

"What they are saying is L.A. county holds on to too many inactive registrations," he told the AP. "This whole thing does nothing to clean up the active voter file."

The White House did not respond to a request for information supporting the president’s claim. Judicial Watch also did not respond. The group’s president, Tom Fitton, has described the settlement on Twitter and in the AP article as an effort to "clean up" the state’s election rolls.

President Trump recently claimed California "admitted" there were "a million" illegal votes in the 2016 presidential election, in an effort to support his widely debunked claim of massive voter fraud in the state.

Trump cited a January settlement between the state and Judicial Watch.

But that agreement says nothing about voter fraud or illegal voting. Instead, it requires Los Angeles County election officials to begin the process of removing inactive registrations, for people who have gone years without voting often because they’ve moved or died, to comply with federal law.

It says all parties agreed there was no admission of liability or wrongdoing by the state or county.

We found Trump's new voter fraud claim as baseless as his past allegations.

We rate it Pants on Fire.