Joe Biden said not everyone who wants to can leave after a war. Military experts checked his history

President Joe Biden’s decision to follow through on a U.S. pledge to withdraw from Afghanistan led to a rush of people seeking to leave the country, including Afghan nationals who had worked with the U.S. military or non-governmental organizations.

"We’re going to continue to try to get you out," Biden said Aug. 26 following the Kabul airport terrorist attack. "It matters.’"

But with the Aug. 31 deadline for the U.S. withdrawal nearing, Biden proceeded to sound a note of caution:

"Look, I know of no conflict, as a student of history, no conflict where, when a war was ending, one side was able to guarantee that everyone that wanted to be extracted from that country would get out."

At a time when Biden’s administration was being criticized over the withdrawal from Afghanistan after almost 20 years of war, his comment struck some as self-serving.

But is it accurate?

Military historians we contacted agreed with Biden in the sense that it is hard to evacuate civilians on a large scale when order collapses or an enemy regime takes over. But they added that Biden’s talking point may obscure important questions about the timing and execution of the Afghanistan mission and evacuation.

Why people are left behind

The British evacuation of Dunkirk, France, during World War II is sometimes considered a model for strategic retreats. The 1940 evacuation from the French port of Dunkirk brought some 198,000 British and 140,000 French and Belgian troops to safety in England.

But even there, "thousands of British soldiers were left behind to be captured by the Germans," said David Silbey, a Cornell University historian

"That doesn’t mean Dunkirk wasn’t a success," Silbey added. "It just means that evacuations in the chaos of conflict are hard, and it’s essentially impossible to get every single person out. The right way to talk about success is along a spectrum. Did the evacuation get the vast majority of people out? Fewer? Could it have gotten more out?"

Silbey and other experts said they could not think of an evacuation where every person who wanted to leave got out at the end of or during a war.

Most Dunkirk-style evacuations concerned military forces, not tens or hundreds of thousands of civilian refugees. Janda said such mass refugee situations followed the Soviet takeover of Eastern Europe after World War II and the partition of India and Pakistan in 1947.

"Cuba, Vietnam and Cambodia come to mind as instances where exfiltration was pretty haphazard," said John Pike, director of globalsecurity.org.

Guaranteeing safety to civilian groups of any significant size at the end of a war is "impossible," especially if it involves extraction across a country, said Sahr Conway-Lanz, author of "Collateral Damage: Americans, Noncombatant Immunity, and Atrocity after World War II." 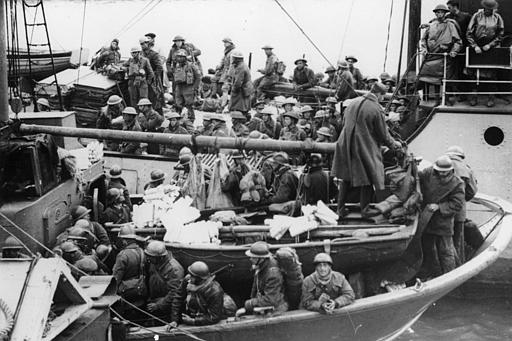 After a successful emergency sealift from a beachhead at Dunkirk, these British and French soldiers arrived safely at a British port in June 1940. (AP)

It’s worth noting that some of the people seeking to leave a conflict "are human-rights abusers, criminals, or others who benefited from the prior regime, so not everyone is fleeing persecution," said Steven R. Ratner, a law professor and director of the University of Michigan’s Donia Human Rights Center.

In some cases, prisoner exchanges are negotiated between combatants after the conclusion of a war, but "implementation is never perfect," said Michael O’Hanlon, a foreign policy specialist at the Brookings Institution.

The historians said the Biden administration’s pullout from Afghanistan will be scrutinized for many reasons apart from the typically messy endings of historical conflicts.

For instance, some experts said the United States didn’t make clear who would be prioritized during the evacuation.

"We haven’t even been really clear on who we’ve wanted to get out," Silbey said. "U.S. citizens, of course. Afghan civilians who have (special immigrant visa) status? Yes. Their families? Nuclear or extended? Who else? We haven’t had that discussion, because the evacuation had to be ramped up so quickly that there wasn’t time to do it."

"The United States alone determined the timing and manner of its withdrawal," Rosen said. "If the administration believed that extracting willing American citizens and Afghan allies was important, it would have ensured their removal before taking the troops out."

Pike’s group, globalsecurity.org, was contacted by a half-dozen Afghans seeking assistance leaving the country. He said the U.S. exit from Afghanistan may have looked messy to today’s audience, but to students of history, it was "par for the course."

"It only seemed nasty to people who had not been paying attention," Pike said.

Email interview with Joshua Landis, director of the Center of Middle East Studies and the Farzaneh Family Center for Iranian and Persian Gulf Studies at the University of Oklahoma, Aug. 31, 2021