How are Afghan refugees being vetted? Here’s what we know

A woman steps onto an arriving bus carrying Afghanistan refugees to give them instructions as they arrive at a processing center in Chantilly, Va., Monday, Aug. 23, 2021, after arriving on a flight at Dulles International Airport. (AP)

• Between Aug. 14 and the afternoon of Aug. 25, the U.S. had flown 82,300 people out of Kabul, according to official figures. These include a mix of U.S. citizens, green card holders, recipients of a special immigrant visa for helping the U.S. military or diplomats, refugees, and people seeking temporary humanitarian parole.

• Afghans who are cleared to fly to the U.S. are brought to military bases, where vetting usually continues.

• Government officials and experts say the vetting being done is extensive, but the degree of vetting varies depending on the category of evacuee, and not all the details have been made public.

U.S. officials are working on one of the largest airlifts in U.S. history ahead of an Aug. 31 deadline to leave Afghanistan.

The evacuation effort includes American citizens as well as thousands of refugees and Afghans who helped the U.S. military over two decades of war. Images and footage have shown hectic conditions inside and outside Kabul’s airport, with evacuees packed tightly into cargo planes.

Despite the difficult environment on the ground, President Joe Biden has said U.S. officials are still conducting safety screenings of people boarding planes out of Kabul, and that the U.S. will welcome Afghans who helped the war effort.

"At these sites where they’re landing, we are conducting thorough scrutiny — security screenings for everyone who is not a U.S. citizen or a lawful permanent resident," Biden said on Aug. 22. "Anyone arriving in the United States will have undergone a background check."

Former President Donald Trump, who initiated the U.S. withdrawal, contended that the opposite is happening — that "thousands of terrorists" have been airlifted out of Afghanistan and there is "no vetting." But immigration experts said they don’t believe the assertion about terrorists, and no evidence was offered to support the claim.

Still, it’s hard to independently verify specifics about the screening process given the evolving situation. Here’s what we know so far about the vetting process for Afghans arriving in the U.S.

Officials are frequently updating the overall numbers of people flown out of Kabul, sometimes more than once a day.

Roughly 4,500 of the total evacuees were U.S. citizens, Blinken said, including 500 during the most recent 24-hour period. Another 500 U.S. citizens who are still in Afghanistan have been in contact with U.S. officials and have been given instructions on how to leave, Blinken said. This leaves 1,000 American citizens whose status is unknown despite State Department outreach; that number could include some who had already left Afghanistan without telling U.S. officials, he said.

The evacuees fall into several categories:

• Holders of green cards, who are legal permanent residents of the U.S.

• Applicants or recipients of other types of visas. These can include student or business visas and pending green card applicants.

• Refugees. Generally speaking, refugees are people who are unable or unwilling to return home because they fear serious harm. They need to demonstrate to a U.S. immigration official overseas that they were persecuted or fear persecution in their home country due to race, religion, nationality, political opinion or membership in a particular social group.

• Humanitarian parole. This is a temporary safe passage into the U.S. for urgent humanitarian reasons or significant public benefit.

Recent official statements have not broken down numbers of evacuees in each of these categories.

Under the SIV category, the government has prioritized applicants who have received initial vetting in recent days, weeks or months, said State Department spokesperson Ned Price on Aug. 23. Price said that before anyone is brought to the U.S., the person undergoes a "rigorous vet" which includes "intelligence, it includes law enforcement, counterterrorism professionals, to ensure that we are being faithful to the high and rigorous security standards."

Other evacuees are considered refugees. The State Department announced in August a "Priority 2" designation granting access to the U.S. Refugee Admissions Program for Afghan nationals and their eligible family members. Eligible individuals included Afghans who did not meet the minimum time in service for the special immigrant visa, Afghans who worked for a U.S.-funded program or project, and Afghans employed by U.S. media or nongovernmental organizations.

Refugees arrive in the U.S. after passing background checks and other screenings. However, we have found in the past that no vetting system is foolproof, and there are challenges to collecting data even in settings less urgent than the airport in Kabul. 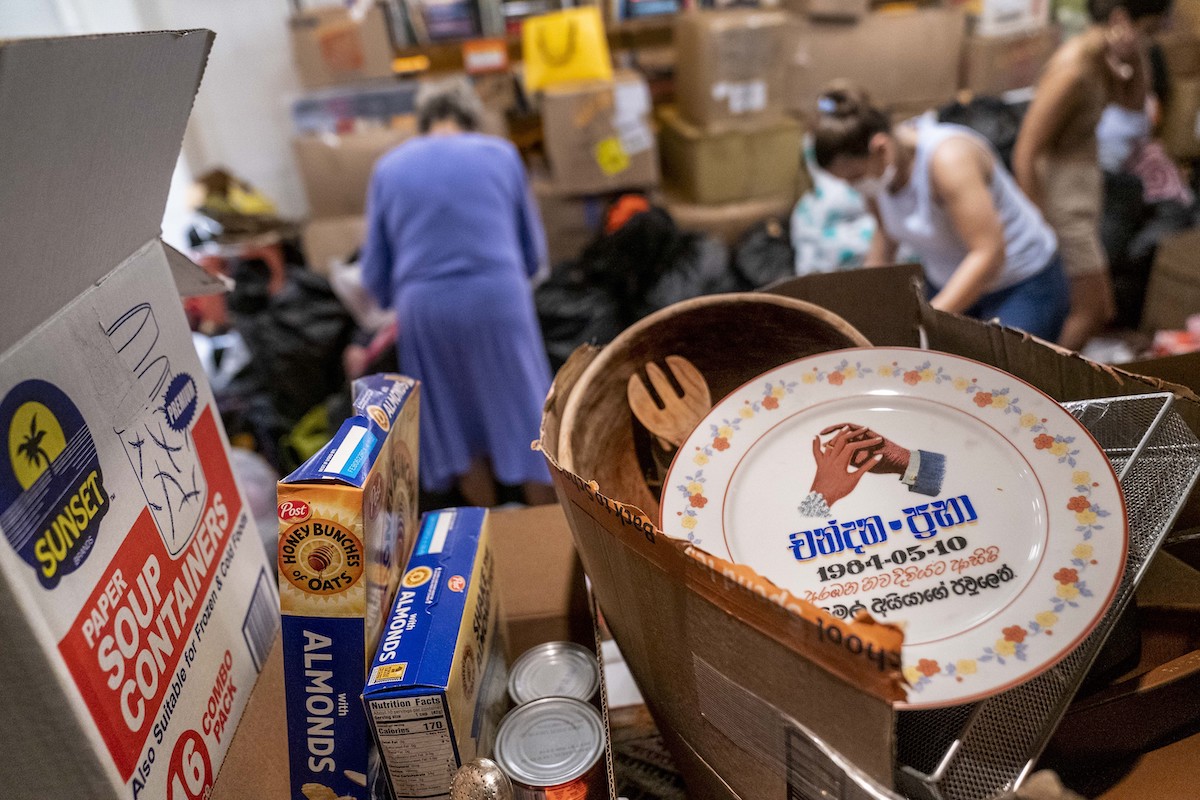 Volunteers receive, sort, and pack thousands of items donated to Afghan refugees at Lapis, an Afghani restaurant in Adams Morgan neighborhood of Washington on Aug. 19, 2021. (AP)
How does vetting work?

U.S. officials have emphasized that the vetting of evacuees is thorough, but they have not provided much detail.

As of Aug. 25, approximately 300 personnel from multiple U.S. government agencies (such as Immigration and Customs Enforcement and the Coast Guard) have been sent to military bases in Bahrain, Germany, Kuwait, Italy, Qatar, Spain and UAE, to help with screenings.

The FBI, Defense Department and other agencies assist with the vetting process, which includes biometrics such as fingerprinting and interviews. That information is then checked against U.S. government databases.

Afghans who are cleared to fly to the U.S. are brought to U.S. military bases, where more U.S. immigration personnel have been stationed.

The particulars of vetting vary depending on the person’s immigration status, said Spencer Tilger, spokesperson for the International Refugee Assistance Project. "Each process is different and takes a different amount of time," he said.

For instance, applicants of the special immigrant visa, or SIV, must provide documentation of their U.S. affiliation and letters from their employer and a supervisor.

"First, Afghans seeking to work for the U.S. government in Afghanistan went through some screening at the time of their employment," said Julia Gelatt, a senior policy analyst at the Migration Policy Institute. "Second, in order to qualify for an SIV, applicants have to document their record of service with the U.S. government or a U.S. government contractor and obtain a letter of recommendation from a U.S. citizen supervisor. Therefore, people obtaining SIVs are already known and trusted by U.S.-based entities."

The U.S. appears to have stopped processing these applications in Afghanistan in order to focus on the evacuation, Gelatt said.

"The State Department is trying to speed up the vetting processing for SIV applicants, but it is still taking several months," added Stephen Yale-Loehr, a professor of immigration law practice at Cornell Law School.

Much of the details about the vetting process is not public, Tilger said. "We understand that SIV screening includes many of the same checks as refugee processing, but we do not know to what extent they are similar."

Where are the refugees going?

Refugees have been taken temporarily to countries in Europe and Asia, and some have begun to arrive at several U.S. military bases.

Refugees have started to arrive at Fort McCoy in Wisconsin; Fort Lee in Virginia; and Fort Bliss in Texas. As of Aug. 23, there were approximately 1,200 evacuees at the sites. Afghans might soon also come to Joint Base McGuire-Dix-Lakehurst in New Jersey, according to news reports.

Pentagon spokesman John F. Kirby has said that the goal is to host 25,000 Afghans on these bases in the next few weeks.

Fort Lee Army base in Virginia said in a Facebook post that the base received special immigrant visa applicants, their families and other people who were at risk.

"This is in addition to the small number of Afghans currently finalizing their processing at Fort Lee," the base’s Facebook post said.

Refugee Services of Texas expected 574 refugees to resettle by the end of September across Dallas, Fort Worth, Houston, Amarillo and Austin, according to the Austin American-Statesman, also a PolitiFact partner.

The State Department is not providing specifics on housing locations, processing timelines or onward destinations, a spokesman told PolitiFact.

RELATED: All of our fact-checks about Afghanistan

White House, Remarks by President Biden on the Ongoing Evacuation Efforts in Afghanistan and the House Vote on the Build Back Better Agenda, Aug. 24, 2021

Austin American-Statesman, 324 Afghans to be resettled across Texas; 5 families expected in Austin this week, Aug. 17, 2021

CBS, Afghan Refugees To Be Housed At Joint Base McGuire-Dix-Lakehurst In Burlington County, Aug. 23, 2021

CNN, Here's how Afghan refugees coming to the US are being vetted

BBC, Afghanistan: Where will refugees go after Taliban takeover? Aug. 25, 2021