As questions mount over the police response to the Uvalde, Texas, school shooting, some Facebook users are singling out one brave father for taking extraordinary measures at Robb Elementary School — but they’re also botching his story.

"In case anyone missed it, the man that killed the school shooter in Texas wasn't even an on duty officer!!" one viral Facebook post claimed. "It was a parent and spouse of a 4th grade teacher, he just happened to be a border patrol agent."

The post includes photos and links to a recent Newsweek article about Jacob Albarado, an off-duty Border Patrol agent whose wife and daughter were in the school during the attack. At the end of the Facebook post, the author wrote: "He then evacuated his wife and daughter and went back in and shot the suspect." 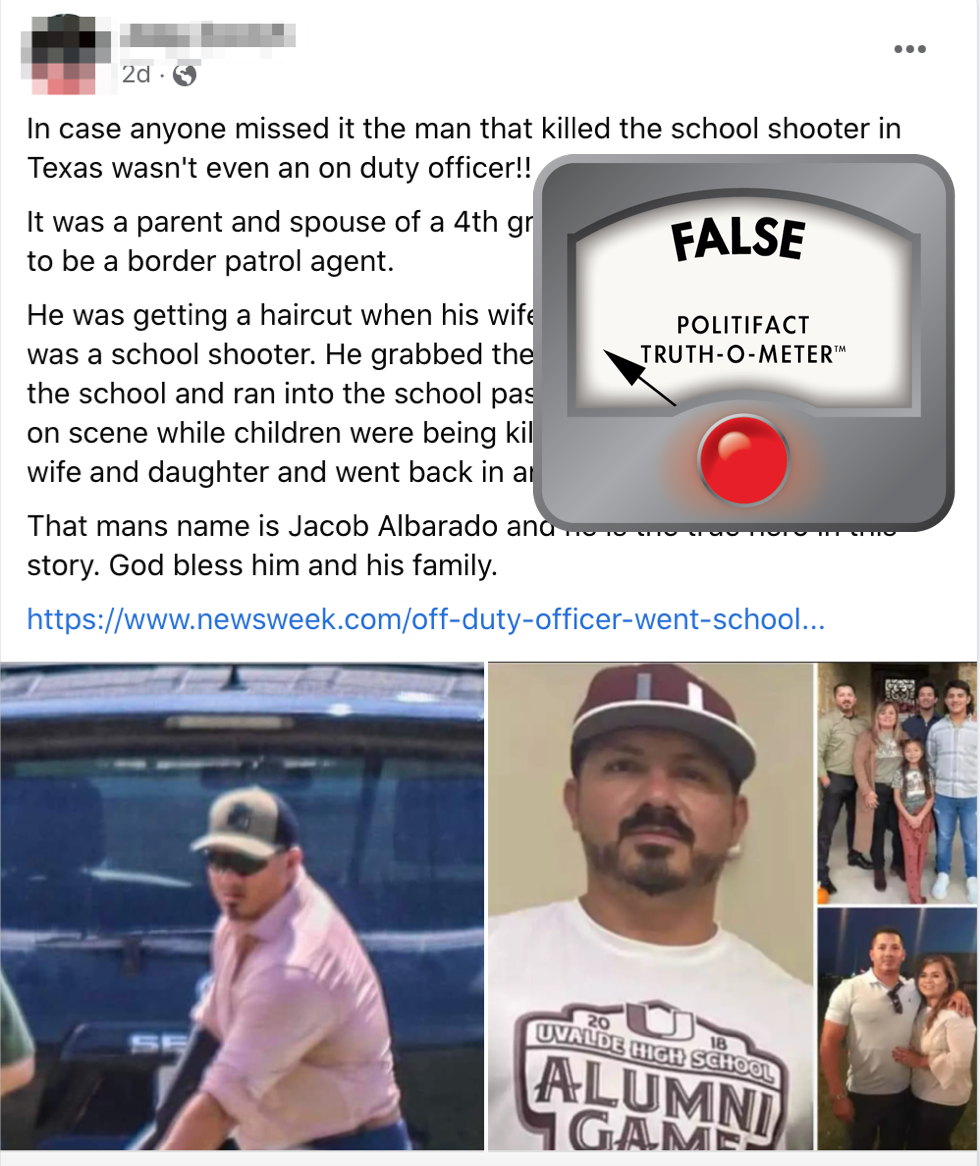 The post gets some details right, but multiple things wrong. According to a report by the New York Times, which the Newsweek article cites, Albarado rushed to the school with a borrowed shotgun and, working with other officers, helped evacuate children.

But neither article said Albarado was the one who shot and killed Salvador Ramos, the 18-year-old gunman. Law enforcement credited a tactical team for that, though they haven’t named the people involved.

Albarado appeared on "Today" on May 31 and confirmed that he wasn’t on duty and didn’t have any gear but said he helped evacuate children from outside.

We reached out to U.S. Customs and Border Protection and Texas Department of Public Safety for comment but did not hear back.

The New York Times included an excerpt about Albarado’s actions in a May 26 story about Uvalde parents who were furious about law enforcement’s delayed response. The Justice Department is reviewing police actions that day.

The story said that Albarado was about to get a haircut when he received a text from his wife, Trisha, a fourth-grade teacher at Robb Elementary, who told him there was an active shooter and asked for help.

Albarado sped to the school with the barber’s shotgun, the story said. Once he arrived, he learned that a tactical team was forming to go inside the wing with the gunman.

"So Mr. Albarado quickly made a plan with other officers at the scene: evacuate as many children as possible," the Times reported. "Two officers provided cover, guns drawn, he said, and two others guided the children out on the sidewalk."

Instagram posts
stated on November 8, 2022 in a post
“Many elections in Bexar are being called with 0% of precincts reporting! I smell MAJOR FRAUD!”

The story never said Albarado was the one who killed Ramos. On the contrary, it says that a tactical team shot and killed Ramos after breaching the classroom.

But that didn’t stop the social media version of events from taking off.

In another version of the claim, Albarado was "first in the line of fire" and cleared every "wing of the school" before busting down the door to the room where Ramos was and killing him.

Albarado appeared on "Today" to talk about what happened at the school. He told anchor Savannah Guthrie that he didn’t have any gear and wasn’t on duty, so he didn’t go inside the school.

"I met up with one of the officers there, trying to see what was going on, I tried to make my way toward the door. Like I said, I didn’t have any of my gear, I was off duty, so I didn’t go in," Albarado said in the May 31 interview.

As he was helping kids evacuate outside the building, Albarado said his wife contacted him and told him she made it out and that his daughter was across the street at the funeral home.

Albarado said he went to make sure his daughter was safe and then continued to help. He said he didn’t know where Ramos was at the time or whether he was still in the building.

In a May 27 news conference, Texas Department of Public Safety director Steven McCraw described how Uvalde police officers, Border Patrol agents and other law enforcement assembled in the hallway of the school, eventually breaching the room where Ramos was located around 12:51 p.m.

"They killed the suspect," McCraw said.

Ramos was killed approximately one hour and 20 minutes after he first entered the school.

Newsweek, Off-Duty Officer Went Into School During Uvalde Shooting to Find Daughter, May 27, 2022

Today.com, Off-duty agent recalls rushing to Texas school to evacuate students during shooting — including his daughter, May 31, 2022