A grainy image captured by NASA’s Mars Curiosity rover in May 2022 shows a formation in the planet’s rock that social media users seized on as some kind of alien door, suggesting it shows the presence of life.

"Photo From Mars Curiosity Rover Looks Like We Found a Doorway," reads a headline from a website called the "Good News Network."

"NASA released this photo from the Mars Rover of an apparent doorway on Mars," one Facebook post featuring the image said.

Sorry to be the bearer of bad news, but while NASA did capture the image at the center of this claim, it didn’t find a secret, alien doorway on Mars. 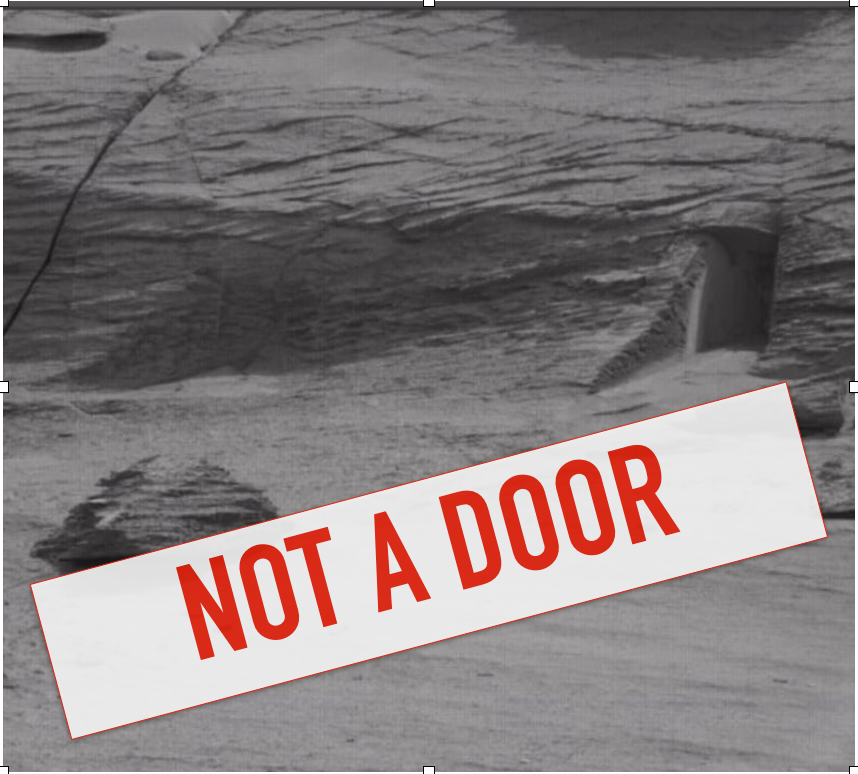 Space officials and Mars experts said the formation is an unremarkable, naturally-occurring crevice that matches many others seen around the planet.

The claim was addressed in a Twitter thread authored by the NASA-run Curiosity Rover account that called the formation a natural geological feature.

"Some of you have noticed this image I took on Mars. Sure, it may look like a tiny door, but really, it’s a natural geologic feature! It may just *look* like a door because your mind is trying to make sense of the unknown."

Some of you have noticed this image I took on Mars. Sure, it may look like a tiny door, but really, it’s a natural geologic feature! It may just *look* like a door because your mind is trying to make sense of the unknown. (This is called "pareidolia") https://t.co/TrtbwO7m46 pic.twitter.com/VdwNhBkN6J

It’s somewhat common for people to see patterns in rock shapes that look like one thing or another, said Andrew Good, a spokesperson for NASA’s Jet Propulsion Laboratory.

"This is called pareidolia, and despite all the sensitive science instruments on the rover and the mission’s hundreds of scientists working with our data, we have not seen anything that isn’t easily explainable," Good said. "Sometimes it’s weird shapes in the rocks, sometimes it’s ‘bad pixels’ that leave irregular marks in some of the images."

William Dietrich, an earth and planetary science professor at the University of California, Berkeley, who studies landscape form and evolution, said the perceived doorway is a result of rock movement.

"You can see that the feature resulted from the shedding of a block of rock, leaving a wedged shaped cavity, and you can see the back of the cavity," Dietrich said. "Another image (that) covers a larger area on this hill shows many other examples of loose blocks. Displacement of these loose blocks downslope could lead to such a cavity."

NASA shared additional images of the area and said the rover used its mast camera on May 7 to capture the photo of the mound of rock, nicknamed the East Cliffs.

The mound, located on Mars’ Mount Sharp, has a number of naturally-occurring open fractures, NASA said.

The opening featured in the posts is roughly 12 inches tall and 16 inches wide, similar in size to a dog door. The image shared online has been magnified, officials said, making the formation appear significantly larger than its real size.

"These kinds of open fractures are common in bedrock, both on Earth and on Mars," the organization said.

NASA says that Curiosity, which has been on Mars since 2012, is currently investigating a region on Mount Sharp that may hold evidence of a major change from wetter to drier conditions in the planet’s early history.

Posts on social media claim that NASA released an image that shows a doorway on Mars, suggesting life on the planet.

NASA officials and Mars experts did release a photo of a rock formation that, at some angles, looks like a doorway-shaped structure. But NASA dismissed claims that the formation is evidence of extraterrestrial life and said the opening is an unremarkable, naturally-occurring crevice that matches many others on the planet.

Email interview, William E. Dietrich professor of earth and planetary sciences at the University of Berkeley, May 23, 2022