A series of photos shared on social media appears to show a man in Mariupol, Ukraine, swapping out a dilapidated blue and yellow Ukrainian flag hanging from an industrial building with the red flag of the former Soviet Union.

"Illich, steel factory, Mariupol. Victory is Red. For the motherland," reads the caption of an April 18 Instagram post that shared the collage. Similar posts have also spread on Twitter. 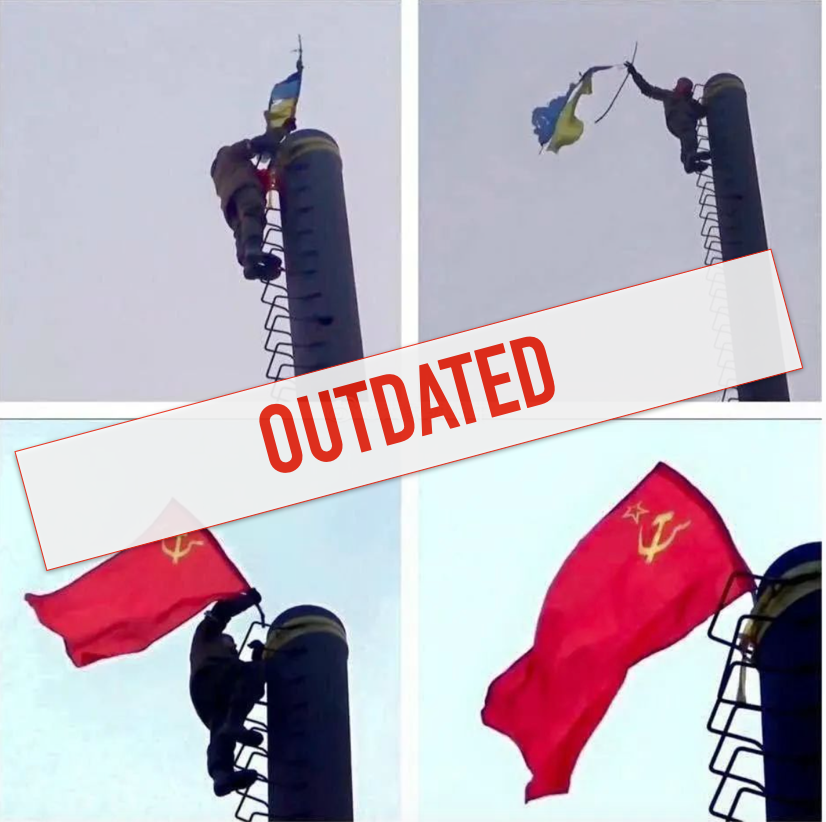 The photos are real, but they’re outdated and do not appear to have been taken in Mariupol. The social media posts were miscaptioned.

A reverse-image search shows that the collage has been around since at least 2015. The four images appear to be screenshots taken from a YouTube video posted on March 3, 2015. (The images can be seen around the one-minute mark).

The brigade is a separatist group in Ukraine’s eastern Donbas region. The region includes the city of Debaltseve (also spelled Debaltsevo), which pro-Russian forces seized in February 2015.

Visegrad24, a group that aggregates news from various European countries including the Czech Republic, Hungary, Poland and Slovakia, shared the collage on Twitter, saying "this is what the occupying forces did in Debaltseve in 2015 after taking control of the city." The city appears to still be in their control.

News reports from 2015 describe the Prizrak Brigade as having taken part in "some of the heaviest battles in Ukraine’s pro-Russia east" since the start of the conflict in 2014.

Around 100 civilians were recently evacuated from the steel factory in Mariupol, seen as one of the last Ukrainian strongholds in the city, which has otherwise come under Russian control.

A collage shared online claims to show Russian forces replacing the Ukrainian flag with the Soviet Flag in Mariupol in 2022.

Iterations of the collage have been online since at least 2015 and appear to feature screenshots of a video that shows pro-Russian forces taking control of the eastern Ukrainian city of Debaltseve.

The Guardian, Separatist commander killed in Ukraine, May 24, 2015

The Ukrainian Weekly, Looking back at the Battle of Debaltseve, March 8, 2019