Since the start of the war in Ukraine, Russian President Vladimir Putin has tried to justify his invasion by falsely claiming that the action was taken to "denazify" the country and its leadership.

Ukraine President Volodymyr Zelenskyy is Jewish and said he’s had family members who were killed in the Holocaust. Yet some social media users are spreading rumors that he wears a Nazi symbol on his shirt.

Their focus is on a symbol of a cross that can be seen on some of the green military T-shirts that Zelenskyy has worn in several virtual addresses. Implications that Zelenskyy is supporting Nazis by wearing the shirt can be found on Reddit and across Facebook.

"The 1933 German group wore that symbol," says one post that shows an image of Zelenskyy wearing the shirt with the cross circled alongside the text "Nazi Iron Cross."

"What exactly is going on here?" questions a post on Twitter that shared the same image of Zelenskyy with a screenshot of a definition of the "iron cross" being a military decoration in the German empire and Nazi Germany.

Some posts were flagged as part of Facebook’s efforts to combat false news and misinformation on its News Feed. (Read more about our partnership with Facebook.

Zelensky did not wear a Nazi symbol. The cross on his shirt is the official emblem of Ukraine’s armed forces and includes the country’s coat of arms in the center. The emblem was officially adopted in September 2009 and is featured on the Ukrainian military’s website and social media accounts. 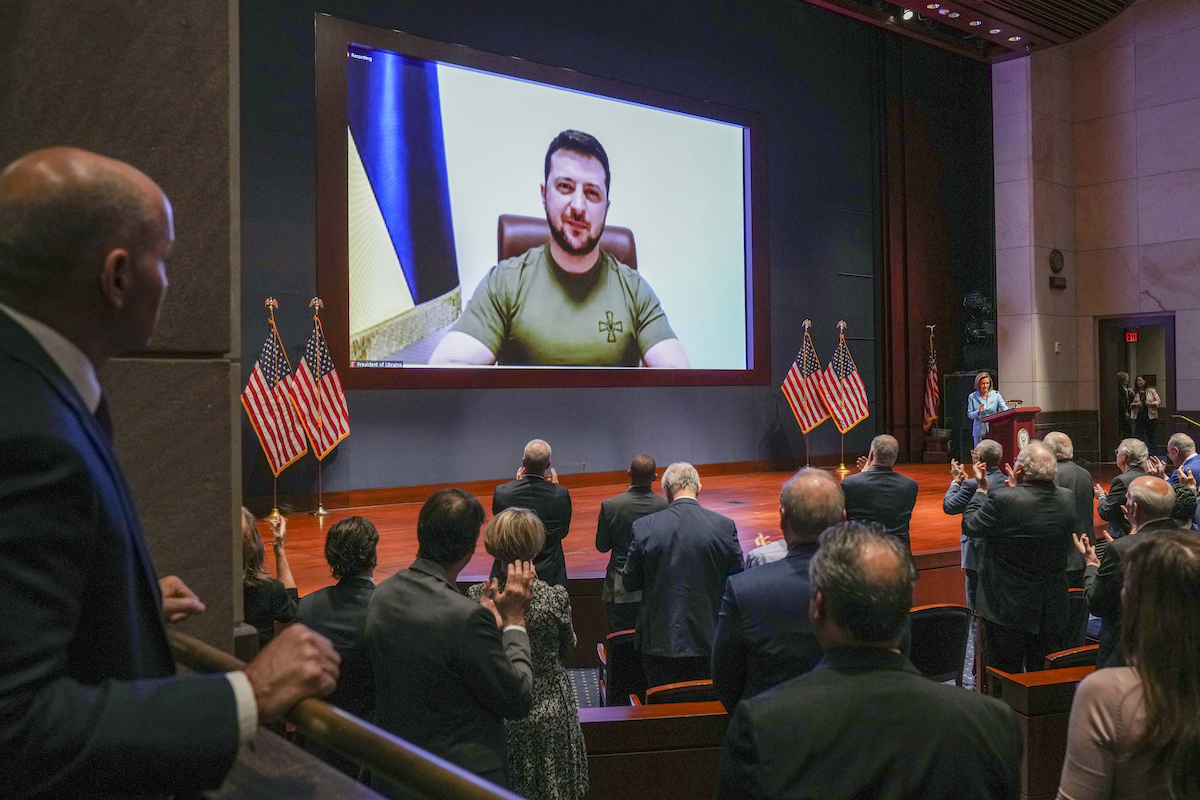 Members of Congress give Ukraine President Volodymyr Zelenskyy a standing ovation before he speaks in a virtual address to Congress on March 16, 2022, in the U.S. Capitol in Washington. (AP)

It features the tryzub, the blue and gold trident of Ukrainian medieval leader ​​Vladimir the Great, at the center of a crimson-colored cross.

Researchers with the Anti-Defamation League, which studies and tracks extremism and anti-semitism around the world, confirmed to PolitiFact that Zelenskyy isn’t wearing a hate symbol.

The Iron Cross is a famous German military medal dating back to the 19th century, the ADL says on its website, and isn’t a hate symbol on its own. It was turned into a Nazi symbol when the regime superimposed a swastika in the center of the medal.

Social media posts claim that a Nazi symbol can be seen on Zelenskyy’s T-shirts.

This is wrong. The symbol visible on Zelenskyy’s shirt is the official emblem of Ukraine’s military and doesn’t represent a Nazi Iron Cross.

Ministry of Defense of Ukraine, Decree president of Ukraine on symbols used in the armed forces of Ukraine, Sept. 3, 009