Facebook posts
stated on February 27, 2022 in a Facebook post:
“The former Miss Universe-Ukraine, Anastasiia Lenna, turned in her high heels for some combat boots to fight for her country.”

Stories of Ukrainian citizens taking up arms to defend their country have flooded the internet since Russia’s invasion. And while many of these accounts are legitimate, posts about a Ukrainian beauty queen taking up arms are not.

A photo of Anastasiia Lenna, who was crowned Miss Grand Ukraine in 2015, wearing protective eyewear and holding a gun has gone viral alongside claims that she joined the military to help fight Russians.

"Can we take a moment to acknowledge the fact that the former Miss Universe-Ukraine, Anastasiia Lenna, turned in her high heels for some combat boots to fight for her country…Real life super hero," one Feb. 27 Facebook post reads.

The photo featured in the posts does show Lenna, but it doesn’t show her taking up arms against Russia. The image is staged and Lenna is holding an airsoft gun. Airsoft guns often resemble firearms but shoot nonlethal, plastic pellets. 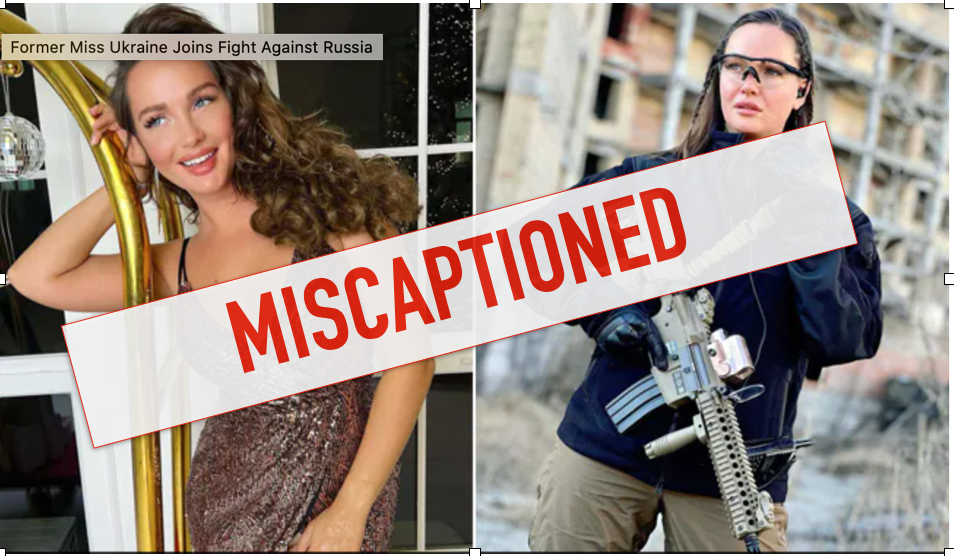 The confusion started after Lenna shared the image on her Instagram page on Feb. 22 with the hashtags #standwithukraine and #handsoffukraine. Although Lenna never said she joined the Ukrainian military, she did re-share posts from others commending her for "putting down her crown and sash to defend her country."

Lenna later clarified in a follow-up Instagram post on Feb. 28 that she did not join the military. She said the image was meant to inspire people.

Lenna has shared several images of herself playing airsoft on her Instagram page with hashtags like #airsoftgirls and #airsoftqueens.

That’s not the case. Lenna did not join the Ukrainian military. She posted a photo in which she’s posing with an airsoft gun. She said the photo was meant to inspire people.

Times of India Fact Check: No, former Miss Ukraine is not fighting Russians in the ongoing invasion, March 1, 2022