Facebook posts
stated on January 11, 2022 in a Facebook post:
“The CDC director just said that 75% of ‘Covid deaths’ occurred in people with at least four comorbidities.”

Dr. Rochelle Walensky, Director of the Centers for Disease Control and Prevention, testifies during a Senate Health, Education, Labor, and Pensions Committee hearing to examine the federal response to COVID-19 and new emerging variants, Jan. 11, 2022

Dr. Rochelle Walensky, one of the nation’s top public-health officials, shared encouraging news in a TV interview about the effectiveness of vaccines in preventing COVID-19 deaths. But social media posts and articles seized on an edited clip of the interview to falsely suggest that she was downplaying the seriousness of COVID-19.

"The CDC director just said over 75% of ‘covid deaths’ occurred in people with at least four comorbidities," reads a Facebook post from Freedom Works, a conservative and libertarian advocacy group based in Washington. "Since Biden can’t shut down covid, suddenly all this data is getting shared publicly."

Conservative news websites the Western Journal and Town Hall chimed in, calling it a "shocking" and "damning" admission.

75% of “Covid Deaths” were in people with at least 4 comorbidities according to the CDC.

But these claims, based on an edited clip of an interview that Walensky gave on ABC’s "Good Morning America," are missing important context, and substantially distort the meaning of her comments.

Walensky, director of the Centers for Disease Control and Prevention, was referring to a new CDC study that found over 75% of deaths among vaccinated individuals involved people who had at least four comorbidities, such as another disease, risk factor or health condition. The statistic bolsters the argument that vaccines are effective against COVID-19.

The social media claims didn’t mention that the study was on vaccinated people, which gave the misleading impression that Walensky was saying that overall deaths attributed to COVID-19 were largely due to other conditions.

The confusion began when ABC News initially released a shortened version of Walensky’s Jan. 7 interview. This version, which quickly spread online, showed Walensky responding to a question from White House correspondent Cecilia Vega about how the study seemed to show vaccines working to prevent severe illness.

"The overwhelming number of deaths, over 75%, occurred in people who had at least four comorbidities," Walensky said. "So really, these are people who were unwell to begin with."

Michele Bachmann
stated on May 9, 2022 in an interview on Steve Bannon's "War Room" podcast
“The Biden administration is bringing amendments that would propose that all nations of the earth cede their sovereignty over national health care decisions to the WHO.”

The clip does include Vega mentioning encouraging news about vaccine effectiveness, but the edit cuts off the beginning of Walensky’s response, which makes clear that she was referring to a study of vaccinated people.

Here is the full exchange:

VEGA: "I want to ask you about those encouraging headlines that we're talking about this morning, this new study showing just how well vaccines are working to prevent severe illness. Given that, is it time to start rethinking how we're living with this virus, that it’s potentially here to stay?"

WALENSKY: "A really important study if I may just summarize it, a study of 1.2 million people who were vaccinated between December and October and demonstrated that severe disease occurred in about 0.015% of the people who receive their primary series. And death in 0.003% of those people. The overwhelming number of deaths, over 75%, occurred in people who had at least four comorbidities, so really these are people who were unwell to begin with. And yes, really encouraging news in the context of omicron. This means not only just to get your primary series, but to get your booster series. And yes, we’re really encouraged by these results."

The study involved just over 1.2 million people who completed their primary vaccination series — two shots for mRNA vaccines — from December 2020 through October 2021. It found that severe COVID-19-associated outcomes or death were rare among the group — 36 died of COVID-19. Risk factors included being over 65 years old or having a suppressed immune system. All people who experienced severe disease had at least one risk factor, the report said, and 28 of the people who died, or 78%, had at least four.

After misinformation started to spread over the weekend about Walensky’s remarks, ABC News published an extended version of the interview with a note at the end. 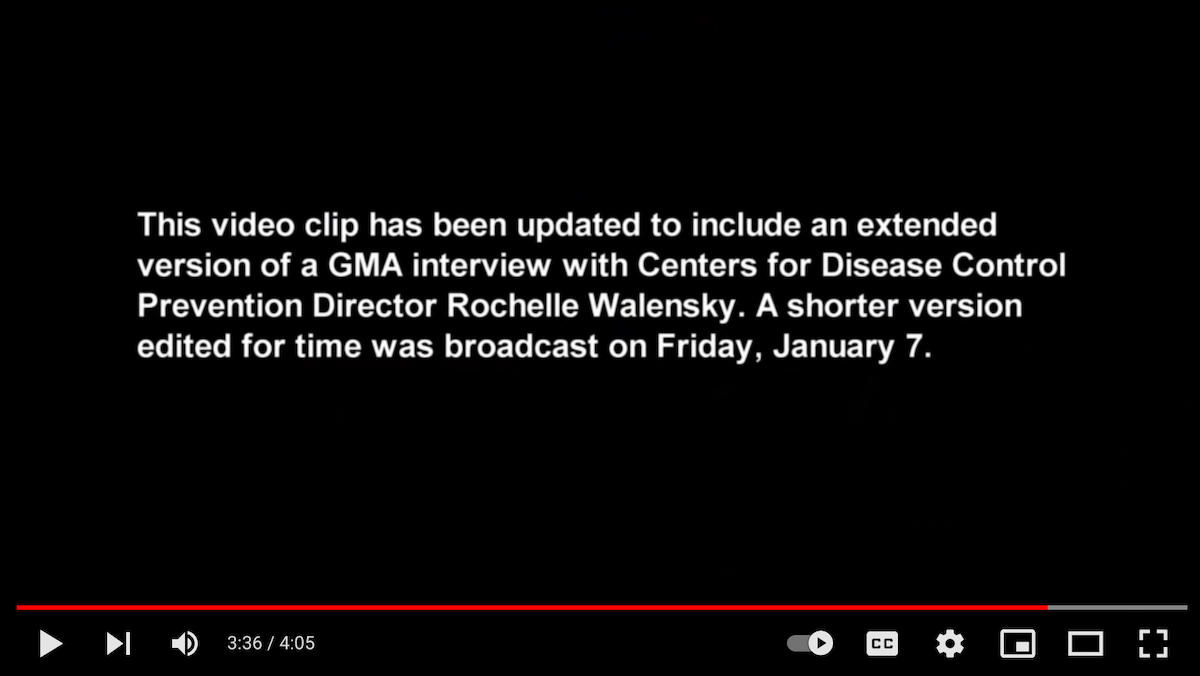 PolitiFact reached out to the CDC but did not hear back. ABC News declined to comment.

Websites and posts on social media claimed that Walensky said 75% of COVID-19 deaths occurred in people with at least four comorbidities.

The claims, based on an edited clip of a TV interview, misrepresent what she said.

She was referring to a study that involved vaccinated individuals only, and said over 75% of deaths in that group involved individuals who had multiple other diseases and conditions. She cited the statistic as evidence that the vaccines were effective in preventing severe disease.

Tweets
stated on May 6, 2022 a tweet:
Supreme Court Justice Clarence Thomas and his wife Ginni posted a photo of themselves enjoying a $5,135 bottle of wine “as American women despair about abortion rights being taken away from them.”

Candace Owens
stated on May 3, 2022 a tweet:
“79% of Planned Parenthood clinics are in minority neighborhoods. This is not by accident. That is by its founder, Margaret Sanger's, eugenicist design."