Viral image
stated on February 14, 2022 in a Facebook post:
Photo shows the freedom convoy in Canberra, Australia, with over 1.5 million cars.

Since late January, truckers have engulfed Canadian cities in protest of the government’s pandemic restrictions and vaccine mandates, snarling traffic and disrupting daily life and multiple trade routes. The situation recently led Canadian prime minister Justin Trudeau to invoke the Emergencies Act — the first time the country’s government has taken such an action in 50 years.

The protest, called the "Freedom Convoy," has also inspired other demonstrations around the world. But it’s also inspired some on social media to misuse images of unrelated events and say they show the protests.

One aerial photo, which shows a massive crowd, was being shared on Facebook with the label that it represents a freedom convoy protest in Australia:

"Canberra, Australia. The freedom convoy is much bigger than expected. Over 1.5 million cars were counted at the rally," text above the photo reads. 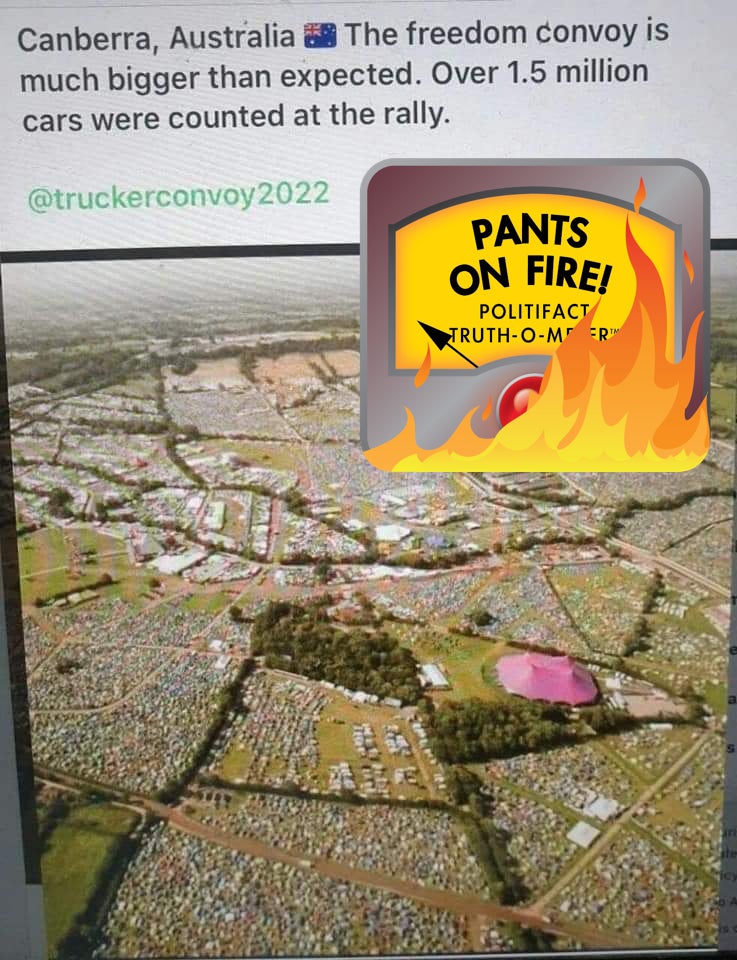 The image was flagged as part of Facebook’s efforts to combat false news and misinformation on its News Feed. (Read more about our partnership with Facebook.)

Facebook posts
stated on September 11, 2022 in a photo on Facebook
Says of 9/11, “Two planes can’t cause three buildings to collapse in free-fall time.”

While the Canberra, Australia, convoy protests are real and have seen large numbers according to Australian law enforcement, this photo doesn’t depict any demonstrators.

A reverse-image search revealed that the photo wasn’t taken in Australia, or this year.

It was captured on June 26, 2019, at the Glastonbury Festival in England. The annual five-day event takes place at Worthy Farm between the small villages of Pilton and Pylle in Somerset. In addition to contemporary music, the festival hosts dance, comedy, theater and other arts and sees an average of 200,000 attendees each year.

Despite the Facebook post’s claim of "1.5 million cars," Australian police have estimated that the largest "convoy to Canberra" rallies have attracted around 10,000 people so far.

The photo was taken in a different country in a different year, and the 1.5 million figure is implausible for either event. It’s way larger than the festival’s average and nearly four times the population of Canberra.

Alamy.com, An aerial view of the Glastonbury Festival site at Worthy Farm in Somerset., Accessed Feb. 15, 2022