In the closing days of Virginia’s governor race, a group of people carrying tiki torches and wearing white shirts, khaki pants and baseball caps stood outside the bus for Glenn Youngkin, the state’s Republican gubernatorial candidate, at a campaign stop in Charlottesville.

The Oct. 29 demonstration, aimed at mimicking torch-carrying white supremacists who came to the city in 2017 for a Unite the Right rally, drew condemnation from both political parties and speculation over who was behind the stunt.

"All reports are indicating that Virginia Democrat operatives dressed up as white supremacists and stood by Youngkin’s bus," one Facebook post claimed that day. "It’s clear McAuliffe’s campaign is spiraling out of control and they are resorting to last ditch efforts to sneak out a win. These racist acts by the Dems are despicable and this should be covered by the media." 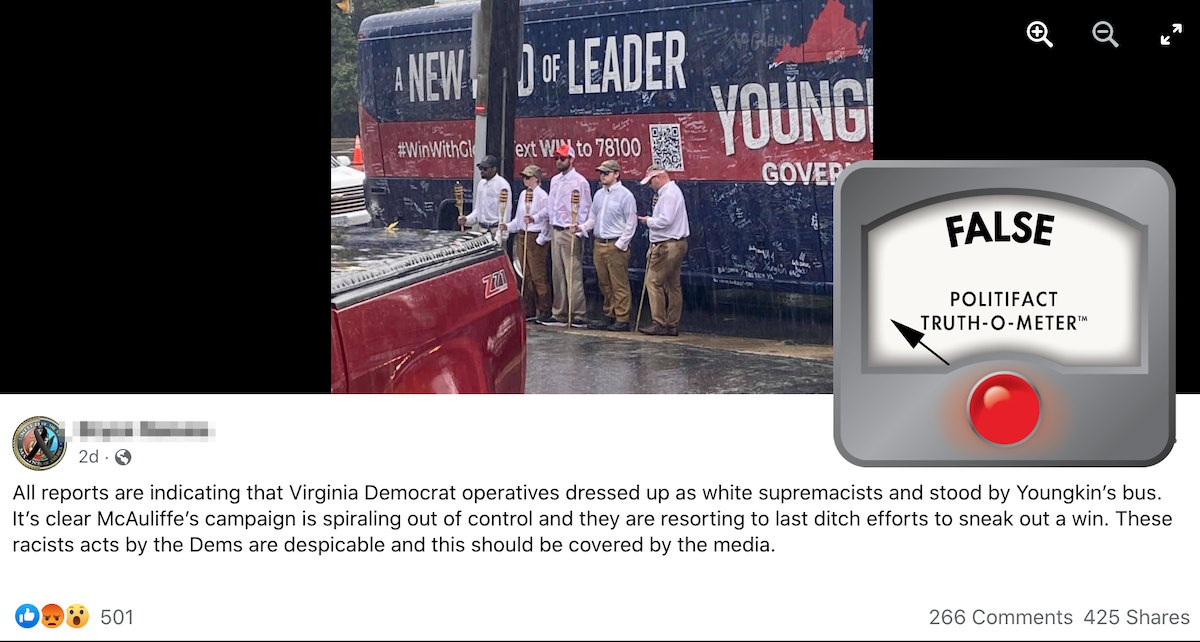 While we don’t know the identities of the people involved, we can clarify who organized them. It wasn’t the Democratic Party of Virginia or the campaign for Youngkin’s Democratic opponent, Terry McAuliffe.

It was the Lincoln Project, a Republican group that actively opposed the re-election campaign of former President Donald Trump.

Shortly after people started pointing fingers over the Youngkin campaign trail incident, the Lincoln Project took responsibility for the demonstration. The stunt came during the second day of the civil trial against far-right extremists associated with the 2017 rally, which ended with a man driving a car through a crowd, killing one woman.

After images of the five people in front of Youngkin’s bus started to circulate on social media — with some reports stating that the group chanted "we’re all in for Glenn" — McAuliffe staffers attacked Youngkin over it, suggesting that the images showed Youngkin’s supporters. The Youngkin campaign, in turn, claimed the McAuliffe campaign or the Democratic Party of Virginia were involved.

That’s around the time when the Lincoln Project released a statement.

"Today’s demonstration was our way of reminding Virginians what happened in Charlottesville four years ago, the Republican Party’s embrace of those values, and Glenn Youngkin’s failure to condemn it," the statement said.

McAuliffe’s campaign disavowed the stunt that evening, calling it "distasteful."

"What happened today in Charlottesville is disgusting and distasteful and the McAuliffe campaign condemns it in the strongest terms," campaign manager Chirs Bolling said in a tweet. "Those involved should immediately apologize."

What happened today in Charlottesville is disgusting and distasteful and the McAuliffe campaign condemns it in the strongest terms. Those involved should immediately apologize.

The Democratic Party of Virginia also issued a statement on Twitter, saying neither the party nor its "coordinated partners and affiliates" had anything to do with the demonstration.

"What happened in Charlottesville four years ago was a tragedy and one of the darkest moments in our state’s recent memories and is an event not to be taken lightly," read the statement shared by the party’s executive director, Andrew Whitley. "For anyone to accuse our staff to have a role in this event is shameful and wrong."

The Lincoln Project told PolitiFact that it did not coordinate "in any way" with McAuliffe’s campaign or the Virginia Democratic Party.

During the 2020 presidential election, the Lincoln Project aimed to prevent the re-election of Trump. Today, it prioritizes attacks on Trump-aligned Republicans like Florida Gov. Ron DeSantis, Texas Gov. Greg Abbott, and candidates like Youngkin. The group also supports these candidates’ Democratic challengers. In Virginia, records show it spent $17,100 on pro-McAuliffe efforts and just over $304,000 on anti-Youngkin campaigns.

While the group was founded by former Republican staffers, most of its leadership doesn’t align with the party anymore, with many registered as Independents.

Facebook posts claim that a group of people who dressed up as white supremacists at Youngkin’s campaign stop in Charlottesville was a political set-up by "Virginia Democrat operatives" and McAuliffe’s campaign.

This is inaccurate. The Lincoln Project, a group founded by anti-Trump Republican consultants, assumed responsiblity for the stunt and said that neither McAuliffe’s campaign nor the state’s Democratic party were involved. Both groups denied involvement and denounced the incident.