We also found the term "baby parts" is wrong and greatly misleading. Scientists use donated fetal tissue as a source of fetal cells. These cells have been used for research since the 1930s, and the government has funded such research since the 1950s, "when it was used to create one of the biggest medical advances of the 20th century: the polio vaccine," according to a recent NBC news report.

Pro-life groups circulated the claims on the same day abortion and women’s reproductive rights took center stage during the start of the Senate Judiciary Committee hearings on President Donald Trump's nomination of Amy Coney Barrett to the U.S. Supreme Court. Democrats view Barrett as a conservative ideologue who could vote to eliminate abortion rights.

Originally published in August, this headline from LifeNews.com was viewed nearly 500,000 times on Facebook the day before the hearings began: "Kamala Harris Tried to Put Pro-Lifers in Jail Who Exposed Planned Parenthood Selling Baby Parts."

The story was flagged as part of Facebook’s effort to combat false news and misinformation on its News Feed. (Read more about PolitiFact California’s partnership with Facebook.)

Several text memes such as the one below also circulated online: 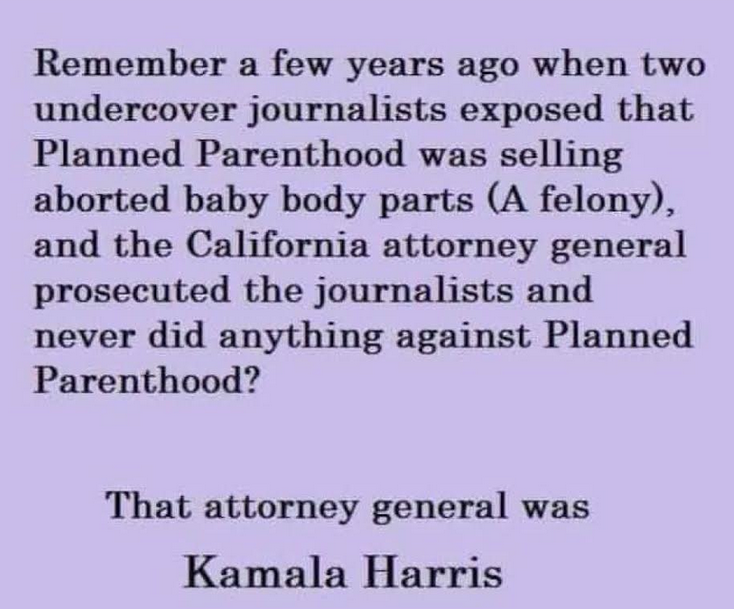 In this fact check, we focused on whether Harris really failed to prosecute Planned Parenthood for "selling baby parts" and then went after two "journalists."

Background On Accusations Against Planned Parenthood

In 2014 and 2015, the organization was accused of illegal fetal tissue sales. The allegations came after two anti-abortion activists from the Center for Medical Progress released edited and undercover videos purporting to show Planned Parenthood staff discussing the transactions.

Though sales are illegal, fetal tissue donations for medical research are allowed under state and federal laws, including the 1993 federal Statute on Fetal Tissue Transplantation Research.

Before a donation is allowed, the federal statute requires that the woman involved must provide written consent. Providers can receive payment to cover the cost of transportation, processing and storage of the tissue.

In 2015, FactCheck.org took a close look at the full, unedited video released by CMP. They found it shows "shows a Planned Parenthood executive repeatedly saying its clinics want to cover their costs, not make money, when donating fetal tissue from abortions for scientific research."

As NPR outlined in 2016, Republican governors from Texas to Florida to Indiana, where now Vice President Mike Pence was governor at the time, all ordered investigations into the accusations against Planned Parenthood after the videos were released, but found no evidence of the illegal activity.

"Despite all the worry, state investigations have yet to find any evidence that Planned Parenthood was selling or profiting off fetal tissue," NPR reported.

In 2019, The New York Times reported the allegations remained unfounded after "numerous congressional and state investigations."

Ederlina Co, an associate professor at McGeorge Law School in Sacramento who studies reproductive rights, said on Monday she was not aware of any state concluding that Planned Parenthood violated the law for selling fetal tissue.

In a recent fact check, Snopes.com described the claims in the text meme as "both inaccurate and misleading."

"It is true that no charges were brought against Planned Parenthood in California — for the sound reason that Planned Parenthood was investigated by multiple states — but none of them found sufficient evidence to support a prosecution over claims that the organization had unlawfully sold (or offered to sell) human fetal tissue."

Several months after the release of the videos, Planned Parenthood said it would no longer accept any sort of payment to cover the costs of making fetal tissue available for research.

Did Kamala Harris Try To 'Put Pro-Lifers In Jail'?

While there’s no evidence to back up the claim that Planned Parenthood was "selling baby parts," the second part about Harris going after two pro-life "journalists" is more muddled.

David Daleiden and Sandra Merritt of the Center for Medical Progress posed as fetal researchers for a made-up company when they surreptitiously recorded Planned Parenthood staff members.

In March 2017, Daleiden and Merritt were charged in California with 15 counts of violating state invasion of privacy laws that prohibit the recording of conversations without consent, according to Snopes. By that time, Harris had won election to the U.S. Senate and left her post as California attorney general.

However, Harris was attorney general in 2015 when she announced she would investigate Daleiden and when her agency seized his laptop and hard drives from his Orange County apartment in 2016.

Anti-abortion groups called for Harris to resign, citing her support for Planned Parenthood, accusing her of a "conflict of interest and abuse of government power."

Planned Parenthood’s political arm recently spotlighted Harris "as a defender of reproductive rights and health care." She has received tens of thousands of dollars in campaign finance contributions from Planned Parenthood affiliated groups, including $15,000 during her 2014 campaign for re-election as attorney general, according to the California Secretary of State’s website.

Last year, Planned Parenthood was awarded up to $2.2 million in damages caused by the videos, according to The New York Times. That award came after a federal jury in San Francisco ruled that Daleiden had broken federal and state laws when he secretly recorded workers for the organization. An attorney for the group said the Center for Medical Progress would appeal the ruling.

It’s correct that Harris as California’s attorney general never brought charges against Planned Parenthood for this activity. But it’s also correct to say the accusations against the organization were unfounded.

A dozen states, many led by Republican governors, investigated the Planned Parenthood after edited videos were released by anti-abortion activists, allegedly showing staffers discussing fetal tissue sales. The full video shows staffers discussed covering the cost of legal fetal tissue donations for medical research. No criminal findings were ever made.

Harris was California attorney general when her office started investigating the activities of the anti-abortion activists. She had moved on to the U.S. Senate by the time charges were brought against them for violating state privacy laws.

In the end, we found these posts are misleading and their central premise is wrong: Planned Parenthood was never found to have "sold baby parts."

We rate the claims False.

NBC.com, What is fetal tissue research? And why is it important to medicine?, June 9, 2019