Ted Cruz
stated on November 5, 2020 in a Fox News interview:
Philadelphia is “clouding the vote counting in a shroud of darkness.”

"I am angry, and I think the American people are angry," Cruz said in a Nov. 5 interview with Fox News host Sean Hannity. "Because, by throwing the observers out, by clouding the vote counting in a shroud of darkness, they are setting the stage to potentially steal an election."

There is no evidence at this point that any significant number of illegal votes have been cast, and neither Trump nor Cruz have provided any proof of wrongdoing.

The Texas senator’s claim about votes being counted "in a shroud of darkness" is also wrong.

Observers from both political parties have had access to the process in Philadelphia and in Pennsylvania more broadly. Philadelphia’s counting setup also includes a livestream.

Hours before Cruz appeared on Fox News, Pennsylvania Secretary of State Kathy Boockvar told CNN’s Jake Tapper there was "absolutely" nothing happening in the dark.

"In Pennsylvania, every candidate and every political party is allowed to have an authorized representative in the room observing the process," Boockvar said, adding that the livestream in Philadelphia is available worldwide. "It’s very transparent."

Hours after Cruz’s comments, Philadelphia City Commissioner Al Schmidt, a Republican, also appeared on CNN. "Observers from the Democratic Party and Republican Party, from the Biden campaign and the Trump campaign, have been in our counting area observing, right up against where the process is taking place, from the very beginning," he told CNN’s Don Lemon.

A Cruz spokesperson said Republican observers have been "denied meaningful access to the ballot processing and counting process in Philadelphia," citing a recent judge’s order allowing observers from both parties to watch the process from within six feet. Observers had previously been kept farther away due to concerns about the coronavirus. 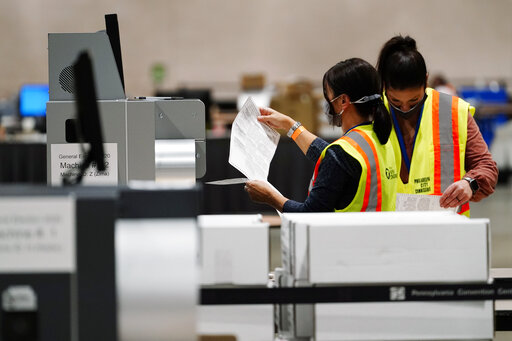 Election workers scan in ballots at the Pennsylvania Convention Center on Nov. 3, 2020, in Philadelphia. (AP)

The city has appealed the judge’s order, saying they have provided access that is in step with the law and accounts for the pandemic. But it has complied in the meantime. Cruz has argued on Twitter that the previous distance was too far.

He wrote that observers were so far away that they "had to use binoculars" — something the Philadelphia Inquirer photographed one election observer doing on Nov. 3.

But Cruz’s claim that Philadelphia is cloaking the process in secrecy is far from accurate.

City solicitor Marcel Pratt told the Philadelphia Inquirer that a location has been set up so observers "can easily view the room without impeding the operation," and the city wrote in its court appeal that representatives from both parties could "see the entire set up" in detail.

The same day Cruz spoke to Hannity, a Trump campaign lawyer told a federal judge in court that the campaign had several representatives in the room, according to news reports.

In an effort to halt the vote count, the Trump campaign cited testimony from one observer who said he could not tell whether there were any errant markings on ballot secrecy envelopes. But a judge denied the bid and suggested an agreement be reached for the number of observers.

Pennsylvania commonwealth law allows election observers. Feeley noted that Act 77, the law that established mail-in voting and allows observers to be present when mail ballots are opened and recorded, was passed by a Republican legislature.

"Any laws around poll watchers apply equally to both major parties and any third parties," said Suzanne Almeida, interim executive director of Common Cause Pennsylvania. "I have seen no evidence that one party’s poll watchers have been treated any differently than the other."

The city’s livestream, which has been running since Election Day, also provides viewing access to the general public. Wired reported that watching the livestream closely "reveals almost every step of how a ballot becomes a vote."

Cruz’s office did not respond by deadline to a question asking for examples of Republican observers being kicked out of the convention center. In another Nov. 5 tweet, Cruz shared a video of a man accusing Philadelphia officials of preventing him from observing.

But Buzzfeed News reported that the man was not wrongfully prevented as Democrats were "defying the law," as Cruz claimed. He was removed for breaking the rules against filming.

"Security there asked him to stop, and he refused," Feeley said.

Feeley said he has been present for the ballot counting each day since the election, and that he knows of no other observer who was told to leave. "I’m staring at them now," Feeley said.

"Claims regarding election observers being wrongly removed from the convention center are demonstrably untrue," added Jane Roh, a spokesperson for the Philadelphia district attorney.

In an isolated mixup, one poll watcher was denied on Election Day from watching the voting process — not the ballot-counting process — but Feeley told PolitiFact at the time that the person was allowed in at another polling site and had been denied by mistake.

Cruz said Philadelphia is "clouding the vote counting in a shroud of darkness."

That’s not the case. A judge ruled to let election observers watch the count from closer up, but representatives from both parties have been allowed to observe the process all along. The counting is also being streamed live online.

This fact check is available at IFCN’s 2020 US Elections #Chatbot on WhatsApp. Click here, for more.

The Associated Press, "Poll watchers emerge as a flashpoint in battle over ballots," Nov. 6, 2020

Order in the Commonwealth Court of Pennsylvania, Nov. 5, 2020

Supreme Court of Pennsylvania, "Emergency Petition for Allowance of Appeal by Defendant the City of Philadelphia Board of Elections," Nov. 5, 2020

The New York Times, "The Trump team loses court cases in Georgia and Michigan, but gets a small win in Pennsylvania," Nov. 5, 2020

The Philadelphia Inquirer, "We fact-checked Trump’s claims of election fraud in Philadelphia and Pennsylvania," Nov. 5, 2020

Buzzfeed News, "Here's A Running List Of False And Misleading Information About The Election," Nov. 5, 2020

Wired, "Philly’s Ballot-Counting Livestream Is the Only Thing Worth Watching Today," Nov. 4, 2020