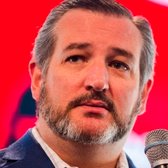 Ted Cruz is a U.S. Senator from Texas, first elected in 2012 and seeking a second term in 2018. Cruz also was a candidate for president of the United States in 2016. He is the former solicitor general for the state of Texas, previously serving as the director of the Office of Policy Planning at the Federal Trade Commission, an Associate Deputy Attorney General at the U.S. Department of Justice, and as a domestic policy advisor on the 2000 Bush-Cheney campaign, according to his campaign biography.