Facebook posts
stated on November 13, 2019 in a Facebook post:
Says President Trump donated his "second quarter salary to rebuild military cemeteries" and that the media ignored it and every other story of him donating his salary as POTUS.

As a candidate in 2016, billionaire businessman Donald Trump vowed he would not take the annual $400,000 presidential salary. So far, Trump has kept this promise, donating his POTUS paycheck in quarterly increments to various departments and agencies.

The National Park Service, National Institute on Alcohol Abuse and Alcoholism, and the Veterans Administration are among the entities that have benefited from a slice of Trump’s salary. One effort that hasn’t so far, despite a viral Facebook post’s claim, is the rebuilding of military cemeteries.

The post from ACT for America shows a photo of the president gripping roses and bending down to greet a child in a military uniform. Chunky text wrapping the photo says:

"President Trump donated his second quarter salary to rebuild military cemeteries. Media ignored this story, just like they did for every other salary he’s donated as POTUS." 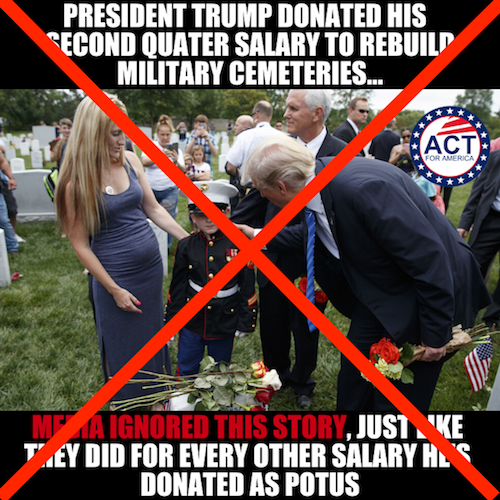 The president hasn’t donated any portion of his salary to rebuild military cemeteries. The specific second-quarter donations have gone to the Education Department, Small Business Administration, and Surgeon General’s office.

Also going against the post: Many media outlets have consistently reported the details of Trump’s salary donations — PolitiFact included. We update Trump’s promise to forgo the salary on the Trump-O-Meter, which tracks his campaign promises.

The photo of Trump with the child, by the way, is from Memorial Day in 2017 at Arlington National Cemetery.