Democratic presidential candidate Steve Bullock appears on CNN's "State of the Union" on May 19, 2019. (Screenshot)

Montana Gov. Steve Bullock -- a late entry into the Democratic race for the 2020 presidential nomination -- decried the withering of the American dream in a recent interview with CNN’s Jake Tapper.

"You look at today, only half the 30-year-olds are doing better than their parents were at age 30. When I was being raised, it was 90%," Bullock said in the May 19 interview.

Is that correct? Basically, yes.

The talking point is supported by a study on income published in 2016 and co-authored by six economists affiliated with the University of California-Berkeley, Harvard University, and Stanford University.

The paper calculated the fraction of children born between 1940 and 1984 who were earning more than their parents. The authors said their assessment was more complete than previous research because they were working with more detailed data that linked parents to their children.

Here’s a chart produced by the Brookings Institution showing the relevant data from the study: 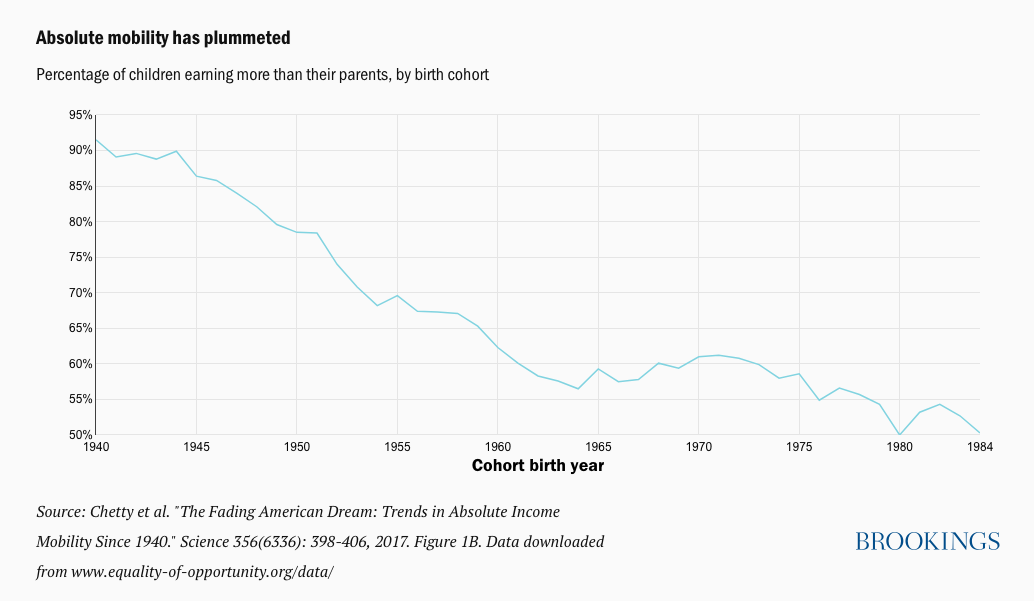 Is Bullock doing the math correctly?

At first glance, we thought Bullock had miscalculated.

But when we checked in with a co-author, Maximilian Hell of Stanford, he said that Bullock was actually on target.

The data in the paper, he said, referred to the point at which the children were 30 years old. This means that the 30-year-olds when Bullock was four years old in 1970 were themselves born in 1940, and 90% of that birth group out-earned their parents.

In other words, Bullock would have been right about the people who were 30 when he was born, but the 90% figure he offered would be too high to apply to those who were 30 year olds when he was a teenager (though even that percentage is still significantly higher than today’s 50%).

We’ll note that, according to the authors, improving today’s 50% figure would require more than just accelerated economic growth -- it would also require a lessening of income inequality.

Bullock said, "You look at today, only half the 30-year-olds are doing better than their parents were at age 30. When I was being raised, it was 90%."

The people who were 30 when Bullock was age 4 did indeed have a 90% likelihood of out-earning their parents. However, that number dropped by the time he was 18 to 68%. Still, even that smaller percentage was higher than today’s 50% figure.

In other words, economic mobility has decreased significantly since Bullock, 53, was a boy.

PolitiFact Rating:
Mostly True
"You look at today, only half the 30-year-olds are doing better than their parents were at age 30. When I was being raised, it was 90%."
Steve Bullock
Democratic presidential candidate
https://www.cnn.com/TRANSCRIPTS/1905/19/sotu.01.html

Brookings Institution, "Fewer Americans are making more than their parents did—especially if they grew up in the middle class," July 25, 2018

Email interview with Katherine Guyot, senior research assistant at the Brookings Institution’s Future of the Middle Class Initiative, May 20, 2019

Email interview with Maximilian Hell, sociologist at Stanford University, May 20, 2019

Email interview with Galia Slayen, spokeswoman for Steve Bullock, May 20, 2019