Donald Trump
stated on April 23, 2019 in a tweet:
"In the ‘old days’ if you were president and you had a good economy, you were basically immune from criticism."

During an hours-long tweetstorm, President Donald Trump complained that he wasn’t getting enough credit for presiding over a strong economy.

In an early morning tweet on April 23, Trump wrote, "In the ‘old days’ if you were President and you had a good economy, you were basically immune from criticism. Remember, ‘It’s the economy stupid.’ Today I have, as President, perhaps the greatest economy in history...and to the Mainstream Media, it means NOTHING. But it will!"

In the “old days” if you were President and you had a good economy, you were basically immune from criticism. Remember, “It’s the economy stupid.” Today I have, as President, perhaps the greatest economy in history...and to the Mainstream Media, it means NOTHING. But it will!

We wondered whether Trump was right that historically, "if you were President and you had a good economy, you were basically immune from criticism." (His mention of "It's the economy, stupid," was something Bill Clinton's 1992 presidential campaign team would say to remind themselves to stay on message.)

For starters, we’ll note that "criticism" of government leaders is virtually inevitable given the First Amendment, which protects "freedom of speech, or of the press; or the right of the people peaceably to assemble, and to petition the Government for a redress of grievances."

"Presidents have never been ‘immune’ to criticism, regardless of the economy," said Jeremi Suri, a historian at the University of Texas and its Lyndon B. Johnson School of Public Affairs. "From Washington to Trump, every president has faced serious criticism from domestic adversaries and various groups. That is as American as apple pie."

But even if you define the issue more broadly, Trump’s statement lacks evidence.

For a quick-and-dirty analysis, we looked at two statistics that measure the strength of the economy and public support for every post-World War II president: the unemployment rate, and the president’s approval rating from the polling firm Gallup. 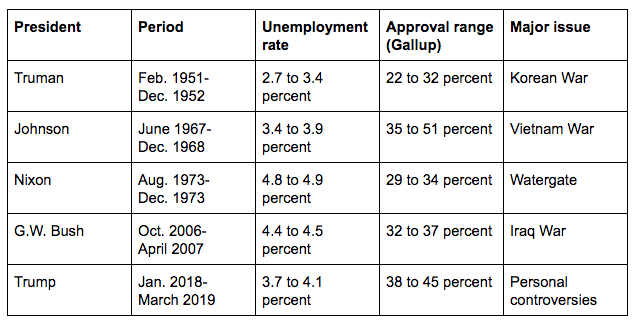 Truman’s strong-economy doldrums lasted for the better part of two years, Johnson’s for a year and a half, Nixon’s for a couple of months, and Bush’s for about six months.

What they all shared is a major issue other than the economy that sapped public support.

"If a president has a good economy, it gives them the chance to get a good approval rating -- but it’s not a guarantee," said Jeffrey A. Engel, director of the Southern Methodist University Center for Presidential History.

For Truman, Johnson and Bush, a war proved unpopular. For Nixon, it was Watergate.

"War, when it is protracted, tends to be a downer for presidential approval," said Bert A. Rockman, an emeritus political science professor at Purdue University. "All things being equal, a booming economy is a help to a president, unless they are caught up in conflicts that produce high numbers of casualties over a protracted period of time and that seem to be at an impasse."

Johnson faced problems beyond the Vietnam War. "I think he could have survived the war if not for race riots and assassinations," Engel said. "It wasn’t just one thing. It was the multiplicity of them."

Johnson and Bill Clinton "were presidents during two of the best economic periods in post-war U.S. history, but both faced intensive criticism from Republicans and some Democrats," Suri said. "The Republicans impeached Clinton at a moment of very low unemployment, strong economic growth, and even a budget surplus." (Clinton’s approval rating on the eve of his impeachment vote in the House was 63 percent.)

Low unemployment rates don’t guarantee that everyone will be happy with the economy, either, Suri added.

"There is also the question of who benefits from good economic numbers," he said. "Growing inequality, despite low unemployment, has been a source of criticism for all presidents since at least Nixon."

The White House did not respond to an inquiry.

Trump said, "In the ‘old days’ if you were President and you had a good economy, you were basically immune from criticism."

Even setting aside the constitutionally protected right of Americans to petition the government with their grievances, Trump lacks basic evidence for his assertion. At least four prior presidents served during good economic times yet had approval ratings lower than Trump’s are currently, usually because of wars or scandal.

PolitiFact Rating:
Pants on Fire
"In the ‘old days’ if you were president and you had a good economy, you were basically immune from criticism."
Donald Trump
President
https://twitter.com/realDonaldTrump/status/1120635200327831552?s=03

Text of the First Amendment

Email interview with Jeremi Suri, historian at the University of Texas and its Lyndon B. Johnson School of Public Affairs, April 23, 2019

Interview with Jeffrey A. Engel, director of the Southern Methodist University Center for Presidential History, April 23, 2019