Donald Trump
stated on September 6, 2018 in a rally in Billings, Mont.:
"When Abraham Lincoln made the Gettysburg Address speech, the great speech, do you know he was ridiculed? He was ridiculed."

Few people would have had "Gettysburg Address" on their bingo card for President Donald Trump’s Sept. 6 rally in Billings, Mont. But Trump did riff on the famous mid-Civil War speech by President Abraham Lincoln.

The 273-word address, memorized by countless schoolchildren, was delivered for the dedication of the National Cemetery of Gettysburg in Pennsylvania, at the site of a bloody but pivotal battle in the Civil War.

Here’s what Trump said at the rally:

"You know, when Abraham Lincoln made the Gettysburg Address speech, the great speech, do you know he was ridiculed? He was ridiculed.

"Fifty years after his death, they said it may have been the greatest speech ever made in America."

Some portions of Trump’s description are inaccurate (the president rode the train to Gettysburg rather than taking a horse and carriage) while others are fairly accurate (he is generally believed to have written a large portion of the speech at the White House before completing it and making revisions after his arrival in Gettysburg).

The part that raised our eyebrows is the notion that Lincoln, despite being lionized for his words in subsequent generations, was "ridiculed" for the address at the time.

Trump has a point, but the speech’s reception is more complicated than he lets on.

Trump may have been thinking of the example of the Harrisburg Patriot & Union, which attracted national attention in in 2013, as the 150th anniversary of the address approached.

The paper, located less than an hour away from the battlefield, wrote a scathing account of the speech. About Lincoln’s portion, the newspaper opined, "We pass over the silly remarks of the President. For the credit of the nation we are willing that the veil of oblivion shall be dropped over them and that they shall be no more repeated or thought of."

A century and a half later, the newspaper's take officially changed.

The Harrisburg Patriot-News and pennlive.com, under the leadership of editorial page editors John L. Micek and Matthew Zencey, ‘fessed up to the paper’s past editorial misstep in a 2013 fashion modeled on Lincoln’s original address:

"Seven score and ten years ago, the forefathers of this media institution brought forth to its audience a judgment so flawed, so tainted by hubris, so lacking in the perspective history would bring, that it cannot remain unaddressed in our archives. … No mere utterance, then or now, could do justice to the soaring heights of language Mr. Lincoln reached that day. By today's words alone, we cannot exalt, we cannot hallow, we cannot venerate this sacred text, for a grateful nation long ago came to view those words with reverence, without guidance from this chagrined member of the mainstream media. ... The Patriot-News regrets the error." 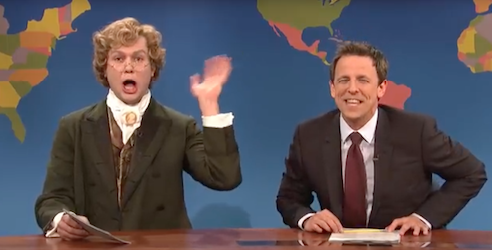 So one particularly high-profile case backs up evidence for Trump’s remarks in Montana.

Was this a common occurrence?

The Harrisburg Patriot-News’ negative reaction was not isolated, but it was not unanimous.

The poet and historian Carl Sandburg wrote in 1954 that "the American correspondent of the London Times wrote that 'the ceremony was rendered ludicrous by some of the sallies of that poor President Lincoln. ... Anything more dull and commonplace it would not be easy to produce.'"

And the Chicago Times wrote, "The cheeks of every American must tingle with shame as he reads the silly, flat, and dishwatery utterances."

But others offered high praise indeed.

The Chicago Tribune wrote, "The dedicatory remarks by President Lincoln will live among the annals of man."

Sandburg reported that the Philadelphia Evening Bulletin wrote that "not many" who read Lincoln’s speech "will do it without a moistening of the eye and a swelling of the heart." And the Providence Journal added, "We know not where to look for a more admirable speech than the brief one which the president made."

The key determinant of a newspaper’s positive or a negative review? Politics, historians say.

Lincoln was a Republican.

"The Patriot was a Democratic organ dedicated to the defeat of Republicans," said William Blair, a Penn State University historian and author of With Malice toward Some: Treason and Loyalty in the Civil War Era. "The Democrats were being increasingly dominated by a peace faction that was calling for an armistice of an indistinct nature but with the possibility of bargaining with the South for reunification while preserving slavery. The Democrats increasingly criticized Republicans for a seeming willingness -- in their eyes -- to waste more and more white lives for the ending of slavery while refusing to consider negotiating to end the war."

In other words, Blair said, what seems to modern ears like an apolitical speech appealing to universal values was actually seen at the time as a statement of policy -- in favor of continuing the war, and seeking emancipation.

"It was a brilliant speech that pressed forward two important policy measures without seeming to do so," Blair said. "The Patriot’s response was to an extent predictable. Republican newspapers were very supportive" of Lincoln’s speech in the immediate aftermath.

Trump does have a point about the address' changing assessment over time, said Eric Foner, a Columbia University historian who specializes in slavery and the Civil War.

"The speech definitely was seen as iconic 50 years later but not at the time," Foner said. "A few (newspapers) recognized that this one was really special. But generally, in 1863 Lincoln was much more revered for the Emancipation Proclamation than the Gettysburg Address."

Trump said, "When Abraham Lincoln made the Gettysburg Address speech, the great speech, do you know he was ridiculed? He was ridiculed."

Lincoln was definitely ridiculed by some newspapers, primarily on the basis of politics. Those sympathetic to Democrats and the South blasted it for seeming to support a continuation of the war and the goal of emancipation.

It's worth noting that other newspapers -- those whose sentiments aligned with the Union -- lavished the address with praise.

The statement is accurate but requires additional information, so we rate it Mostly True.

PolitiFact Rating:
Mostly True
"When Abraham Lincoln made the Gettysburg Address speech, the great speech, do you know he was ridiculed? He was ridiculed."
Donald Trump
President
https://www.c-span.org/video/?451002-1/president-trump-holds-rally-billings-montana

PennLive.com, "President Trump, we're the 'fake news' that panned the Gettysburg Address. But we apologized," Sept. 7, 2018

Email interview with William Blair, Penn State University historian and author of With Malice toward Some: Treason and Loyalty in the Civil War Era, Sept. 7, 2018