Nicholas Burns
stated on July 11, 2018 in comments on MSNBC's "Morning Joe":
European allies "pay us $2.5 billion a year to keep our forces there. It would cost us more money to bring the troops home than to keep them in Europe."

President Donald Trump criticized fellow NATO members during a summit on July 11, saying they had spent too little on defense and in support of the alliance. But NATO backers lined up to push back against Trump’s criticisms.

The United States maintains approximately 35,000 military personnel in Germany, 12,000 in Italy, 8,000 in the United Kingdom, plus smaller numbers in other European countries. The combined personnel levels in Europe fell after the end of the Cold War, but growing tensions with Russia in recent years have led to some refortification. Despite this, Trump has expressed skepticism about the scale of the U.S. troop presence in Europe, leading the Pentagon to study possible options for relocating or reducing the U.S. footprint on the continent, the Washington Post has reported.

One commentator who appeared on MSNBC’s Morning Joe was Nicholas Burns, a Harvard University professor who served for almost three decades as a foreign-service officer, including a stint as undersecretary of state for political affairs from 2005 to 2008. Burns said Trump was "misrepresenting the facts" about NATO and spending by U.S. allies.

The United States’ European allies, Burns said, "pay us $2.5 billion a year to keep our forces there. It would cost us more money to bring the troops home than to keep them in Europe." 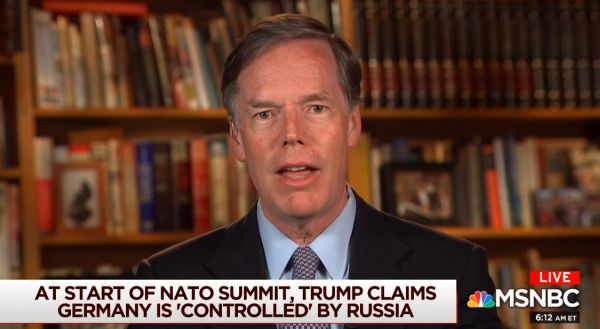 When we looked into Burns’ statistic, we found it was more complicated than it would seem.

Burns told PolitiFact that he had obtained the figure from National Security Action, a newly created advocacy group founded predominantly by Democratic foreign policy specialists. The group tweeted an infographic that offered that number.

A spokesman for the group, Ned Price, told PolitiFact that the number came from a New York Times article that said, "Allies cover 34 percent of the United States’ basing costs, worth $2.5 billion annually."

This echoed a number we had found in the most comprehensive recent analysis of this topic -- a study the RAND Corp. released in 2013. The study found that the NATO allies’ combined support for U.S. military activities on their soil was more than $2.48 billion in 2002 dollars, or essentially $2.5 billion.

The data is 16 years old and was initially calculated as part of a series of reports that the Pentagon published, but stopped producing in 2004.

The $2.5 billion figure "is the best we can say today," said Patrick Mills, a RAND senior operations researcher who helped produce the report. "Publicly available burden-sharing data for NATO allies was very difficult to come by in the writing of that 2013 report, and it still is."

FIrst, 97 percent of the $2.5 billion in NATO support came from what are called indirect costs -- things like rent and foregone taxes and customs duties. Such streams of support are important in evening out the books, but they are not reimbursements for outlays that the United States has made. Rather, they enable the United States to sidestep things they would have otherwise had to pay for, and they are harder to characterize numerically.

And second, NATO member support covers only about one-third of the U.S. military costs. The U.S. still pays two-thirds of the burden.

Indeed, in 2002, NATO’s rate of support was lower than that of other nations that host U.S. troops. According to the RAND report, NATO’s 34 percent share was well below the share picked up by Japan (75 percent), Kuwait (58 percent), Qatar (61 percent), and Saudi Arabia (65 percent), and was modestly below the level in South Korea (40 percent).

Price, of National Security Action, said the cautionary factors we offered were reasonable. "There will always be caveats when it comes to these sorts of issues." he said. That said, he added, "there’s nothing to suggest the burden-sharing balance has changed."

Would it cost more to bring the troops home?

Experts said this assertion is plausible but hard to either prove or disprove.

On the one hand, the RAND report concluded that overseas bases cost more than domestic bases do, partly because costs of living for military personnel are higher in other countries. However, moving to all-domestic bases isn’t a guaranteed cost-saver, because there would be additional costs to travel to the battlefield if troops are stationed further away.

Whether a move back home would save or cost money could also depend on how many existing facilities in the United States can be repurposed rather than built from scratch.

Harder to put a price tag on -- but vitally important -- are strategic issues surrounding a move. "If you think forces overseas have deterrent value, bringing the forces home could make wars more frequent," Mills said.

The many possible parameters for making the comparison Burns suggested further complicate the matter, said Lance Janda, a military historian at Cameron University.

"Is it just the Army, or is it the Air Force and Navy too?" Janda said. "Would we lose refueling and basing rights? Would that force us to pay for those services options in other countries? The ‘what ifs’ in all of this are insane."

Burns said European allies "pay us $2.5 billion a year to keep our forces there. It would cost us more money to bring the troops home than to keep them in Europe."

The $2.5 billion figure is the most recent estimate -- but the data is 16 years old. It mostly encompasses hard-to-calculate "indirect costs," and it only covers about one-third of U.S. military expenditures in Europe.

Meanwhile, experts said it’s conceivable that it would be more expensive to close up shop in Europe and bring troops back to the United States, but there are many variables surrounding that decision and it’s difficult to factor in the intangible strategic losses from giving up a European footprint. Ultimately, Burns’ assumption is speculative.

PolitiFact Rating:
Half True
European allies "pay us $2.5 billion a year to keep our forces there. It would cost us more money to bring the troops home than to keep them in Europe."
Nicholas Burns
Former career diplomat
https://www.nbcnews.com/politics/first-read/nato-summit-trump-again-alienates-allies-compliments-enemies-n890501

Email interview with Jeff Rathke, senior fellow and deputy director of the Europe program at the Center for Strategic and International Studies, July 11, 2018

Email interview with Garret Martin, a lecturer in the School of International Service at American University, July 11, 2018