Bill Cassidy
stated on September 20, 2017 in an interview on CNN:
Under the Graham-Cassidy health insurance bill, in "states like Maine, Virginia, Florida, Missouri, there will be billions more dollars to provide health insurance coverage for those in those states who have been passed by by Obamacare."

Following a sharp rebuke by late-night talk show host Jimmy Kimmel, Sen. Bill Cassidy, R-La., hit the airwaves on Sept. 20 to defend his bill that would undo much of the Affordable Care Act.

The bill, which Cassidy proposed with Sen. Lindsey Graham, R-S.C., was approaching Senate floor consideration when Kimmel took aim at the bill’s impact on some Americans’ ability to secure health insurance.

Under the Graham-Cassidy bill, Cassidy said, "More people will have coverage, and we protect those with pre-existing conditions. (In) states like Maine, Virginia, Florida, Missouri, there will be billions more dollars to provide health insurance coverage for those in those states who have been passed by by Obamacare."

We decided to take a closer look at the way Cassidy described the potential impact of his bill. We found that, according to the best available analysis, Cassidy is not fully accurate about the funding increase.

How would Graham-Cassidy affect the states?

The bill would establish a new "block grant" program for states, taking the place of funding currently provided under the Affordable Care Act.

The current funding under the ACA is primarily in the form of subsidies for people who purchase plans on the ACA’s online marketplace, as well as an expansion of access to Medicaid.

The bill’s approach holds the potential for state-level cuts in two ways.

First, a block grant is a fixed amount of money, rather than a formula-based entitlement that continues paying even as the number of qualifying beneficiaries rises. So states might have to do more with less.

Second, the bill does not authorize funding for the block grant beyond 2026. While Congress could choose to continue the funding at that point, there is no guarantee that it will. So that leaves a so-called fiscal "cliff" after which funding falls to zero, at least temporarily.

In "states like Maine, Virginia, Florida, Missouri, there will be billions more dollars" under Graham-Cassidy

Because the bill would enshrine complex formulas to determine the size of each state’s block grant, individual states would see differently sized block grants.

Generally speaking, the formula is more generous to states that chose not to expand Medicaid under the Affordable Care Act (most of which are Republican-leaning). By contrast, the states that did expand Medicaid (many of them Democratic-leaning) would tend to do less well under Graham-Cassidy, based on various analyses. And if nothing is done to extend funding beyond 2026, all states would feel the pinch.

We would ordinarily turn to the independent Congressional Budget Office to assess this part of Cassidy’s statement like this, but the CBO has said that, given the Republican leadership’s rush to get the Graham-Cassidy bill to the floor, it will be unable to do a full analysis of the bill before the planned vote. (Senate Republicans’ ability to pass the measure with just 51 votes expires at the end of September, which is widely considered the reason for the rush.)

However, on Sept. 20, an outside consulting group, Avalere Health, released an analysis it had conducted of the bill’s potential impact on the 50 states.

Overall, the report concluded that the Graham-Cassidy bill "would significantly reduce funding to states over the long term, particularly for states that have already expanded Medicaid," Caroline Pearson, Avalere’s senior vice president, wrote. It did find that in 16 states, funding would increase, at least as long as the block grants were funded. (The Washington Post’s Philip Bump noted that 15 of these 16 states with an increase voted for Donald Trump.)

As it happens, the four states Cassidy mentioned don’t fare that well in Avalere’s analysis, even though all four decided against accepting the Affordable Care Act’s Medicaid expansion, which should have been an indicator of a relatively benign funding outcome under the law. (In Florida's case, signups on the law's online marketplace have been widespread even as efforts to accept the Medicaid expansion have foundered.) 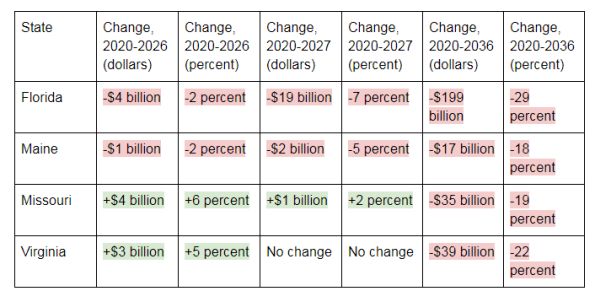 As the chart shows, Florida and Maine would both suffer declines in the billions of dollars during all three periods studied.

Virginia and Missouri, for their part, would either gain or hold steady through 2027, but would then see roughly 20 percent declines through 2036.

If these projections are to be believed -- and it’s worth emphasizing that they are only projections by one policy group -- then the four states Cassidy cited would not necessarily see "billions more dollars to provide health insurance coverage" under the Graham-Cassidy bill over the long term. And Florida and Maine in particular would see only decreases.

Some viewers will take this comment by Cassidy as simply explaining the reality that Obamacare isn't reaching enough people in these states. Others will note that this reality has more to do with Republican opposition in the states than with the law itself.

The Affordable Care Act did in fact provide insurance marketplaces to residents of all 50 states through its federal website -- almost 2.5 million people in Cassidy’s four states alone.

So, if Cassidy is trying to say that Obamacare is at fault for having "passed by" these states, he has it backwards. The Affordable Care Act sought to expand Medicaid in every state. In those states where it didn’t occur, it was because the state affirmatively chose not to accept the offer.

"Those states were not passed by" by the law itself, said Linda Blumberg, a health policy specialist at the Urban Institute.

Cassidy said that under his bill, in "states like Maine, Virginia, Florida, Missouri, there will be billions more dollars to provide health insurance coverage for those in those states who have been passed by by Obamacare."

Two of those four states will see a temporary bump in funding before settling in for a longer-term decline, according to the Avalere study. But the other two states won’t ever see a funding increase under the bill, according to Avalere. Cassidy also glosses over the fact that these states chose to ignore the law’s offerings on their own. We rate the statement Mostly False.

PolitiFact Rating:
Mostly False
an interview on CNN
Under the Graham-Cassidy health insurance bill, in "states like Maine, Virginia, Florida, Missouri, there will be billions more dollars to provide health insurance coverage for those in those states who have been passed by by Obamacare."
Bill Cassidy
U.S. Senator, R-La.

Kaiser Family Foundation, "Status of State Action on the Medicaid Expansion Decision," as of Jan. 1, 2017