John Moorlach
stated on August 4, 2017 in an op-ed:
"Crime has been getting worse since Jerry Brown was elected governor."

The Orange County lawmaker took his criticism a step further in a recent op-ed in which he predicted the gas tax hike, combined with California’s cap-and-trade extension, would boost gas prices so much that thieves would start siphoning fuel from cars.

Moorlach went on to declare that crime has been on the rise under Brown.

"Crime has been getting worse since Jerry Brown was elected governor," Moorlach wrote in the Aug. 4 piece in the Sacramento Bee. "The Bee reported, three-quarters of California’s largest cities saw violent crime rise in 2015, with Sacramento’s up 25 percent."

There’s been some truth in those claims, but those who made them also ignored key context or distorted the facts.

We wondered how Moorlach’s statement, specifically the portion about crime getting worse since Brown was elected, stacked up.

Before diving into the senator’s claim, here’s some background on California crime trends.

Like the rest of the United States, California has experienced a dramatic long-term reduction in crime over the past several decades.

Between 1980 and 2015, the state’s overall crime rate declined by about 60 percent, according to the nonpartisan Legislative Analyst’s Office. 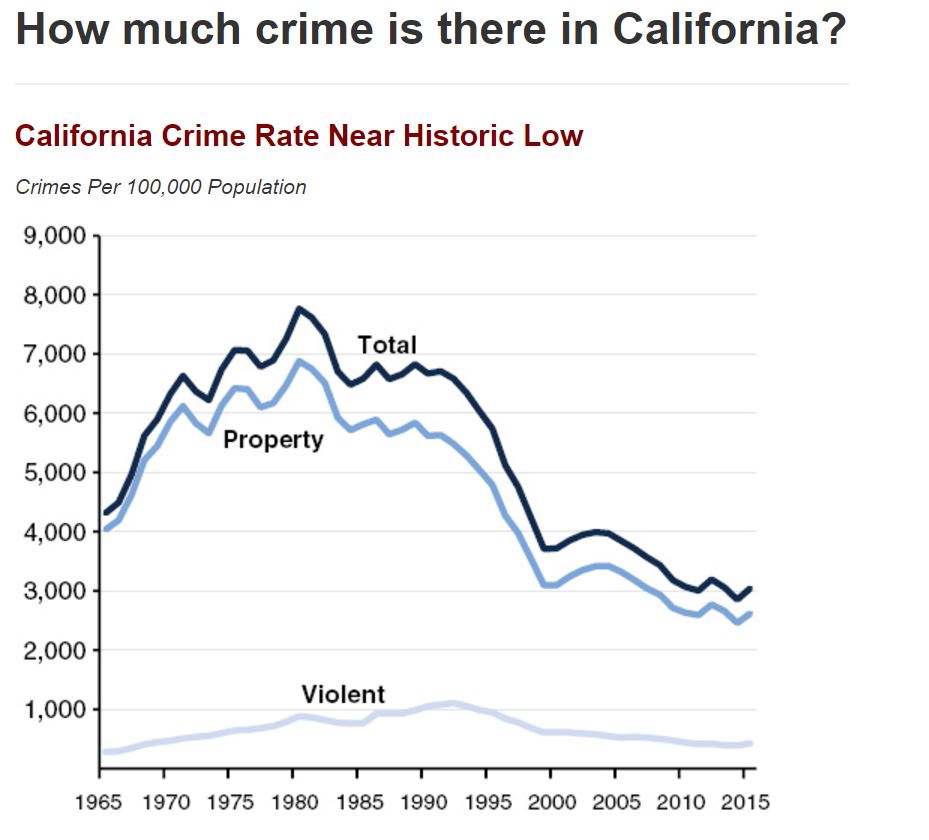 The property crime rate peaked in California at nearly 7,000 crimes per 100,000 population in the early 1980s. Three decades later, it had dropped by more than half.

The violent crime rate saw a similar dramatic drop during this period.

In his op-ed, Moorlach focuses on crime "since Jerry Brown was elected governor."

We took that to mean Brown’s current stretch as governor, which started with his election to a third term in 2010 and continued with re-election to a fourth term in 2014.

For this current stretch, we looked at crime data from 2010 through 2016, the most current year available. We also considered the period 2010 through 2015 because Moorlach’s spokesman said the senator did not have had access to a California Department of Justice report on crime for 2016, given that it was released two weeks after his op-ed published.

No matter the exact years selected, California’s crime story during over the past half decade is not as simple as Moorlach’s statement implies.

The statewide crime rate, which measures both violent and property crimes, ticked up in 2012 and 2015. It decreased, however, in the other four years during Brown’s current stint.

Jonathan Peterson, a fiscal and policy analyst at the California Legislative Analyst’s Office, cautioned that year-over-year changes can make it look like crime is growing rapidly, "but it could be a blip."

Peterson said the past six to seven years have been marked by fluctuations in California’s crime rate, not a steady increase or decrease.

"One has to be very cautious about politicians making statements about crime because they will often try to make the numbers say something that isn’t quite representative," said Donohue. "The broad trend for the last 25 years has been down and very benign. Crime is at a much lower level in practically every place today than it was 25 years ago. But in the last couple years there has been an uptick (in California and nationwide), and that’s a reason for concern."

To fact-check Moorlach’s claim about crime getting worse, we examined statistics from the California Department of Justice’s recent report Crime in California 2016. It includes crime rate data from 1966 through 2016.

This casts doubt on Moorlach’s claim that crime has been getting worse.

Sen. Moorlach’s spokesman provided us with links to about a half-dozen news articles that detailed crime increases across California. None of the articles, however, showed a sustained increase from 2010 through 2016.

In recent months, politicians such as Assemblyman Allen have pointed to this period as evidence for growing crime concern in California.

Many have cited a PPIC analysis comparing the first half of 2014 to the same period in 2015. It found widespread increases in crime rates in California cities with a population greater than 100,000. Of the 66 California cities that size, 49 saw an increase in violent crime and 48 experienced increases in property crime. Many saw double digit percent increases.

A subsequent report comparing the first half of 2016 with the first half of 2015 showed overall crime decreasing, driven by a drop in property crimes. That report was published by the Center on Juvenile and Criminal Justice, a policy research group that makes recommendations on alternatives to incarceration.

That report showed a slight decrease in the total crime rate, driven by a nearly 3 percent decline in the property crime rate. Violent crime, meanwhile, increased about 4 percent in 2016. We won’t use these statistics as a determining factor in our rating for Moorlach’s claim since his spokesman said the senator didn’t have the report.

The 2016 data, however, appear to support the idea that crime has not followed a consistent pattern in California over the past half dozen years.

His spokesman pointed to news articles that cite an uptick in crime in 2015, when many large cities in California saw double-digit increases in violent crime. But neither those articles nor state crime reports show a sustained increase from the time of Brown was elected governor in 2010 through the current period.

In fact, there was a slight decrease in the state’s overall crime rate from 2010 through 2015, the most recent year Moorlach was likely referring to.

Crime researchers emphasized that California and the nation have experienced a dramatic decrease in crime in recent decades. They say California’s crime rate increases in 2012 and in 2015, however, are reason for concern but are not evidence that crime has gotten worse over the past half dozen years.

After our fact-check published, Sen. Moorlach responded by saying crime has increased in California under Gov. Jerry Brown if one looks at a more narrow period, from 2011 through 2015.

We used 2010 as a baseline for our research given that Moorlach’s original statement said "crime has been getting worse since Jerry Brown was elected governor."

Voters elected Brown governor in November 2010 and he took office in January 2011.

Using 2010 as a baseline both adhered to Moorlach’s original timeframe and gave us a chance to examine how the crime rate had changed under Brown compared with the year immediately preceding his governorship.

Moorlach correctly points out on Twitter that: "Your own report admits crime increased from 2011-2015, a very large period of Gov. Brown's time in office." He also emphasized this point in a blog post on Medium.com.

As we pointed out in the fact check, the crime rate has fluctuated during Brown’s tenure. It increased in 2012 and again in 2015, provoking concern from politicians and those who research crime trends. The other four years under Brown, however, the crime rate has decreased.

In the end, when one measures the overall crime rate from 2010 through 2015 and through 2016, both fuller pictures of Brown’s time in office, there’s a slight decrease.

Our rating remains the same.

Sen. John Moorlach, op-ed, The Sacramento Bee, "Why you should buy a locking gasoline cap," August 4, 2017

California Legislative Analyst’s Office, How much crime is there in California? December 2016, accessed August 201