Scott Peters
stated on April 24, 2017 in a news article:
The estimated price of President Trump’s border wall is the same as the cost of "one and a half aircraft carriers."

In this photo provided by the U.S. Navy, the USS Gerald R. Ford embarked on the first of its sea trials to test various state-of-the-art systems on its own power for the first time Saturday, April 8, 2017, from Newport News, Va.

The debate over President Trump’s proposed border wall intensified this week, with opponents saying the barrier would be ineffective and a costly mistake.

Building "a big, beautiful wall" on the Southern border was Trump’s signature promise during his campaign, winning him support from advocates for hard-line immigration reform.

But when Trump initially demanded funding for the wall be included in a stop-gap budget measure needed to avoid a government shutdown, opponents in Congress balked.

Peters went on to make an eye-opening claim about what money for the wall could fund instead:

"We’ve checked in with The Navy; if we don’t pass the 2017 budget, they’re talking here about five ships that won’t be available to sail just out of the Western region — and 15 worldwide...the money for the wall? That’s, by the way, (the cost of) one and a half aircraft carriers," Peters was quoted as saying on April 24, 2017 in a Politico news article.

We know cost estimates for the wall are high. But would the price really equate to "one and a half aircraft carriers"?

We set sail on a fact check.

Paying for a "big, beautiful wall"

The U.S. border with Mexico is nearly 2,000 miles long. It already includes about 650 miles of fencing constructed under previous administrations. Trump has said the wall doesn’t need to span the entire border, adding in a television interview that "We don’t need 2,000 (miles), we need 1,000 because we have natural barriers."

During his campaign, Trump initially said he could build a wall for $4 billion and later estimated $6 billion to $7 billion. In April 2017, he put it at $10 billion or less.

The Associated Press reported in March that the Trump Administration wants to build a 30-foot-high border wall that "looks good from the north side and is difficult to climb or cut through," according to a pair of contract notices posted to a government website. 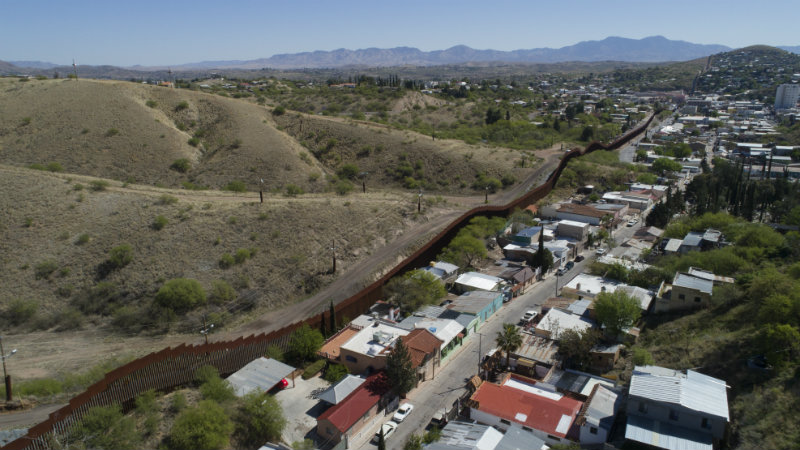 Cost estimates for the wall vary greatly. Here are some relevant estimates, as chronicled by news publication Quartz.

Peters’ spokesman Jacob Peters said the congressman used the $21.6 billion estimate because it "comes from the internal report done by the Department of Homeland Security."

"This estimate falls somewhere in the middle of the range of cost estimates," the spokesman added. "Because this report was commissioned by (Department of Homeland Security) Secretary Kelly, and is based on the Trump administration’s own planning process to build walls and fences to cover almost the entirety of the border that is not already fenced, it is the best current estimate for what President Trump is likely to ask Congress to appropriate to build his border wall."

We also used the $21.6 billion as our estimate.

Finding the cost of the latest U.S. aircraft carrier is a bit easier. Peters’ spokesman pointed to a Congressional Research Service report from April 2017 that places the cost of each new "Navy Ford Class Aircraft Carrier" at approximately $12.9 billion.

That’s up from the $8.5 billion cost of carriers in the Navy’s most-recent Nimitz class, according to a Navy fact sheet.

The first carrier in the new class, the USS Gerald R. Ford, is expected to be commissioned later in 2017. It’s been described as "the most expensive and most advanced warship ever built."

Still, when we do the math, it appears Peters slightly underestimated his comparison: Building a $21.6 billion border wall would cost about 1.67 times the price of these new warships.

Reaser told us the number "does appear to check out."

Democratic Congressman Scott Peters recently claimed the estimated price of President Trump’s border wall is the same as the cost of "one and a half aircraft carriers."

Peters used a $21.6 billion estimate, citing a leaked report from the Trump Administration’s Department of Homeland Security. That figure is within the $15 billion to $25 billion range produced by a private research firm.

Peters referenced the $12.9 billion price tag on the Navy’s newest class of aircraft carriers from a Congressional Research Service report.

At this early stage, no one knows how much Trump’s wall will really cost. Partisan sources have it all over the map. And delays and cost-overruns are common for large government projects: Just take a look at California’s massive high-speed rail initiative.

But Peters selected what appears to be the best initial estimate from Trump’s own homeland security analysts.

If anything, Peters slightly underestimates the 1.67 aircraft carriers the U.S. could build for the cost of Trump’s border wall.

Politifact Rating:
True
The estimated price of President Trump’s border wall is the same as the cost of "one and a half aircraft carriers."
Scott Peters
U.S. Congressman

Quartz, The many and varied cost estimates of Trump’s border wall, April 25, 2017

Bernstein Research, Bernstein Materials Blast: Who Would Profit from The Trump Wall?, July 15, 2016