Donald Trump
stated on October 10, 2016 in a rally in Ambridge, Pa.:
"We don't have any" chess grandmasters in the United States.

Did Donald Trump insult the U.S. chess community with recent comments in Pennsylvania?

More recently, during an Oct. 10 rally in Ambridge, Pa., Trump offered a variation on that theme -- and the U.S. chess community wasn’t happy about his remarks.

Trump was in the midst of criticizing international trade agreements, including the Trans-Pacific Partnership. He said he supports the idea of bilateral agreements, saying that such deals would make it possible for the United States to threaten to withdraw, then renegotiate on more favorable terms before the agreement expired.

Trump went on to say that with multilateral pacts like the TPP, "you can't terminate -- there's too many people, you go crazy. It's like you have to be a grand chess master. And we don't have any of them." (You can see it here, around the 19:45 mark.)

Trump’s statement sounded wrong to us. The Trump campaign did not respond to an inquiry, but as it turns out, it is wrong. In fact, the comment provoked anger and ridicule within the chess community, which knows that the United States is currently on a roll in international competition.

It’s literally wrong that "we don’t have any" chess grandmasters. That’s the correct term, by the way, not "grand chess masters."

Currently, the United States has 90 grandmasters, counting both men and women, which is enough to rank third-highest in the world. The title is awarded by FIDE, the international governing body of chess; it’s the highest rank conferred by the group, and it is given for life.

Russia, a longtime chess powerhouse, ranks first with 234 grandmasters, while Germany ranks second with 91, just one more than the United States. Here’s a list of the top 30 nations in the FIDE rankings. 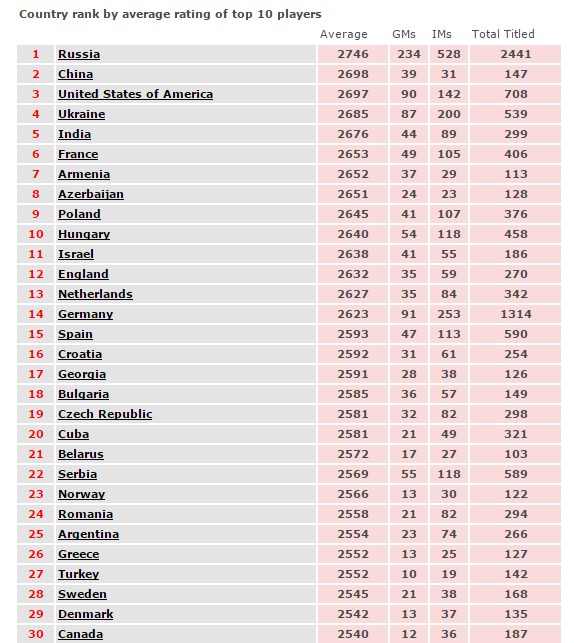 In the meantime, Trump chose a particularly inopportune moment for his comment.

Most notable is the victory less than a month earlier by the U.S. men’s team at the 42nd Chess Olympiad in Baku, Azerbaijan -- which is considered the first time in nearly 80 years that the United States won the gold. To win in September, the United States bested such powerhouses as Russia, Ukraine, India and China.

Chess may not be the most popular sport in the United States, but observers called the Olympic victory a watershed moment for U.S. chess.

"The 2016 win in the Chess Olympiad is huge," said Olimpiu G. Urcan, a Singapore-based chess writer and historian. "The previous Olympiad was won by China, and Russia and Ukraine are extremely competitive. Having the United States finish first was a huge boost for chess in America and a moment of genuine pride. Many in the U.S. right now believe that the successes of 2016 could produce a rejuvenation of chess" similar to what happened with the international stardom of Bobby Fischer in the 1970s.

Macauley Peterson, a Hamburg, Germany-based American who serves as content director for chess24, calls it "frankly discouraging" that the United States team "received so little media attention. The number of U.S. grandmasters is higher than ever, and winning the Olympiad was a historic achievement."

Urcan was among the first to notice Trump’s quote and tweeted about it. That led to none other than Garry Kasparov -- probably the most famous living chess grandmaster -- to tweet his disbelief. Kasparov is Russian but is living in exile in New York City; he has been an outspoken critic of Russian leader Vladimir Putin.

Proud to see Trump knows as little about chess as everything else. Team USA just won gold at the chess Olympiad! https://t.co/k2Y3KBect3

Hikaru Nakamura, a U.S. Olympic team member and currently the world’s No. 7 ranked player,  joined in:

Wow. Just wow. What a disgrace on every level. https://t.co/aJY7haSslH

In the meantime, the United States is home to 15-year-old grandmaster Jeffrey Xiong, who in August won the World Junior Chess Championship -- the first U.S. victory in the tournament in nearly two decades.

And the United States is currently the only country to have three players in the world’s top 10 list -- Nakamura, Fabiano Caruana and Wesley So.

A final note: There is a long history of foreign players flocking to affiliate with the U.S. team. The victorious Olympic team includes Fabiano Caruana, a dual American and Italian citizen who had previously played for Italy, and Wesley So, who was born in the Philippines.

Trump said, "We don't have any" chess grandmasters in the United States. Actually, the United States has 90 grandmasters, the third most of any country, and the U.S. team recently won chess’ biggest international tournament for the first time in eight decades. We rate the statement Pants on Fire.