Just in time for Halloween, claims about what’s lurking in the COVID-19 vaccines are getting wilder and spookier.

There’s the "transhumanism nanotechnology" ingredient that will apparently turn all of us into copies of the Terminator. There’s also "graphene oxide," a material that some claimed will straight up kill you. Why didn’t Michael Myers think of that?

Rest assured, we’ve fact-checked this, and it’s all fake gore.

1. Aluminum that "will kill" the brain.

Aluminum. They use it in pickup trucks, food containers and antiperspirants. But in the COVID-19 vaccines? No.

The U.S. Centers for Disease Control and Prevention reports that small amounts of aluminum — specifically aluminum salts — have been used in vaccines since the 1930s as an adjuvant, which helps elicit a stronger immune response from the body.

But none of the three COVID-19 vaccines currently being used in the U.S. — Pfizer, Moderna and Johnson & Johnson, all of which have publicly accessible ingredient lists — contain any aluminum.

As for other vaccines, research has shown their levels of aluminum are so low that they can't easily be absorbed by the body, let alone the brain. There has been no evidence of the aluminum in vaccines causing illness or developmental disorders.

2. Nanoparticles that will help people "locate you" via 5G networks.

While your cell phone can help Big Brother, or your mother, locate you via 5G networks, the vaccines cannot.

Yet some social media users likened the bubbles of fat in the vaccine to the sort of tracking microchips implanted under a pet’s skin. That’s a lot of creepy nonsense.

There is no evidence that the COVID-19 vaccines contain technology similar to pet microchips. The lipid nanoparticles used in some of the vaccines are called "nanoparticles" because they are very, very small. They have nothing to do with 5G networks or tracking technology.

This baseless conspiracy theory says that the shots include a technology that changes "what it is to be human." The vaccines don’t contain any such thing.

"None of the vaccines contain nanotechnology of any sort, let alone 'transhumanism nanotechnology,’ which isn’t even a thing," Mark Lynas, a visiting fellow at the Alliance for Science and Cornell University, told PolitiFact.

"RNA" and the prefix "nano" are valid scientific terms, though. Here’s what they mean:

"RNA" — ribonucleic acid — is a molecule that carries coded genetic information to a cell and a messenger form of RNA is used in the Pfizer and Moderna vaccines to send information about the coronavirus to the body’s cells to teach the immune system to identify and prepare to fight off a COVID-19 infection. (Spoiler alert: It does not modify a person’s DNA or RNA.) The Johnson & Johnson vaccine uses a disabled adenovirus to deliver instructions to do the same.

"Nano," as we said earlier, is a term widely used to describe things that are very tiny, and scientists use the prefix more specifically to refer to things on the scale of individual atoms.

4. A "Trypanosoma Parasite" that is one of the causes of AIDS

A chilling, grainy black-and-white image being shared on social media has been described as a "Trypanosoma Parasite" purportedly observed in Pfizer’s COVID-19 vaccine. Several variants of the parasite, internet users claimed, are lethal and are one of many causes of acquired immune deficiency syndrome or AIDS.

This is erroneous, on all counts.

Dr. Bobbi Pritt, the director of clinical parasitology at the Mayo Clinic, told us the blurry image likely represents an out-of-focus non-cellular component of the vaccine and doesn’t show a Trypanosoma cruzi or any other parasite.

As for the claim that this particular parasite causes AIDS, that’s also wrong, she said.

"The only thing that causes AIDS is an infection with the human immunodeficiency virus," she said, "and this cannot be acquired through the Pfizer vaccine."

5. Living microorganisms that can "germinate to cause sickness" with "all sorts of uncontrollable byproducts."

A popular video claimed that the Pfizer vaccine contains "particles that could germinate and cause illness" — and that vitamin supplements could stop this from happening. You can bet someone is selling those supplements online.

There’s no truth to this one either. The ingredients for Pfizer vaccines are chemical components — not living organisms.

"Contamination with spores or other microbial material can theoretically happen during production of any biologic, including vaccines," said Volker Mai, associate professor in the epidemiology department at the University of Florida. "However, quality control is extensive and monitoring occurs continuously. Thus, it is highly unlikely that any contaminated batch would make it into the market."

6. Something that makes magnets stick to you

A vaccine turning you into the Marvel villain Magneto? That sounds terrifying (unless that’s what you wanted.) But don’t worry, the COVID-19 vaccines won’t make you more attractive to magnets.

Social media users have shared videos that appear to show magnets sticking to people’s arms where they say they were injected, and claimed this as proof the shots have microchips in them.

Al Edwards, an associate professor in biomedical technology at the University of Reading in England, told Newsweek that because vaccine’s ingredients are some of the same things that are in the human body, "there is simply no way that injecting a tiny fragment of this material" could make it respond to a magnet. "Most food is made of similar molecules, and eating food doesn’t make people magnetic," he said.

A similar claim cites a video showing what looks like small balls connecting and growing on their own. The disturbing clip was described as the COVID-19 vaccine’s reaction once it hits the bloodstream.

That’s wrong. The video was actually from a 2015 science experiment by the Stanford Complexity Group, an initiative to bring complexity science to a wider audience, that shows self-organizing wires, which is still weird.

One more time for the people in the back: None of the COVID-19 vaccines contain microchips or metals.

7. "Graphene oxide," which is "toxic to the human body and causes a number of problems."

An incendiary video that speaks of murder claims that Pfizer’s COVID-19 vaccine is dangerously packed with something called graphene oxide.

A Pfizer spokesperson told PolitiFact that while graphene oxide — a material made by the oxidation of graphite — is used in some vaccines, it is not used at Pfizer and is not in its COVID-19 vaccine. None of the listed ingredients is another name for graphene oxide, and the material doesn’t appear in ingredient lists for the Moderna and Johnson & Johnson vaccines.

The real, not so spooky ingredients

The real ingredients are much less likely to keep you up at night.

All three manufacturers of the approved vaccines in the U.S., Pfizer, Moderna and Johnson & Johnson, have shared their ingredients.

For Moderna and Pfizer, the active ingredient is messenger RNA, which carries genetic information about the coronavirus to the body's cells to help them recognize and produce antibodies against it. There’s no evidence that mRNA is dangerous, and scientists say the material is broken down by the body within days.

The lipids encase the mRNA, the salts help keep the pH, or acidity, of the vaccine close to that of a person’s body; and the sugar safeguards the lipids when they’re frozen and stops them from sticking together, according to MIT’s Technology Review, which spoke with experts to help decode the contents.

Before injection, the vaccine is mixed with the saline solution, just as many intravenously delivered medicines are, the report said.

Moderna’s ingredient list is very similar, and includes the lipids, salts and sugar, with a slight difference, including the solution for the injection, that may explain the different storage needs for each. 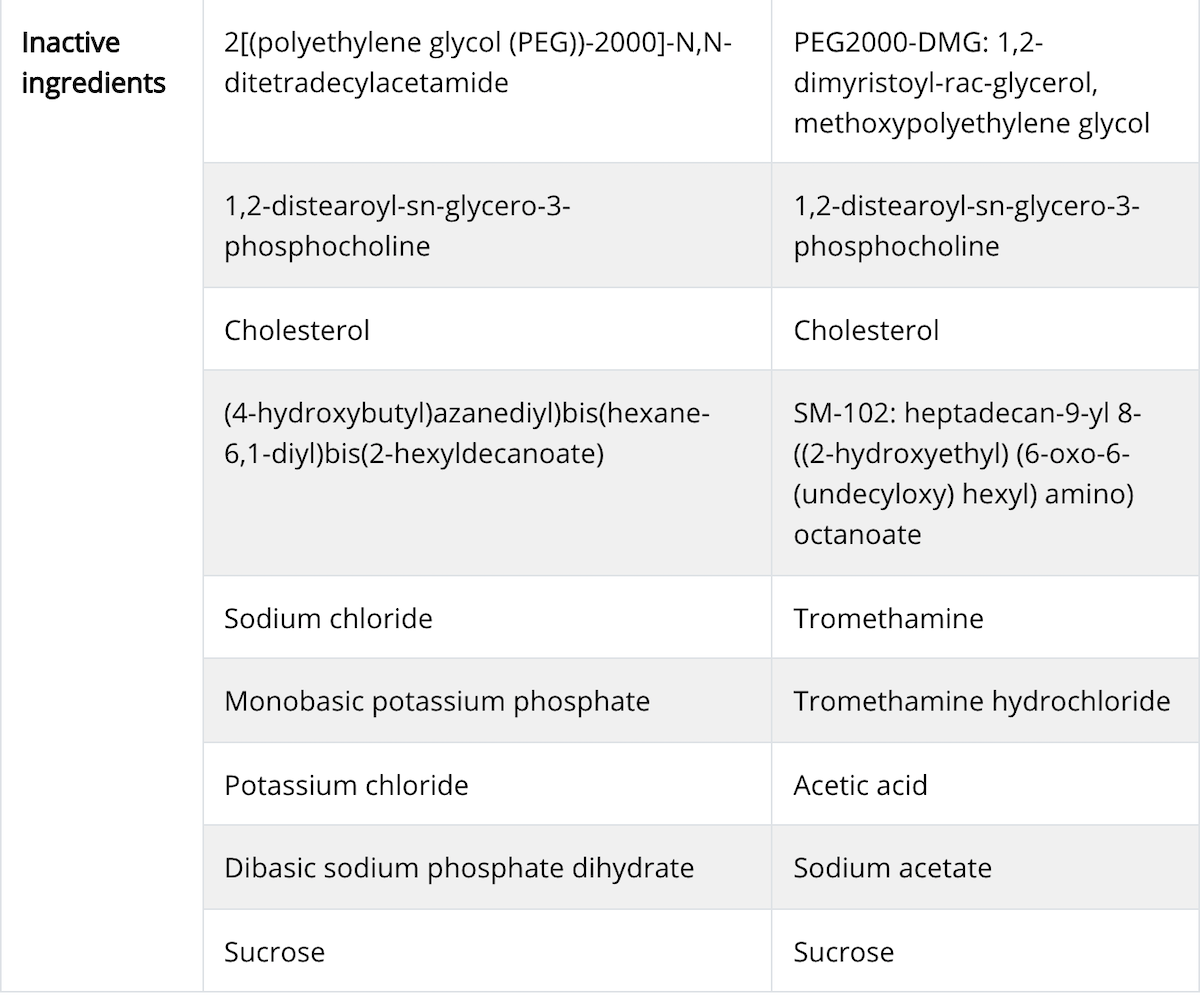 The Johnson & Johnson vaccine uses a disabled adenovirus, rather than mRNA, to deliver instructions to produce the coronavirus’ spike proteins and activate the immune system. The other ingredients are alcohol, citric acid, salts and sugars.

PolitiFact, No, COVID-19 vaccines do not contain nanoparticles that will allow you to be tracked via 5G networks, March 12, 2021

PolitiFact, No living organisms in the Pfizer vaccine, Oct. 15, 2021

PolitiFact, No, these magnet videos don’t prove the COVID-19 vaccines contain microchips, May 17, 2021

MIT Technology Review, What are the ingredients of Pfizer’s covid-19 vaccine?, Dec. 9, 2020