What the first police statement about George Floyd got wrong

A person reacts in front of a mural near Cup Foods after a guilty verdict was announced at the trial of former Minneapolis police officer Derek Chauvin for the 2020 murder of George Floyd, on April 20, 2021, in Minneapolis. (AP/Gash)

A jury convicted former Minneapolis police officer Derek Chauvin for the murder of George Floyd after taking in nearly three weeks of witness testimony and video footage of Floyd’s final moments under Chauvin’s knee. Even the police chief spoke out against Chauvin’s use of force.

But on the day that Floyd was killed, the Minneapolis Police Department told a much different story about the encounter that sparked a summer of protests over police brutality.

"Man Dies after Medical Incident During Police Interaction," said the May 25, 2020, statement.

According to the statement, officers responded because of a reported "forgery in progress" involving a suspect who "appeared to be under the influence."

"Two officers arrived and located the suspect, a male believed to be in his 40s, in his car," the statement said. "He was ordered to step from his car. After he got out, he physically resisted officers. Officers were able to get the suspect into handcuffs and noted he appeared to be suffering medical distress. Officers called for an ambulance. He was transported to Hennepin County Medical Center by ambulance where he died a short time later."

The statement never mentioned Chauvin’s use of force against Floyd, who pleaded that he couldn’t breathe as Chauvin pinned him by his neck to the pavement in handcuffs. "At no time were weapons of any type used by anyone involved in this incident," it said instead. 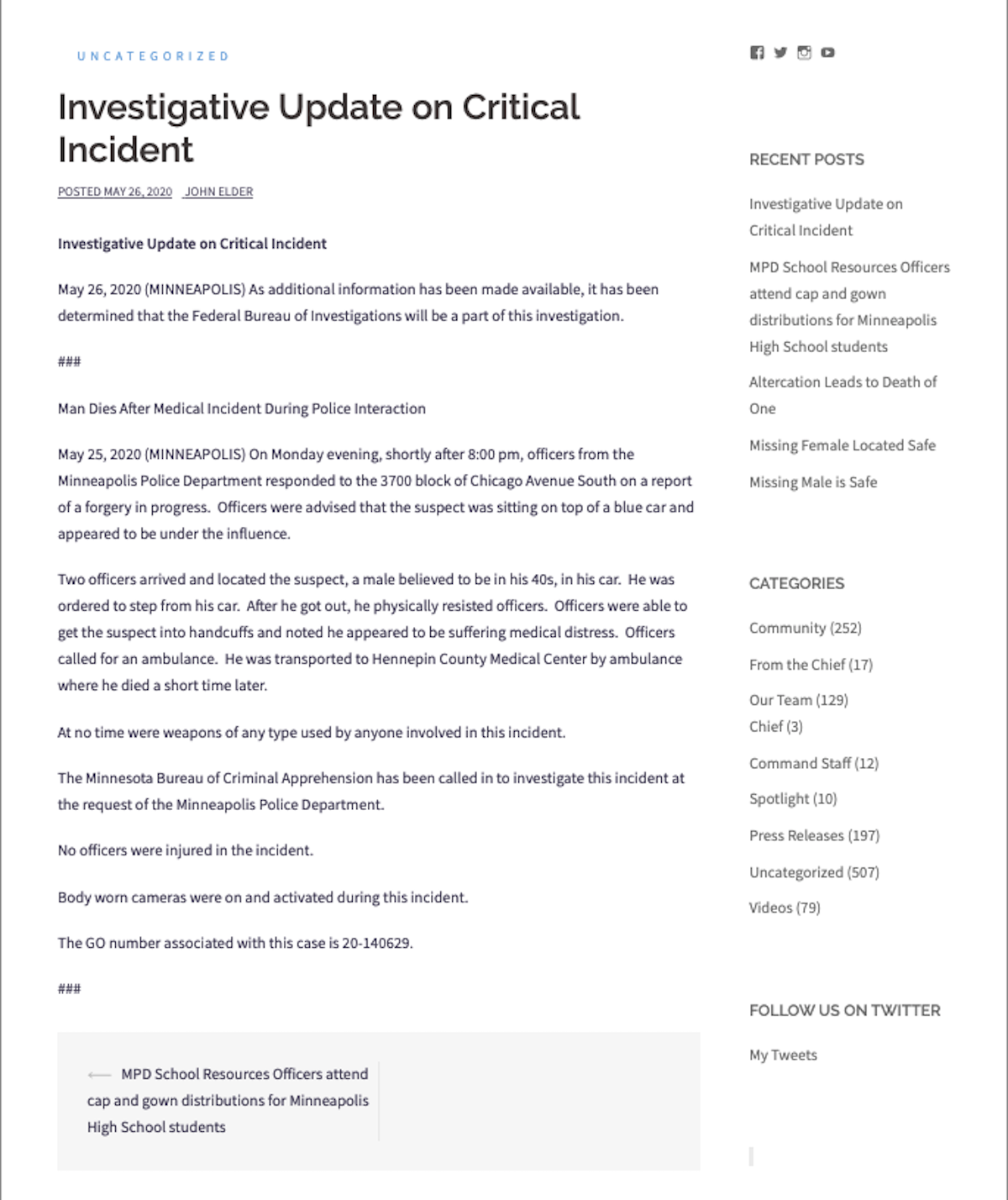 The police narrative was upended when a 17-year-old posted a video she captured of Chauvin kneeling on Floyd’s neck for 9 minutes and 29 seconds on Facebook.

But as police accounts go, this one was typical for its less-than-transparent jargon and tone.

"This is a classic use of the passive-voice ‘exonerative tense’ used too often by both the police and the press when describing police killing civilians," said Mark Osler, professor of law at the University of St. Thomas in Minnesota and a former federal prosecutor.

The police department spokesperson who wrote the alert later told the Los Angeles Times that he was relying on information from sergeants who work in the area and a log of communications between officers and dispatchers. The log did not include details on Chauvin’s use of force, and the spokesperson hadn’t yet reviewed the body-camera footage.

"This had literally zero intent to deceive or be dishonest or disingenuous," John Elder, the police department’s director of public information, told the Los Angeles Times. "Had we known that this (situation) was what we saw on the video, that statement would have been completely different."

Once the state took over the case, Elder said he could not make changes to the statement.

The statement’s account of Floyd’s visit to Cup Foods got some details right: Police were responding to a reported forgery after Floyd bought a pack of cigarettes with a suspected counterfeit $20 bill, and the employee who called the police told them that Floyd "appeared to be under the influence." The county’s autopsy report later found that Floyd had fentanyl and methamphetamine in his system when he died, though it determined Chauvin’s restraint was the main reason why Floyd’s heart stopped.

But what was omitted is glaring in retrospect. PolitiFact decided to fact-check how the original police statement stacks up against what is known about Floyd’s murder nearly a year later.

"After he got out (of the car), he physically resisted officers. Officers were able to get the suspect into handcuffs and noted he appeared to be suffering medical distress."

This account was misleading. It left out the fact that Chauvin continued to place his knee on Floyd’s neck even after he was handcuffed and lying prone on the ground with no resistance.

Members of the Minneapolis Police Department and use-of-force experts testified that Chauvin’s restraint of Floyd was excessive relative to Floyd’s level of resistance.

"Initially, when Mr. Floyd was being placed in the backseat of the vehicle, he was actively resisting your officers, so at that point the officers were justified in utilizing force to have him try to comply," said Sgt. Jody Stiger of the Los Angeles Police Department.

"However, once he was placed in the prone position on the ground, he slowly ceased his resistance and at that point the officers — or ex-officers, I should say — they should have slowed down or stopped their force," Stiger continued.

Minneapolis Police Chief Medaria Arradondo said once Floyd stopped resisting — and "clearly" once he was unresponsive — the force Chauvin applied was in violation of department policy.

Floyd had underlying medical conditions and had recently had COVID-19 before he died.

But several witnesses testified that Floyd’s "medical distress" was aggravated by Chauvin's refusal to take him out of the prone position. Inspector Katie Blackwell, who was formerly in charge of the department’s officer training, said officers are taught to remove handcuffed individuals from face-down positions that can restrict their breathing "as soon as possible."

Other medical experts called by the prosecution said Floyd died from a lack of oxygen, including forensic pathologist Dr. Lindsey Thomas, who testified that "there's no evidence to suggest he would have died that night except for the interactions with law enforcement."

"Officers called for an ambulance. He was transported to Hennepin County Medical Center by ambulance where he died a short time later."

The timing of Floyd’s death was addressed in the trial. It’s true that Floyd was pronounced dead in the emergency room by Dr. Bradford Langenfeld, who testified that he made the call after Floyd had been in cardiac arrest for more than an hour.

But Derek Smith, one of two paramedics who worked on Floyd in the ambulance, testified that he told his partner Floyd seemed dead when they arrived on scene.

"I thought he was dead," Smith said, noting that Floyd had no pulse.

The video of Floyd’s arrest shows him losing consciousness under Chauvin’s knee. Dr. Martin Tobin, a physician and professor of pulmonology and critical care Loyola University School of Medicine in Chicago, pinpointed for the jury the exact moment in the video where Floyd died.

"You can see he's conscious, you can see slight flickering, and then it disappears," Tobin said as a video played of Floyd’s eyes. "So one second he's alive and one second he's no longer … That's the moment the life goes out of his body."

"At no time were weapons of any type used by anyone involved in this incident."

Former Officer Thomas Lane pointed his gun at Floyd while Floyd was in his car, body camera footage revealed. And Chauvin kneeled on Floyd’s neck for almost 10 minutes.

Chauvin restrained Floyd for so long that Jena Scurry, the 911 dispatcher who handled the call from Cup Foods and watched the arrest from a surveillance camera, said she thought that her "screens had frozen" and reported what she was seeing to her supervisor.

Chauvin was also seen in body-camera footage squeezing Floyd’s fingers in a compliance technique that can cause pain, said Stiger of the LAPD.

"Body worn cameras were on and activated during this incident."

For the most part, yes — but Chauvin’s body camera fell off and landed beneath the squad car during Floyd’s arrest.

At some point, Chauvin put his camera back on, as it showed him talking with witness Charles McMillian after Floyd was taken away in an ambulance.

The prosecution showed the jury the available footage of Floyd’s arrest from Chauvin’s camera, along with the more complete footage from the three other officers’ cameras.

What misleading police statements mean for the public, journalists

"Police are notoriously inaccurate in their press releases and recounting of events," McBride said. "Even when they don't have a stake in the way the story is told, they get it wrong."

In Minneapolis, the city council voted in July 2020 to transfer control of the police media duties from the Minneapolis Police Department to the city. Several city council members said the move was in part a response to the misleading nature of the original statement about Floyd’s murder.

RELATED: Did George Floyd say he ‘ate too many drugs,’ as Derek Chauvin's defense claimed?

Minneapolis Star-Tribune, "Who are the witnesses in the Derek Chauvin trial?" April 15, 2021

Email interview with Mark Osler, professor and Robert and Marion Short Distinguished Chair in Law at the University of St. Thomas School of Law, April 22, 2021

Email interview with Kelly McBride, senior vice president and chair of Craig Newmark Center for Ethics and Leadership at the Poynter Institute for Media Studies, April 22, 2021