Kevin McCarthy
stated on June 17, 2022 in a tweet:
“American oil is … more affordable” than foreign oil.

Pumpjacks draw oil out of the ground in a field near Lovington, N.M. (AP Photo/Charlie Riedel)

We focused on the pocketbook issue in that tweet. Americans are struggling with gas prices that top $5 a gallon, and McCarthy’s pitch that oil from home is more affordable might seem like common sense. Shipping oil across an ocean sounds more expensive than pumping it here at home.

But the power of global market pricing and the cost of getting oil out of the ground and to refineries undercut McCarthy’s claim.

McCarthy’s spokesperson Mark Bednar said the proof lies in the law of supply and demand.

"If we had more American energy production, we could lower the global price by increasing supply," Bednar said.

But even accounting for Bednar’s explanation, McCarthy’s statement runs into a problem of scale. The global market is huge, and American production is relatively small, said analysts with the Federal Reserve Bank of Dallas, a branch of the Federal Reserve System.

"Even under the most optimistic view, U.S. production increases would likely add only a few hundred thousand barrels per day above current forecasts," the analysts wrote in May. "This amounts to a proverbial drop in the bucket in the 100-million-barrel-per-day global oil market."

Global markets matter because the single biggest factor behind the price of gasoline is the price of crude oil. Refineries change crude oil into petroleum products to fuel vehicles.

In April, crude oil accounted for 60% of the price of gasoline, according to the U.S. Energy Information Administration. 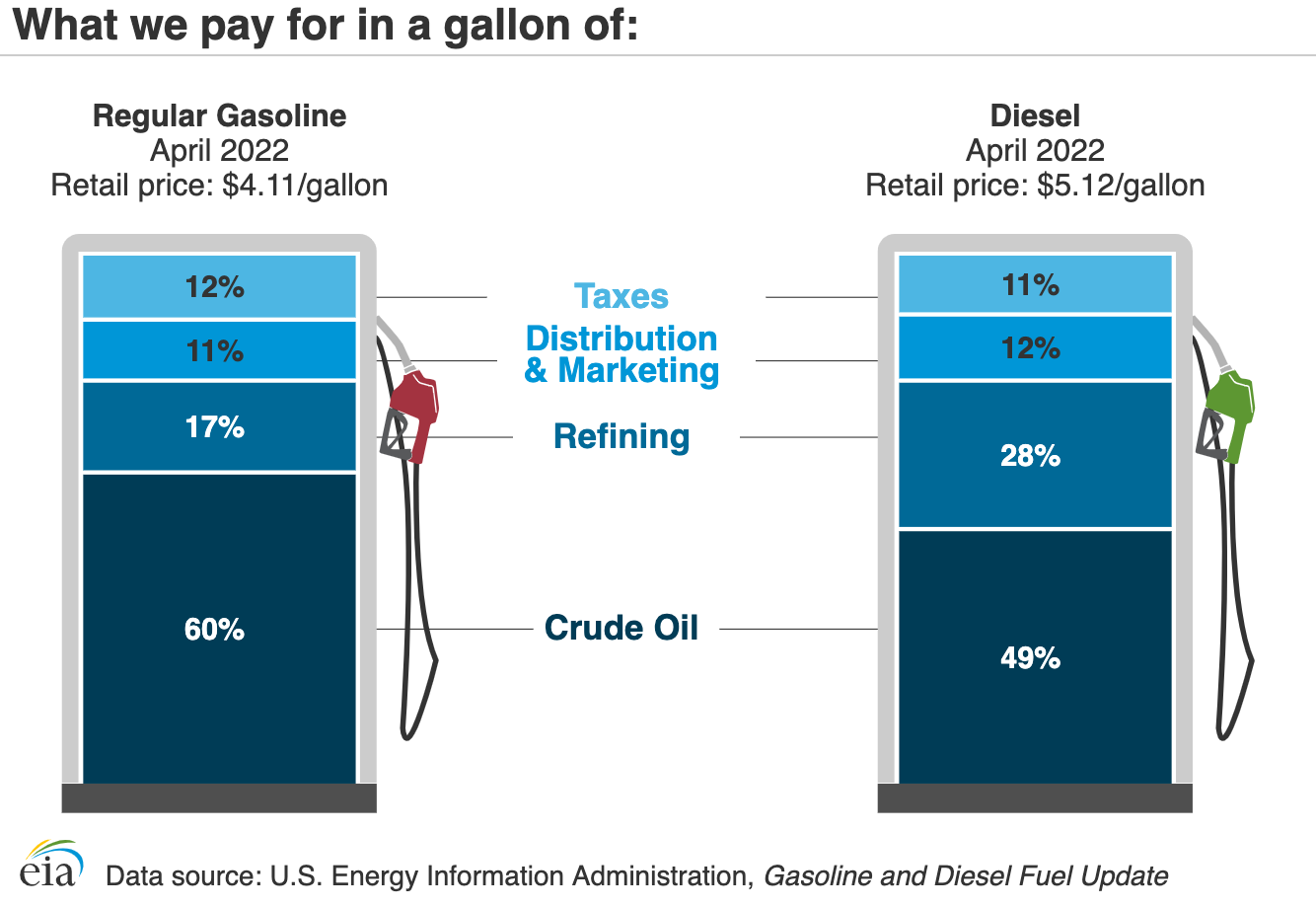 Since the initial economic wallop from the coronavirus in the spring of 2020, demand for oil has risen steadily as business activity has increased. Supply hasn’t been able to keep up due to delays in restoring drilling capacity, higher transportation costs, and sluggish production increases.

And the price of oil on the global market is what American gasoline producers have to deal with.

"The first thing to know about oil is that it is set on a GLOBAL market," MIT energy economist Christopher Knittel tweeted in March. "There is, effectively, one price. So, any supply disruption, anywhere, affects that price and therefore prices in the U.S."

It’s not as though increased domestic production would have no impact, but Knittel said it would be diluted. If American production rose by a whopping 10%, it would add over 1 million barrels a day to global supplies.

Tim Ryan
stated on November 1, 2022 in a town hall event
“J.D. Vance said nothing about” the attack on Paul Pelosi.

"Sadly, that's only 1% of world production," Knittel wrote. "Would it lower prices? Sure. But not by as much as people often think."

And a production hike would take time. Today, the U.S. produces 11.7 million barrels a day. Government forecasters estimate it will take about another year before the country adds another million barrels to that.

For those who argue that trend is because of Biden administration policies, it’s oil producers who have held back investments, as they balance financial goals against the future price of oil.

Looking at what McCarthy actually said — that domestic oil is itself more affordable — the numbers don’t back that up. Saudi oil is easily produced, and transporting it is not a major factor.

"The costs of importing oil from Saudi Arabia are very low," said Eric Lewis, an energy economist at Texas A&M University. "Shipping overseas from a place that has oil export facilities is easy."

In talking about affordability, McCarthy introduced an ambiguous concept. Affordability could be limited to the cost of just getting the oil out of the ground. It could mean that cost, plus the expense of moving the oil to a refinery.

The Energy Information Administration tracks how much refiners pay for domestic and imported oil.

It doesn’t help McCarthy’s case if we look solely at the cost of getting oil out of the ground. In terms of data, this is a tricky area. Particularly for the world’s second largest producer, Saudi Arabia, energy analyst Lutz Kilian at the Federal Reserve Bank of Dallas said there is no official source.

"Saudi Arabia’s numbers are a closely guarded state secret, but are thought to be very low," Kilian said, referring to Saudi production costs.

The private energy research firm Rystad Energy has a unique way of measuring what it takes to produce oil in different regions. Rystad’s yardstick looks at future costs, and so might not match other methods of estimating production costs. But if nothing else, it helps show how different production regions stand relative to each other.

In Rystad’s 2020 analysis, at $31 a barrel, onshore Middle Eastern oil fields have the world’s lowest production cost. For deepwater wells, which would include some U.S. production, the number is $43 a barrel, and for North American oil produced through fracking (hydraulic fracturing), the cost is $44 a barrel. Other North American sources cost even more.

Again, U.S. oil costs more than oil from Saudi Arabia and its neighbors.

His spokesperson said that was true because more oil from the U.S. would increase global supplies and lead to lower prices. That isn’t what McCarthy’s tweet said, but even if that’s what he had in mind, experts said any impact on the price of gasoline would take about a year to materialize and would be modest even then.

Taking McCarthy’s words at face value, domestic oil is not more affordable. Whether looking at the price paid by refineries, or the simple cost of production, domestic oil costs more than imported oil.

Rystad Energy, Rystad Energy ranks the cheapest sources of supply in the oil industry, May 9, 2019

Federal Reserve Bank of Dallas, How the Saudi decision to launch a price war is reshaping the global oil market, April 2, 2020

Marketplace, Domestic oil could increase supply, but it won’t be cheap — or quick, March 9, 2022