Tweets
stated on November 8, 2022 in a tweet:
“There is no chain of custody” for ballots placed in Box No. 3 at Maricopa, Arizona, polling sites.

On his social media platform Truth Social, former President Donald Trump posted, "Reports are coming in from Arizona that the voting machines are not properly working in predominantly Republican/Conservative areas."

The tabulators are the last step for voters after they’ve filled out their ballots. Before voters leave, they place their ballot face down on the machine and watch it as the machine pulls it inside. Optical scanners record each vote.

It turns out, the problem was the printers that churn out ballots on demand. They didn’t print a time code dark enough, and without that, the tabulators wouldn’t accept the ballot. Speaking at about 2 p.m. local time, Maricopa County Board of Supervisors Chairman Bill Gates said the problem had been fixed at 17 centers and work was underway at the rest. Gates said no voter was turned away.

"People were still able to vote, it was just a matter of maybe not voting in the way they wanted to," Gates said.

Earlier in the day, standing in front of one of the tabulators, Gates had explained why this wouldn’t prevent anyone from voting. People could try until the machine cooperated, or they could leave and vote at the closest poll that had no issues. Or, they could put their ballots in a slot on the side of the machine.

"You can simply place it here — you see the No. 3 — and this is a secure box where those ballots will be kept for later this evening, when we’ll bring them in to Central Count to tabulate them," Gates said. 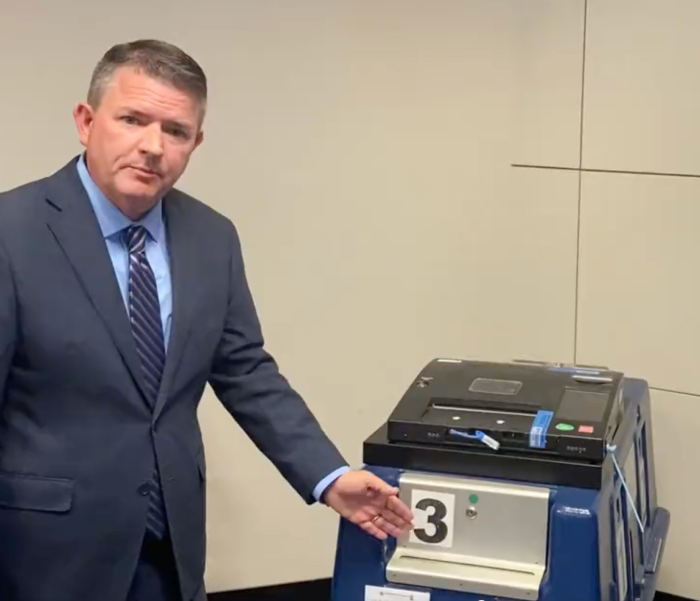 Maricopa County Board of Supervisors Chairman Bill Gates explains the use of the ballot slot on the county’s tabulator machine. (Screenshot)

"Do not put your ballot in Box 3," the tweet said. "There’s no chain of custody for it."

Not a scrap of evidence backs that up.

Maricopa County Recorder Stephen Richer said that ballots placed in the slot would be treated the same as ballots from early voting. The chain of custody protocol is spelled out, and it relies on the participation of people from both parties.

The broken tabulators effectively become ballot drop boxes. Under state and county regulations, bipartisan teams serve as ballot couriers. When these teams pick up ballots, they must complete a ballot transport statement (chain-of-custody form) that is signed by a polling location or vote center inspector "to ensure the lawful hand-off and transportation of ballots."

They place seals on the boxes with ballots. The couriers bring the boxes, with the signed paperwork, to a central vote tabulation center. Access to the center is limited to people with authorized badges. Ballots are only tabulated when political party observers are present.

Gates said this is the process used in the majority of counties across Arizona.

"There’s no problem with this at all," said David Becker, executive director of the Center for Election Innovation and Research, a nonprofit that works with election officials to promote trusted election systems.

Gates said the same printers with the same settings and the same paper had worked smoothly during the primary, and had been recently tested.

"There was nothing to indicate that this issue was going to arise today," Gates said. "Obviously if we had, we would have taken another action."

Gates addressed one other bit of misinformation that had appeared as the snafu unfolded. Republican gubernatorial candidate Kari Lake had warned voters "you should not leave and go to another location without casting a vote. Your provisional ballot at the new location likely will not count."

Gates explained that any voter who wanted to leave would be checked out by a poll worker. That would leave them free to check in at another location.

A tweet said that ballots in Maricopa County that were placed in a slot marked No. 3 would have "no chain of custody."

No evidence backs that up. The county uses bipartisan teams to pick up ballots, put them in sealed containers, and send them with signed chain of custody forms to the county’s central vote tabulation center.