Sean Hannity
stated on June 9, 2022 in a TV segment:
“Donald Trump authorized up to 20,000 National Guard troops to protect the Capitol" before Jan. 6, 2021, but was "rejected" by Nancy Pelosi and Chuck Schumer.

Twenty million Americans tuned in June 9 as the House select committee investigating the Jan. 6, 2021, attack on the U.S. Capitol described how then-President Donald Trump fueled the mob with bogus claims of a stolen election.

The audience watching Fox News got a different story from its hosts: a litany of conspiracy theories from Tucker Carlson and a defense of Trump by Sean Hannity.

Hannity repeatedly claimed that Trump authorized 20,000 National Guard troops for the Capitol before the riot, and that the former president’s efforts to secure the building were thwarted by House Speaker Nancy Pelosi, D-Calif., and Senate Majority Leader Chuck Schumer, D-N.Y.

"If Donald Trump authorized up to 20,000 National Guard troops to protect the Capitol, how does it make sense that they are there on national television blaming Donald Trump for wanting to start an insurrection?" Hannity said on his June 9 show. He repeated the claim several times in the hour, often blaming Pelosi and Schumer, and again the following night.

Trump similarly claimed on June 9 that he "offered up to 20,000 National Guard" prior to the event and that "crazy Nancy Pelosi turned down the offer."

There was no evidence to support such a claim in February 2021, when Trump said on Fox News that he had requested 10,000 National Guard troops but was rebuffed by Pelosi.

There’s still no record of any such authorization being made, or of Pelosi standing in the way. The D.C. National Guard reports "solely to the president of the United States," per its website.

"This is not true," Pelosi’s deputy chief of staff, Drew Hammill, told PolitiFact June 10. "The Speaker of the House doesn’t have the power to do this. No request was made for the National Guard before Jan. 6."

In fact, about 20 minutes before Hannity went on air, the House committee noted that then-Vice President Mike Pence had called for the National Guard on Jan. 6 — not Trump.

Fox News did not respond to a request for comment.

As PolitiFact previously reported, what Trump described in February 2021 as a formal request for 10,000 troops was actually an offhand remark to then-acting Defense Secretary Christopher Miller. Miller said he took it as hyperbole based on Trump’s expectation for a massive crowd. There’s no evidence the remark was handled as an official authorization.

A Vanity Fair reporter who followed Miller during the last week of Trump’s administration detailed the remark in a report. The report said that on Jan. 5, 2021, Miller and his chief of staff Kash Patel were meeting with Trump about an issue related to Iran. (A Defense Department inspector general’s report appeared to place the meeting on Jan. 3.)

"The president, Miller recalled, asked how many troops the Pentagon planned to turn out the following day. "We’re like, ‘We’re going to provide any National Guard support that the District requests,’" Miller responded. "And (Trump) goes, ‘You’re going to need 10,000 people.’ No, I’m not talking bullshit. He said that. And we’re like, ‘Maybe. But you know, someone’s going to have to ask for it.’" At that point Miller remembered the president telling him, "‘You do what you need to do. You do what you need to do.’ He said, ‘You’re going to need 10,000.’ That’s what he said. Swear to God."

Miller chalked it up at the time to Trump being "hyperbolic," Vanity Fair reported. He told lawmakers months later that D.C. Mayor Muriel Bowser’s request for 340 members of the D.C. National Guard for traffic and crowd control was approved, but the Defense Department "received no further request for different or additional support until the Capitol was breached." Before the attack, Miller had signaled opposition to stationing the military outside the Capitol, according to the Defense Department’s inspector general report.

"No other requests were made," then-Army Secretary Ryan McCarthy said the day after the riot.

The Washington Post reported that the 10,000 figure did not get relayed to anyone outside of the Defense Department, citing unnamed former officials. A Defense Department spokesperson previously told PolitiFact that there was "no record of such an order being given" by Trump.

It’s not clear how or when the number claimed jumped from 10,000 to 20,000 — a number of troops that would have rivaled some of the largest National Guard deployments in history. 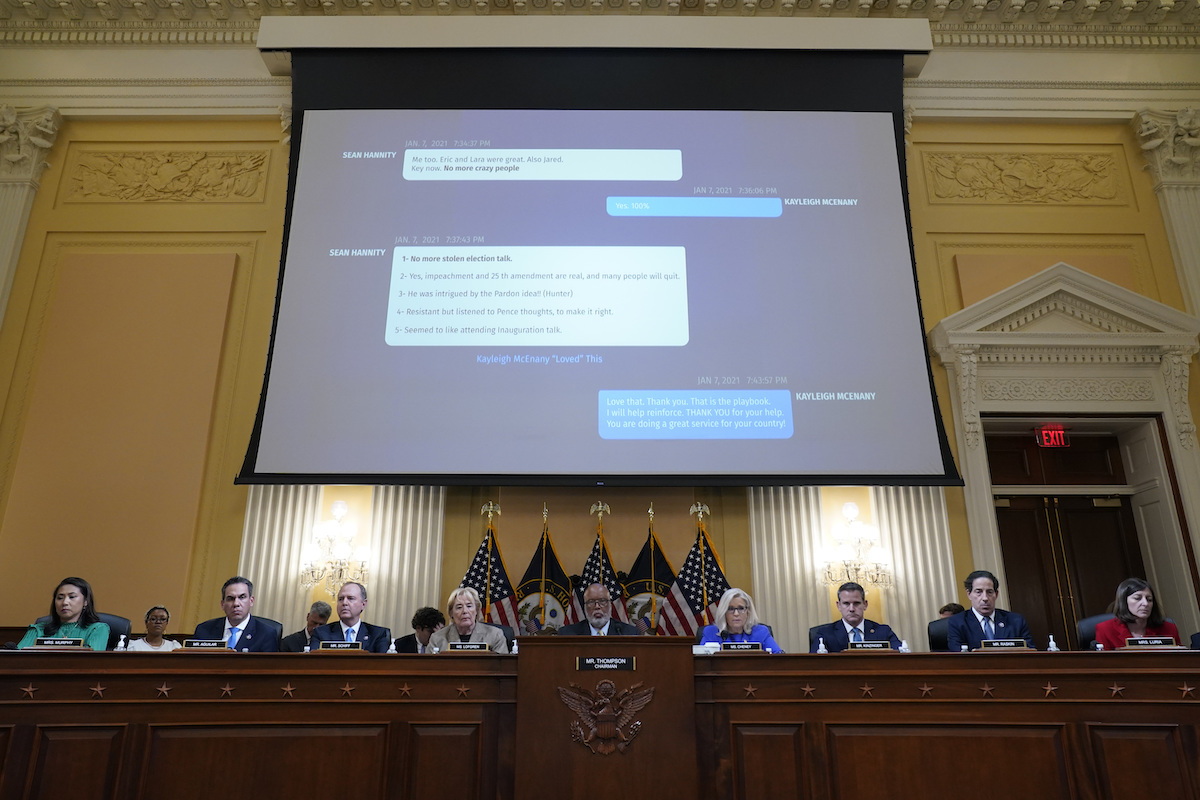 On his show June 9, Hannity brought on Patel, who has helped drive falsehoods in the past and has shared social media posts related to the QAnon conspiracy theory.

In contrast to what Miller told Vanity Fair and lawmakers, Patel told Hannity that in the pre-Jan. 6 meeting between Miller and Trump, Trump officially authorized up to 20,000 National Guard troops. Patel then claimed that they went to Pelosi and "she refused it all," but he spoke only in vague terms when Hannity pressed for more information.

When PolitiFact emailed Patel for evidence that Trump had formally authorized 20,000 troops and Pelosi had refused it, a spokesperson pointed to the Defense Department’s IG report and to the department’s timeline for security planning on Jan. 6, 2021.

Those documents, along with a bipartisan report from the Senate, indicate that members of the Capitol Police Board did have conversations in advance of the Jan. 6 attack about the possibility of seeking more National Guard support. The Pentagon communicated with the Capitol Police to see if they would require further assistance, the documents show, but no additional requests were made; the Senate report said the Capitol Police Board members "did not appear to be fully familiar with the statutory and regulatory requirements for requesting National Guard support."

But neither document makes any reference to a request or authorization of 20,000 National Guard troops, or to Pelosi blocking one.

Paul Irving, then the House Sergeant at Arms, testified in February 2021 that he did not speak with congressional leadership about potentially bringing in National Guard support until Jan. 6.

Plus, the Senate majority leader at the time was Mitch McConnell, R-Ky. — not Schumer.

"Had President Trump ordered 20,000 National Guard soldiers to the Capitol before Jan. 6, it would have happened," said Dwight Stirling, the founder and CEO of the Center for Law and Military Policy. "No one can prevent a presidential order from being followed with regard to where troops go or what they do. That it didn’t occur is evidence that no such order was issued."

Hannity said, "Donald Trump authorized up to 20,000 National Guard troops to protect the Capitol" before Jan. 6, 2021, but was "rejected" by Nancy Pelosi and Chuck Schumer.

There is no record of Trump formally authorizing 20,000 National Guard troops prior to the Jan. 6 attack. There is also no record of Pelosi rejecting such an authorization — and experts said she would not have had the authority to do so as House speaker.

District of Columbia National Guard, "About Us," accessed June 13, 2022

U.S. Senate, "Examining the U.S. Capitol Attack: A Review of the Security, Planning and Response Failures on January 6," June 1, 2021

U.S. Senate, "Written Testimony of USCP Former Chief of Police Steven A. Sund before the Senate Committee on Rules and Administration and the Senate Homeland Security and Government Affairs Committee," Feb. 23, 2021

Vanity Fair, "‘The President Threw Us Under the Bus’: Embedding with Pentagon Leadership in Trump’s Chaotic Last Week," Jan. 22, 2021

U.S. Department of Defense, "Planning and Execution Timeline for the National Guard’s Involvement in the January 6, 2021 Violent Attack at the U.S. Capitol," Jan. 8, 2021

PolitiFact, "No, Pelosi was not calling all the shots for Capitol security officials on Jan. 6," Aug. 5, 2021

PolitiFact, "No, Capitol security is not only Pelosi’s responsibility, but she bears some," Feb. 25, 2021

Email interview with Dwight Stirling, founder and CEO of the Center for Law and Military Policy, June 10, 2022