In the year since Ashli Babbitt was fatally shot trying to force her way further inside the U.S. Capitol during the Jan. 6, 2021, insurrection, a chorus of conservative voices have cast her as a patriot and a martyr, and her death as an unjust assassination.

"She was trying to stop those people from busting up the place, and then had to flee from them," the speaker in the video said. "That’s why she went through the window, and then got shot, got assassinated by that f------- rent-a-cop."

The video offered a conspiratorial retelling of what transpired during one of day’s most scrutinized moments, when Babbitt attempted to climb through the shattered window of a door leading to the Speaker’s Lobby, where lawmakers were being evacuated. It relied on an interpretation of Jan. 6 footage from a right-wing outlet that made unsubstantiated claims about Babbitt’s words, actions and frame of mind in the moments before she died.

In reality, there is no clear evidence that Babbitt was fighting to halt the mob — or that the attack was a false flag spurred on by antifa.

The insurrection was carried out by supporters of then-President Donald Trump, many of them whipped up by his false claims of a stolen election. The officer who fired the bullet that killed Babbitt — Lt. Michael Byrd, a Capitol Police officer for 28 years — was cleared of wrongdoing in two investigations. 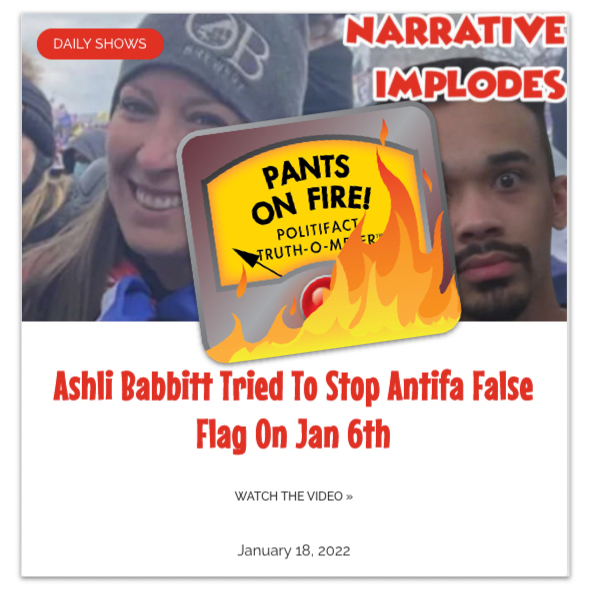 A video spread on YouTube and other platforms wrongly claimed Ashli Babbitt tried to stop an antifa false flag on Jan. 6, 2021.

This video spread widely anyway, racking up 200,000 views on YouTube and tens of thousands more on the alternative platforms like Rumble and Bitchute. It was flagged as part of Facebook’s efforts to combat false news and misinformation on its News Feed. (Read more about our partnership with Facebook.)

A litany of false and conspiratorial claims

The creator of the video is a self-described former Obama voter and special education teacher who now posts live-streams and other content under the persona "the Salty Cracker."

His website has a disclaimer at the bottom of his website that reads, "These are the opinions and ramblings of a lunatic. They are for entertainment purposes only and are probably wrong."

Many of his claims in the nearly 10-minute video were, as promised, wrong:

Throughout his video, the Salty Cracker claimed that Babbitt was trying to stop antifa activists in disguise "who were breaking into the f------ Speaker’s Lobby over here, and then got shot."

Here’s how he described what happened before her death:

But several rioters denied the antifa rumors themselves in social media posts and messages. PolitiFact rated the claim that antifa provoked Babbitt’s shooting Pants on Fire, one of the many falsehoods about the Jan. 6 attack that merited PolitiFact’s 2021 Lie of the Year designation.

"We have no cases of antifa in our database of individuals charged with breaking into the Capitol," said Roderick Cowan, the executive director of the University of Chicago Project on Security and Threats, which maintains a database on the more than 700 people facing charges. "Nor have we ever seen evidence of a named individual who supports antifa there."

Among the rioters nearby when Babbitt died were Zachary Alam, the rioter wearing a red "Make America Great Again" hat who smashed the windows to the Speaker’s Lobby that Babbitt later climbed through; Chad Barrett Jones, who helped bust the glass with a rolled-up Trump flag; and Thomas Baranyi, who wore a Trump-Pence hat and left the Capitol with Babbitt’s blood smeared on his hand.

But what about the pro-Trump mob? Was Babbitt trying to fend those rioters off?

Throughout his video, the Salty Cracker read from an article in the Epoch Times, a pro-Trump outlet, with the headline: "Babbitt tried to stop attack on Capitol Speaker’s Lobby, video shows."

The article largely ignored the actions that prompted Babbitt’s fatal shooting, when she tried to push through the window to the Speaker’s Lobby. In an interview after the riot, Baranyi said the police were warning her to stop, but that "she didn’t heed the call."

The article instead focused on the buildup to that moment, claiming that the footage captured by those who were there, when slowed down, showed Babbitt trying "to prevent the attack, not join it." Some of that footage came from John Sullivan, an activist controversial on both sides of the political spectrum, whose presence fueled the antifa falsehood, and who faces several charges.

The Epoch Times’ evidence for its assertion: that Babbitt had "looks of shock and concern" on her face; that she was "so distressed at the violence, she jumped up and down in frustration"; that she "confronted" Alam before he punched the window she later climbed through; that she winced at his punch; that and she at one point shouted, "Stop! No! Don’t! Wait!"

Those claims are speculative and unsubstantiated. Videos of the incident do not clearly capture all that Babbitt was saying and doing, let alone feeling, at the time.

Whether Babbitt was feeling shocked and concerned, and whether she was jumping because she was frustrated, is also a matter of interpretation.

Other footage from Tayler Hansen, a self-described "independent journalist" whose Twitter account includes statements of support for conservative causes, shows Babbitt leaning toward Alam and appearing to say something. But it’s not clear that she was confronting him.

Experts in multimedia forensics told PolitiFact it’s nearly impossible to discern from Sullivan’s video what Babbitt was saying. She’s far away from Sullivan’s microphone in a loud room with many people shouting, making it difficult to attribute speech directly to her.

"This is a classic ‘cocktail party effect’ recording of an unknown number of speakers, overlapped, speaking loud," said Catalin Grigoras, director of the National Center for Media Forensics at the University of Colorado, Denver. Grigoras and other experts said the science available to experts would likely be unable to isolate Babbitt’s voice from Sullivan’s video.

One rioter recalled for investigators that Babbitt said something along the lines of, "Just open the door. They’re not gonna stop." And another video recorded by Hansen showed Babbitt shouting at the officers. (It’s not clear what Babbitt is saying in that clip, either, experts said.) 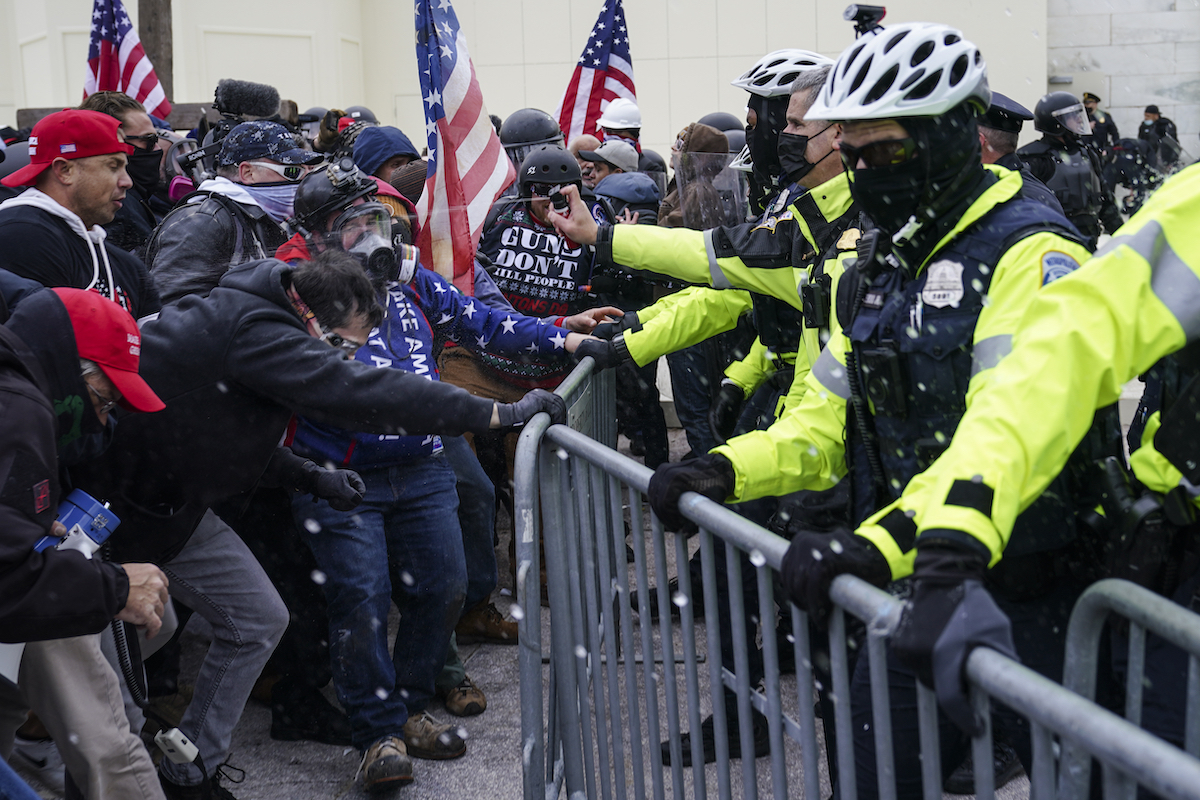 Trump supporters try to break through a police barrier on Jan. 6, 2021, at the Capitol in Washington. (AP)

Hansen told the Epoch Times that Babbitt was "literally trapped" in a corner. Aaron Babbitt said she climbed through the window because she feared for her life and wanted to escape.

But Hansen’s video shows that Babbitt was the first to reach the doors leading to the Speaker’s Lobby. Footage shows her not pinned but moving freely prior to the incident..

The video was posted by a creator whose website includes a disclaimer saying his opinions are meant "for entertainment purposes only and are probably wrong."

In this case, the video’s central claim that Babbitt was fighting to thwart an antifa false flag is a ridiculous rewriting of what happened inside the Capitol. Babbitt was shot as she attempted to climb through the shattered window of a door leading to the Speaker’s Lobby.

There was no documented trace of antifa involvement at the Capitol or in her shooting, and the suggestion that Babbitt was trying to stop the mob’s advances was based largely on speculation about what she was doing, saying and feeling in the moments leading up to her death.

CORRECTION, Jan. 29, 2022: Tayler Hansen's first name was misspelled in an earlier version of this post. It has been corrected.

ABC7 News, "GRAPHIC: The fatal shooting of Ashli Babbitt in the Capitol was caught on video," Jan. 8, 2021

Jayden X on YouTube, "The Insurrection Of The United States Capitol And Shooting Of Ashli Babbitt," Jan. 7, 2021

PolitiFact, "Fact-checking Donald Trump on there being 'no reason' for shooting Ashli Babbitt," July 8, 2021

PolitiFact, "The ridiculous claim that those at the Capitol Jan. 6 resembled a 'normal tourist visit,'" May 13, 2021

Email correspondence with Josh McDermott, associate professor of brain and cognitive sciences at the Massachusetts Institute of Technology, Jan. 21, 2022

Email interview with Catalin Grigoras, associate professor and director of the National Center for Media Forensics at the University of Colorado, Denver, Jan. 21, 2022, and Jan. 20, 2022

Email correspondence with Hany Farid, professor, associate dean and head of school at the University of California, Berkeley School of Information, Jan. 20, 2022