Facebook posts
stated on January 12, 2022 in a Facebook post:
Images show how climate change destroyed the Greenland ice sheet and harmed a polar bear from 2009 to 2019.

The 10-years challenge has been making the rounds on Facebook, with users sharing photos of how they’ve changed within the last decade.

A climate change advocacy group got in on the trend by using purported then-and-now photos of a polar bear and an aerial view of Greenland, showing dramatic changes. Climate change is the "10 years challenge we should really care about," the group’s Jan. 12 post said.

The image, shared by a Facebook page called Green New Deal, shows two split images: one of the ice on Greenland being heavily diminished and another showing a healthy polar bear in 2009 and an emaciated bear in 2019. 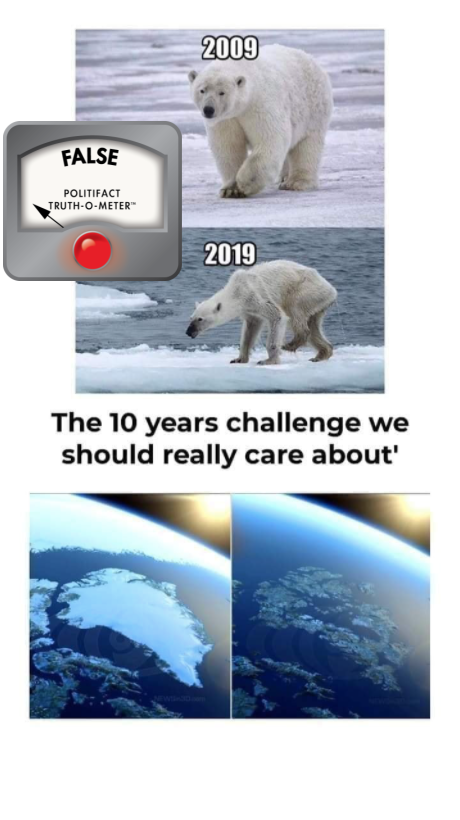 This image uses misleading photos of polar bears and Greenland.

With the "2009 and "2019" time stamps, the post gives the impression that the images depict changes that happened over that 10-year span. That’s not the case.

PolitiFact reached out to The Other 98%, the group that runs the page account, and their CEO John Sellers responded to say they deleted the image from all of their pages. We found similar posts shared across Facebook.

A search of NASA images show that the area of land in the picture is Greenland, which experts also confirmed. (Greenland is geographically in North America, but it belongs to the kingdom of Denmark.) The post portrays the huge island’s ice sheet as almost wiped away as of 2019.

Greenland did have record ice loss of 532 billion tons in 2019, according to NASA. The ice loss added 1.5 millimeters to the average global sea level, which NASA said was enough to cover California with 4 feet of water.

The image makes "no sense," said Mark Serreze, director of the National Snow and Ice Data Center at the University of Colorado Boulder.

"It seems to be showing the Greenland ice sheet present day (left) compared to some rendition of what the island would look like without an ice sheet," Serreze told PolitiFact.

Suburban Virginia Republican Coalition
stated on April 30, 2022 in a seminar.
“CO2 is not a pollutant.”

Serreze said it would be "many centuries" at current warming rates before the Greenland ice sheet disappears. The ice sheet makes up 80% of Greenland and is the second-largest ice sheet in the world, behind the Antarctic ice sheet.

The picture of the emaciated bear was not actually taken in 2019.

In 2015, a photographer named Kerstin Langenberger spotted the bear in the Svalbard archipelago in the Arctic Ocean east of Greenland and took a photo of it, drawing the conclusion that the bear’s poor condition was due to climate change. Langenberger’s picture garnered media attention, including from the CBC in Canada.

But even a defender of polar bears wasn’t buying it.

"When you get claims that this picture of this particular bear is evidence of climate change then you’ve crossed a bridge too far," said Geoff York, Polar Bears International's senior director of conservation, in a CBC interview.

Another expert pointed out that it’s unlikely that the images show the same polar bear. Andrew Derocher, professor in the department of biological sciences at the University of Alberta in Canada, said none of the 19 polar bear populations monitored in Alaska, Canada, Norway and Greenland have gone through such a shift in overall body condition within a 10-year period. The skinny bear’s grim condition could have been due to reasons other than climate change, like disease, advanced age and injury.

"Yes, individuals undergo changes in condition, but an animal (in) such an advanced stage of malnutrition is an extreme situation and not what has been observed on a population level," Derocher said.

Jennifer Francis, acting deputy director and senior scientist at the Woodell Climate Research Center in Massachusetts, said there are studies, like one published in the peer-reviewed journal Nature Climate Change, that indicate polar bears’ health is declining due to rapid sea ice loss. Polar bears use ice to capture sea lions.

But Serreze said there really isn’t a connection between the ice loss in Greenland and the distressed polar bear. "The issue with polar bear habitat is loss of the Arctic Ocean's floating sea ice cover," he said.

A Facebook post claimed to show that within 10 years, climate change has gutted the Greenland ice sheet and caused a healthy polar bear to waste away. The post is exaggerated.

Greenland did lose a record amount of ice in 2019, but the loss recorded in satellite images was not what the post suggested. It’s not clear where or how the "after" photo was generated.

In addition, the picture of the emaciated bear was taken in 2015, not 2019. Experts point out that while polar bears have been affected by climate change, there are other factors that could have contributed to the bear’s poor health.

We rate this 10-year challenge False.

Email interview with Mark Serreze, director of the National Snow and Ice Data Center at the University of Colorado Boulder, Jan. 13, 2022

Email interview with Andrew Derocher, professor in the department of biological sciences at the University of Alberta in Canada, Jan. 13, 2022

Tweets
stated on May 14, 2022 Twitter posts:
The mass shooting in Buffalo, New York was a “false flag event.”

Facebook posts
stated on May 3, 2022 a Facebook post:
An adenovirus is a combination of viruses, gastrointestinal virus, pneumonia and COVID-19 mixed together to “kill our children.”

Bloggers
stated on February 21, 2022 in a blog post:
Joe Biden was holding a medical device in a photo he tweeted during the 2022 Winter Olympics.